The Wizard of Oz at Leeds Playhouse 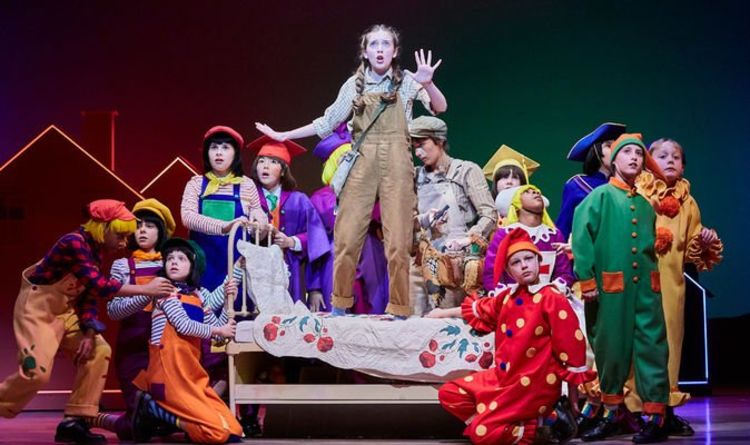 Aware of the task of welcoming potentially a whole new audience to the former West Yorkshire Playhouse after a near two-year hiatus, artistic director James Brining pulls out all the stops in a breathtaking piece of theatrical magic that has you spellbound for its entire 150 minute duration. Gymnasts, dance routines, aerial action, innovative lighting, a brilliant 11-piece band, big screen images and not a weak performance to be found on stage, all simply add to the thrill as we follow our hero along the Yellow Brick Road towards the Emerald City.

At just 14-years-old Lucy Sherman, who is sharing the lead role of Dorothy with fellow teen Agatha Meehan, gives a performance that belies her tender years.

Assured yet vulnerable, naive yet wise, she even manages to overcome being briefly upstaged by a real-life pooch playing Toto for the opening scenes before her best friend takes puppet form for the rest of the show.

Spines tingle as she delivers Over The Rainbow to the awestruck sell-out audience.

The story sticks pretty much to the path of the classic 1939 Judy Garland film which was adapted from L Frank Baum’s original story but extra additions such as the Jitterbug dance routine – making full use of the 20-strong cast – are fresh and fantastic.

Inspirational in the role of Wicked Witch of the West is the marvellous Polly Lister whose simmering unpleasantness as she tries to seize control of her late sister’s ruby red slippers attracts boos of admiration worthy of the nastiest of pantomime villains.

Camper than Christmas itself is the wonderful Marcus Ayton as Lion while Sam Harrison shines (with extra polish) as Tin Man and it is refreshing to see scarecrow played by a female in the form of the energetic Eleanor Sutton.

The songs are all foot-tapping sing-a-long classics that have endured the best part of a century and children in the audience are left on tenterhooks as the Wizard is unmasked before the spectacle reaches its brilliant conclusion.