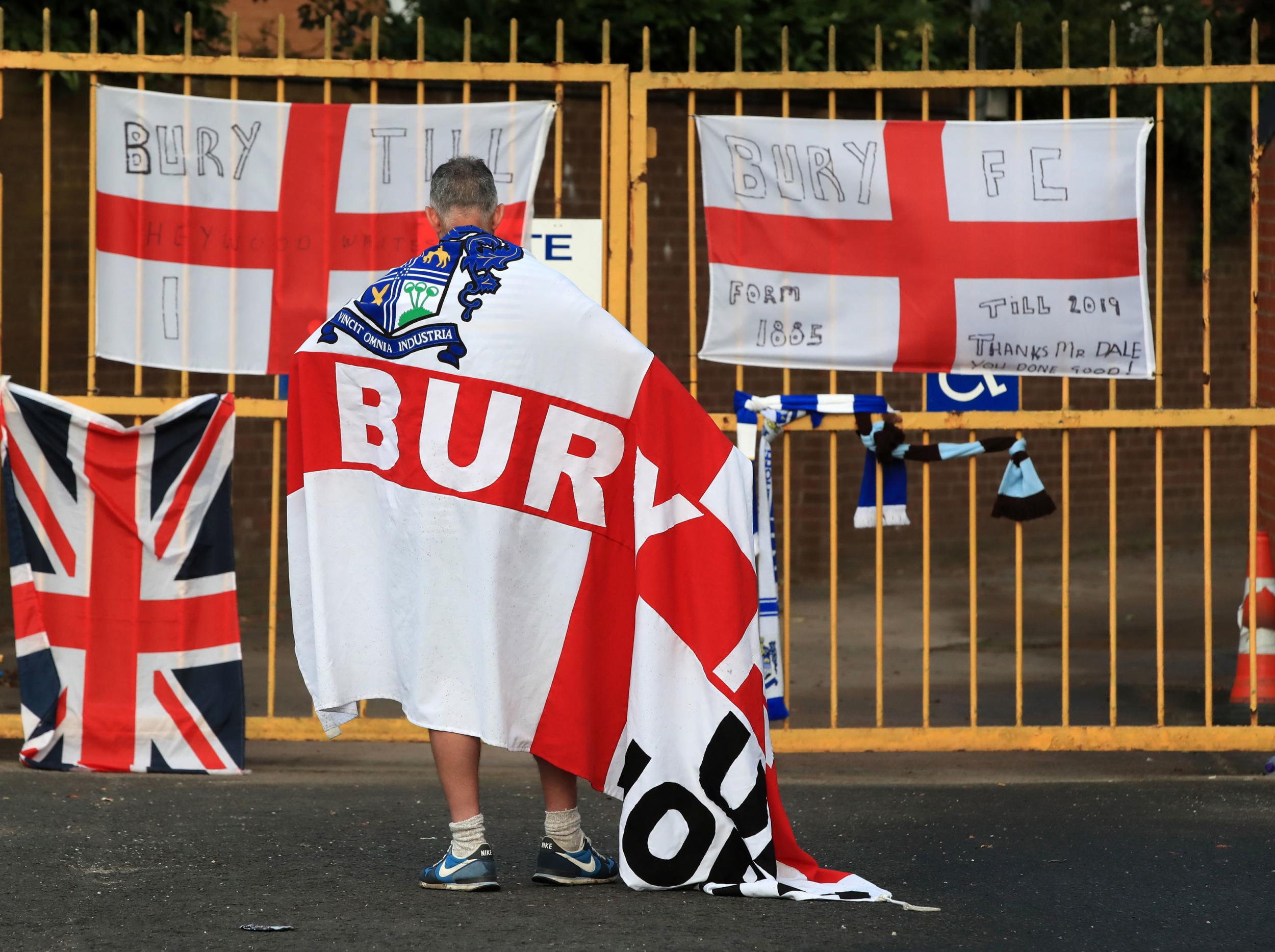 As the visibly devastated supporters of Bury and Bolton Wanderers somehow face up to huge parts of their lives and communities being ripped away, the rest of the English game must now face up to the reality that its very fabric is being ripped apart.

This is a problem that goes way beyond those north-west communities, even though they are the ones currently feeling the pain, currently suffering the reality that social institutions that have been there for well over a century may just disappear.

This is now a very live issue for the game. It is also one that has long been coming.

Although it had been 27 years since the last time a professional club went bust, with Aldershot in 1992, the fact that two could effectively die at the same day emphasises this is no longer going to be a rare occurrence. It is likely to be the trend, eventually proving dismal predictions that 75% of lower-league clubs could go out of business over the next half-decade.

The hope is that a deal can still be done with Football Ventures to save Bolton but it currently looks bleak.

If that doesn’t happen, the technicalities would ensure that both Bury and Bolton go through two-week advisory periods to see if funds can be found to survive. In the words of one source, though, “it’s over once it reaches this stage”.

“The writing’s on the wall.”

But not just from today.

This would be nothing short of a national tragedy, because of what it reflects about 2019 British society, and because there were so many forewarnings.

There are admittedly wider forces involved – from changing societal demographics to young supporters consuming the game in a completely different way – but this situation should still provoke the most focused of questions.

Bolton’s joint-administrator Paul Appleton understandably said on Friday that “there seems little point in apportioning blame because that makes no difference to the staff, players, management, supporters and the community” but it may yet make a difference to the game. There is a lot of blame to go around.

Firstly, there are those questions about the owners – Ken Anderson and Steve Dale – but not just regarding their ruinous running of the clubs.

There’s also how those owners are even there in the first place: how did the game allow this?

With Bolton, how exactly did the EFL allow a man previously banned from serving as a company director – and who then paid himself £525,000 and his son £125,000 for “consultancy” – to buy the club?

Around the time of the purchase, figures in football finance told concerned members of the supporters’ trust that it was “a bad deal” and “a matter of time before it fell apart”.

That has proven depressingly true.

At Bury, eight months after Dale bought the club for £1, the EFL are still waiting for evidence he can meet the financial commitments that come with owning a League One club. There is instead a lot of evidence of a track record in selling the assets of struggling companies.

The EFL must start to properly look at its regulations for ownership, but the greater discussion for the game is that such concerns did not start with the current ownerships. Bolton and Bury are both among many clubs who have had their own specific issues, but all borne of the same collective problem.

They have both been stretched to breaking point by the huge wealth gaps in English football, that create this unsustainable upward drag, led by a set of elite clubs who may as well be operating in a different world.

It is certainly a world alien to what Bury have been operating in.

That Bolton were so recently in the Premier League, and were founding members of the Football League, only further layers the issue. Many feel the problems do go back to the expenditure of their time at the top. They have gone all the way to rock-bottom, in a bell-weather fable for the game.

So soon after a period where they were signing outright international stars, they can barely get local buyers, but that is the case for Bury and many such clubs.

Hence the pointed question posed to the Independent by David Bick, the chairman of Square1 Consulting, who has been involved in lot of football finance.

“If you were starting a football league club now, would you put a club in Bolton?”

This is the greatest problem.

It just doesn’t make financial sense. It would be an illogical move, in a game that is seeing its very structure get altered.

“The smart business people have looked at it and think it’s not worth bothering with,” Ian Bridge, of the Bolton Wanderers Supporters Trust, recently told the Independent.

One source meanwhile says that many parties initially interested in bidding for Bolton thought the purchase would have included the Bolton Whites. That is the depressing reality, that buying the club was only valuable in a financial sense insofar as its assets could be sold, and the stadium perhaps demolished to build apartments.

Instead, should no deal be agreed, those assets will next be sold to pay off creditors as “the process of closing down the company” starts.

This would ultimately lead to the liquidation of the clubs, their expulsions from the EFL, the loss of hundreds of jobs and – more than anything – the loss of social institutions that have been there for over a century.

It may also, however, lead to something else. It says much about where football is that the worst-case scenario could actually be the best thing for these institutions’ identities, as it would allow supporters to reset and organically rebuild clubs that are solely owned by them; that many supporters of the biggest clubs would envy.

Back in 1992, Aldershot Town were formed out of the ashes of Aldershot. It took them 16 years to get back into the Football League.

This may well be the journey Bolton and Bury face. This is what they have to get their heads around, now that there is no football match to go to. A galling prospect, but maybe the only workable solution for community clubs against the hyper-globalisation of the top end of the game.

Right now, in one of those more ironic inevitabilities that the intangibles of football somehow conjure, Bolton and Bury are currently scheduled to meet in League One on Sunday 8 September at noon. The match is similarly set to be shown on Sky Sports. The same broadcaster on Tuesday temporarily had a countdown clock, for the 5pm deadline the EFL set the two clubs. Their situations were in-studio treated in the same excitable tones as transfer news; their potential deaths treated as entertainment.

If that game doesn’t take place, we’ll all watch something else, move onto another things. The fans of Bolton and Bury can’t, though. The game, meanwhile, shouldn’t.

This is likely its immediate future: so many clubs consigned to the past.

READ  Liverpool legend Jamie Carragher leaves Roberto Firmino and Alisson out of team of the season
Share on FacebookShare on TwitterShare on PinterestShare on Reddit
newsgrooveAugust 27, 2019