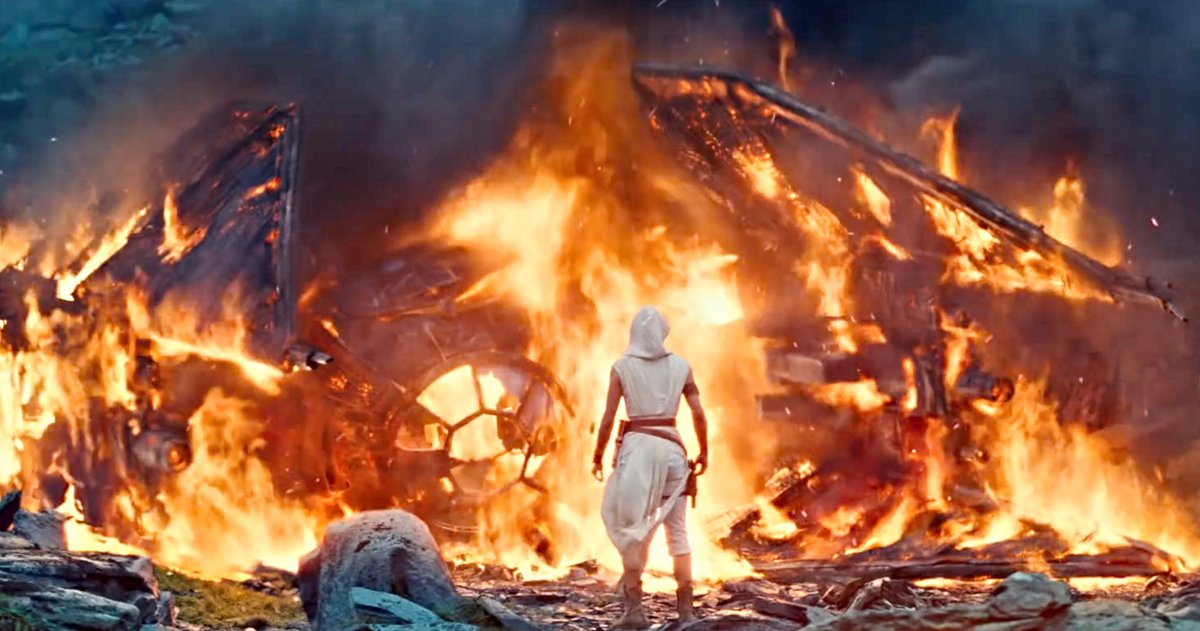 Star Wars: The Rise of Skywalker TV spot takes Rey back to Ahch-To. It seems that Rey has some unfinished business at the first Jedi Temple where Luke Skywalker exiled himself in The Last Jedi. The last installment in the Skywalker Saga is now only weeks away and Disney and Lucasfilm have thrown the marketing campaign into overdrive, which has thankfully given Star Wars fans a sneak peek at some brand-new footage over the past few weeks.

“This will be the final word in the story of Skywalker!” declares Emperor Palpatine in The Rise of Skywalker TV spot. However, that isn’t the most interesting thing about the new footage. Instead, it’s a striking image of Kylo Ren’s TIE Silencer destroyed on the island of Ahch-To. Rey stares down the flaming wreck with the familiar area in the background. This is more than likely the location where Rey will come face to face with Dark Rey, though that obviously has not been officially confirmed by Lucasfilm.

The Phantom Menace fans will notice John Williams’ iconic theme “Duel of the Fates” is the soundtrack to the latest look at The Rise of Skywalker. It appears J.J. Abrams really went for trying to wrap up all nine of the movies in the Skywalker Saga, which had to be a pretty hard thing to put together. As for hearing the return of Palpatine, we have yet to see him on the screen just yet. Abrams said he believes it would have been “weird” to not include the villain in the movie, especially after going back and looking at what came before.

READ  Star Wars 9 ending completely RIPPED OFF this Game of Thrones final scene? What the Force?

J.J. Abrams has been a lot more forthcoming with information about The Rise of Skywalker than he was with The Force Awakens or how Rian Johnson was with The Last Jedi. “But I do feel about this movie, because it is the end of something everyone knows – I don’t want to be coy. I feel very confident about what the movie is,” said the director when asked about the sudden shift. We were teased with Palpatine’s return right from the start, we have been teased with the wreckage of the Death Star 2, and even the return of the Ewoks.

While J.J. Abrams has been letting Star Wars fans in on more information this time around, there are a lot of surprises in The Rise of Skywalker and many believe they are going to be massive, due to what the director has already revealed. Regardless, fans are already pretty excited to see how everything is going to come to an end. The initial box office numbers for the debut weekend are indicating that the movie will be the lowest opening of the sequel trilogy. However, that could all change once the early reactions hit the internet. You can check out the latest TV spot above, thanks to the Star Wars YouTube channel.