The Duchess of Cambridge's most glamorous gowns 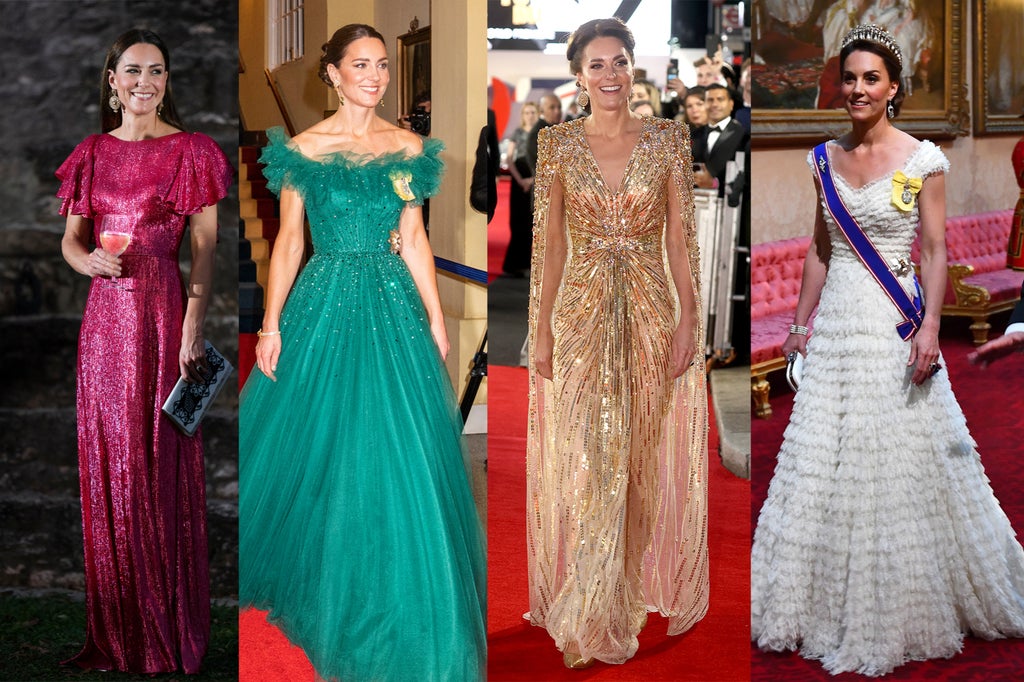 When it comes to dressing the part, the Duchess of Cambridge rarely misses. And thanks to a constant succession of glittering state dinners, royal appointments and a fair few red carpet appearances, we have seen her slip into many standout ballgowns over the years.

Her formal wardrobe is filled with her favourite designers, and Kate is famously keen to support home grown British talent. London based designers including Erdem, Emilia Wickstead and Christopher Kane have dressed her on numerous occasions, and succeeded in orchestrating some spectacles.

When it comes to the duchess’ glitziest of statements, however, Jenny Packham has been on speed-dial for years. The British designer, who studied at Saint Martin’s School of Art and held her first presentation in 1988, has been behind some of the most memorable royal gowns.

The sparkling gold, sequin caped dress Kate wore to storm the James Bond ‘No Time To Die’ red carpet in December last year was Packham at her best. And during 2022’s royal Caribbean tour, the crystal embellished, off-the-shoulder green tulle dress the duchess wore for a Jamaican state dinner also proved the designer knows how to pull off the perfect princess moments.

Kate’s other trusted go-to is Alexander McQueen. While the namesake designer died in 2010, Sarah Burton, who had started at the brand as an intern, has helmed it as creative director ever since. She was behind Kate’s intricate lace wedding dress from 2011, and has since dressed the duchess for National Portrait Gallery openings and UK state dinners. A highlight for the brand was the opportunity to robe the queen-to-be for her 40th birthday portraits, photographed by Paolo Roversi.

For the 2020 BAFTA Awards, the mum-of-three proved her knack for recycling her favourite frocks. Adhering to the dress code which encouraged guests to re-wear something in their wardrobe, Kate opted for an embellished Alexander McQueen gold and white gown she had first worn to a state dinner in Malaysia in 2012.

It is also no secret the duchess is game to have some fun with fashion, too. Nowhere is that more clear than her outings in The Vampire’s Wife. The London-based brand, founded in 2014 by Susie Cave who is married to post-punk Australian singer Nick Cave, is famous for its striking metallic dresses which come with a dose of gothic glamour.

On a trip to Belize, part of the royal tour of the Caribbean celebrating Queen Elizabeth’s Platinum Jubilee this year, the duchess turned heads in the fuchsia shade ‘Light Sleeper’ dress, bought from The Vampire’s Wife for £2,500. It was yet another example of Kate’s evening wear motto: if you have to do it, do it in style.

Crossword roundup: Tory party pickles and how would you clue chicken kyiv?