The boy gets to grips with a jigsaw map of Ireland


Bits of Ireland flew from the table, their stumpy, wooden forms scattering in dismal flight across the living room. We were undertaking a time-honoured tradition for my wife’s family, the 32-piece Map of Ireland jigsaw which has been in her family for three decades, and which we decided we’d try on the boy as an alternative to his ever-growing coterie of electrical appliances.

My wife has had this jigsaw since she was a child, and it’s inordinately pleasing, depicting each of Ireland’s 32 counties in red, blue, green and yellow so you can slot them all together. She takes great pride in how quickly she can complete it – two minutes – and how long it takes me to do the same – closer to five minutes – without ever conceding that she has had a 30-year head start, and the privilege of an education in the Republic of Ireland. There, the lower three-quarters of the island are actually acknowledged, as opposed to the TV news of my own Northern Irish childhood, which insisted that the bottom part of the landmass didn’t even have weather.

Had my son any respect for Irish nationhood he would have sat down and marvelled at the little squiggly pieces in front of him, and set to work arranging them into the ear-shaped island we know and love. Instead, he clumped a few pieces into corners where they did not belong, before picking up every last county and hurling it as far as he could.

As a metaphor for my son’s ambivalence towards his Irish heritage, this would be heavy-handed enough to make it into the canon of great early 20th-century Irish theatre but, unfortunately, the only boards he and I were now treading were on our living-room floor; me trying to gather up the 32 counties of Ireland on my hands and knees; him slapping my upturned arse and laughing.

This frustration is, of course, every toddler’s love/hate relationship with their own swiftly advancing co-ordination skills. These have seen him build ever more ingenious and ornate bridges and stations for his trains, blocks and playsets, each festooned with more bits and bobs than a Catalan cathedral. Unfortunately, if predictably, these sessions never end with a clap of the hands and a careful tidy-up of his workspace. No, they always terminate with some small error, some gap in his abilities, raising his anger to a fever pitch that results in the entire edifice being destroyed by his own hand, transforming our little Gaudi into a little Godzilla in a matter of seconds.

It’s intriguing to observe this nascent anger with creation, his earliest annoyance with himself over a job poorly done. But luckily, like any great craftsman, his tantrums never last too long. Soon he’s padding toward me, with something in his hand. He puts Galway, Clare and Limerick on the board, as far away from their actual locations as would be possible in such a small space, but he does so nonetheless. I settle in for another go, as he lies on his belly to retrieve as many counties as he can beneath couch and coffee table, most of which he’ll take some time to retrieve. It’s a long way to Tipperary, but we’ll get there eventually.

READ  Woman who had ‘one last try’ to have baby following IVF miscarriage has triplets
Share on FacebookShare on TwitterShare on PinterestShare on Reddit
newsgrooveFebruary 7, 2021 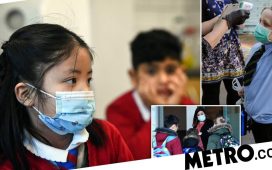