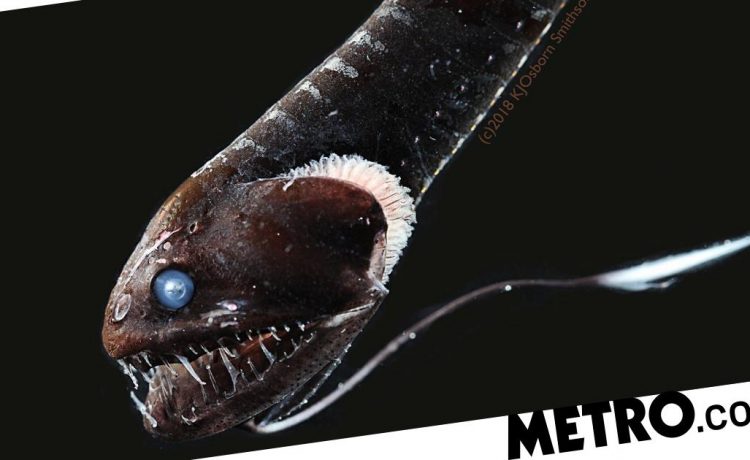 Fish living in the ocean’s murky depths have evolved ultra-black skin, making them virtually impossible to pick out from the shadows.

At least 16 species – including dragon fish and fangtooth – escape predators using their own natural ‘stealth wear’ to absorb over 99% of the light hitting them.

The dark-as-night camouflage comes from tiny ‘packets of pigments’ on their skin called melanosomes, which are very different to other black coloured animals.

Co-author Dr Karen Osborn, of the Smithsonian National Museum of Natural History in the United States, said: ‘If you want to blend in with the infinite blackness of your surroundings, sucking up every photon that hits you is a great way to go.

‘Mimicking this strategy could help engineers develop less expensive, flexible and more durable ultra-black materials for use in optical technology, such as telescopes and cameras, and for camouflage.’

Sunlight, under the right conditions, can reach 1000 metres below the ocean, but there is rarely any visible light below 200 metres.

Animals living at these depths are forced to make their own light, known as bioluminescence, to spot their prey.

The team ‘scooped up’ nearly 40 black fish swimming up to a mile below the surface in Monterey Bay and the Gulf of Mexico, using a trawl net and unmanned marine vehicle.

They then measured how much light was being reflected off each fish using a spectrometer and found 16 species reflected less than half a per cent of light, making them 20 times darker than everyday black objects like paper and tires.

Anglerfish, which are about the size of a ‘golf tee’, were found the darkest species, reflecting just 0.04 per cent of light.

Only one other animal in the world is known to be as dark, the birds-of-paradise of Papua New Guinea.

Taking pictures of the fish proved difficult, even with sophisticated equipment, because the cameras could not capture their features.

Dr Osborn said: ‘It didn’t matter how you set up the camera or lighting — they just sucked up all the light.’

Both have tiny cell-structures called melanosomes, which contain melanin – the same pigment found that determines the colour of human skin.

But melanosomes in the ultra-black fish were a different shape and size, looking more like a tic-tac than tiny pearls and forming a continuous sheet around the body, unlike normal black skin, which contains pigment-less gaps.

Co-author doctoral student Alexander Davis at Duke University said: ‘Melanosomes are packed into the skin cells like a tiny gumball machine, where all of the gumballs are of just the right size and shape to trap light within the machine.

‘Their ultra-black camouflage could be the difference between eating and getting eaten.’

Some birds and butterflies also trap enough light to produce ultra-black surfaces, but not in the same way.

These animals combine a layer of melanin with light-capturing structures, shaped like tiny tubes or boxes.

Dr Osborn said: ‘This is the only system that we know of that’s using the pigment itself to control any initially unabsorbed light.’

The researchers hope their findings could pave the way toward making new light-capturing materials.

Dr Osborn added: ‘Adopting this efficient design strategy could improve the manufacture of ultra-black materials, which currently use an architecture more like what is found in ultra-black birds and butterflies.

‘Instead of building some kind of structure that traps the light, if you were to make the absorbing pigment the right size and shape, you could achieve the same absorption potentially a lot cheaper and [make the material] a lot less fragile.’

The findings were published in the journal Current Biology.