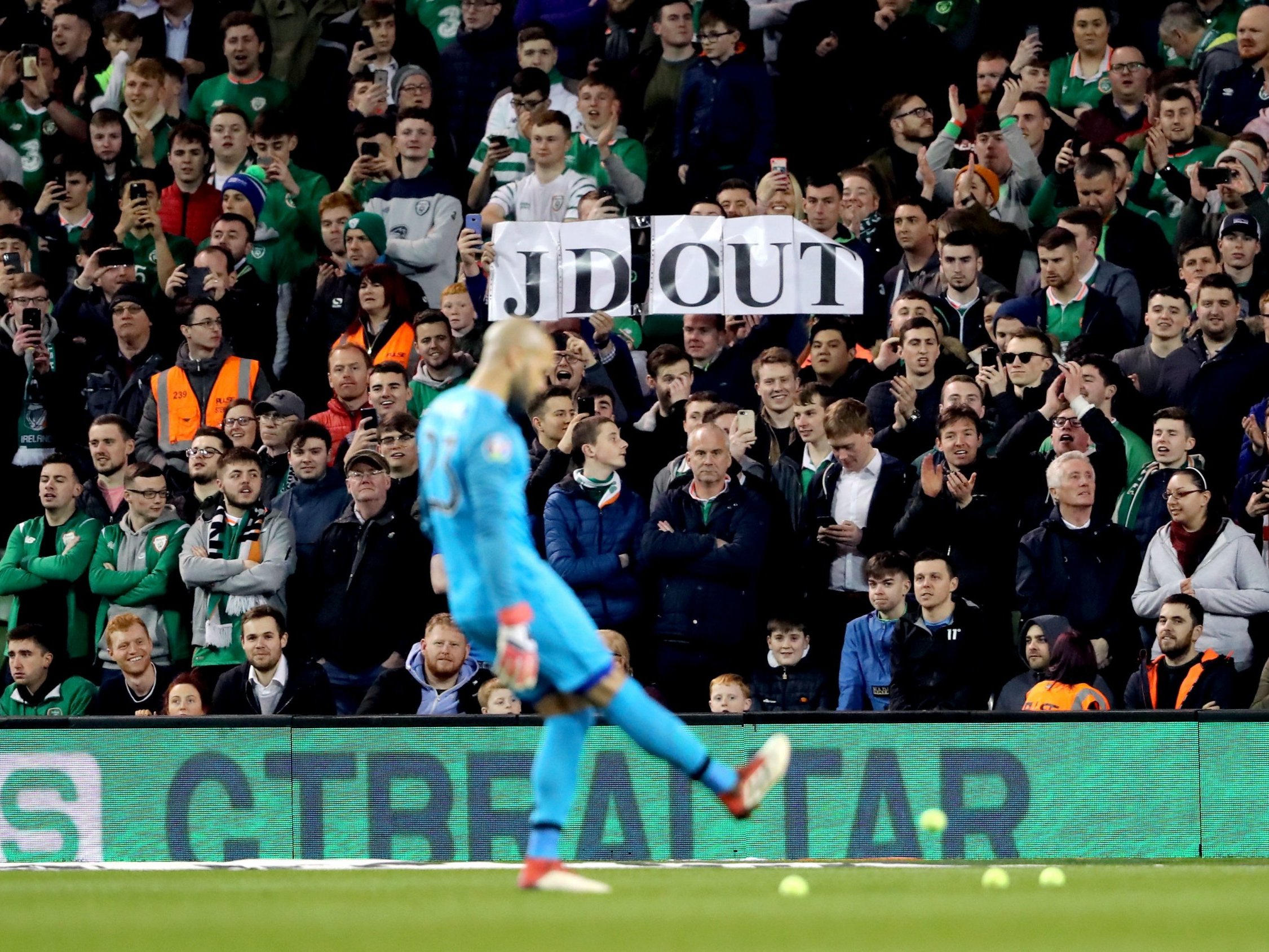 However, Irish fans disrupted the game by throwing tennis balls onto the pitch in protest at chief executive John Delaney’s continued role in the Football Association of Ireland (FAI).

Ireland, who had scraped their way to a 1-0 win over Group D minnows Gibraltar on Saturday evening, were more than value for the points as they won by the same score at the Aviva Stadium with the Georgians rarely looking like ending their wait for a win over the Irish at the 10th attempt.

Hourihane’s 39th-minute free-kick ultimately settled the game, although goalkeeper Darren Randolph had to make a good reaction save to deny Valerian Gvilia an equaliser and Jaba Kankava hit the post five minutes from time.

But anything less than victory would have been harsh on the hosts, who rose to the occasion and turned in a stirring display which could and probably should have resulted in a much more convincing scoreline.

Play was held up for three minutes late in the first half while Ireland waited to take a free kick deep in Georgian territory as stewards cleared dozens of tennis balls thrown on to the pitch by fans angry at the FAI for moving Delaney sideways into a new role.

Delaney is due to appear before lawmakers on April 10 to explain a 100,000 euro ($113,000) personal loan, provided to the FAI two years ago to help his employer with what it called a short-term cash flow issue.

Delaney’s loan to the FAI, which did not appear in the FAI’s audited accounts and prompted questions about the body’s financial position, has been a major news story since the Sunday Times first reported it 10 days ago.

Delaney failed in a court application to prevent the disclosure, the newspaper said.

The former CEO said it was the only time he gave such a loan and it was repaid in full.

Sport Ireland, the state body responsible for sports development, said it wrote to the FAI President seeking urgent clarification from the FAI Board concerning the loan, including its circumstances and its repayment.

As Executive Vice President – a new role created just as he stepped aside as CEO – Delaney will have responsibility for a range of international matters including those relating to FIFA and UEFA and FAI tournament bidding projects. He will work closely with the new CEO, the FAI said.

The FAI said Delaney’s move to a new role was the result of a review of its senior management structure which was commissioned in February and carried out in recent weeks.

Hull City fans disrupted a League Cup tie against Bolton Wanderers in 1998 by throwing tennis balls in protest at development plans by then owner David Lloyd, a former tennis player. He sold the club later the same year.

Fans of Borussia Dortmund, Sevilla, Basel and Luzern, have all thrown tennis balls in protest at kickoff times.