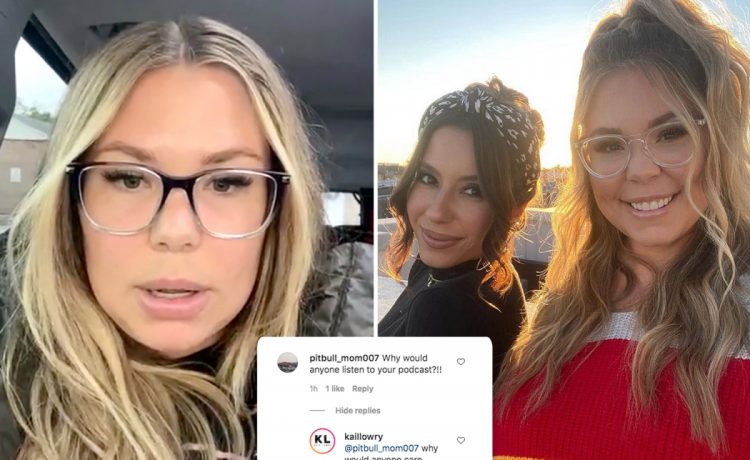 TEEN Mom 2 star Kailyn Lowry clapped back at a troll who slammed her podcast with Vee Rivera.

The comment comes as the 29-year-old reality star continues to defend herself.

🍼  Follow all our latest news & stories on Teen Mom.

On Tuesday, the MTV star promoted their podcast by sharing a photo of her happily posing next to Vee.

Kailyn wrote in the caption: “it’s BABY MAMA TUESDAY & I know I’m late. Have y’all listened to the new episode? We cover so many things & talk about how Vee was able to commit & settle down with Jo. We also talked about the Cecil Hotel. Have y’all watched the docuseries on Netflix? Should Vee & I stay there when/if it reopens?! 😳”

While many of Kailyn’s followers commented that the women were “beautiful” and asked where they can listen to the podcasts, one person left a more negative comment.

The troll wrote: “Why would anyone listen to your podcast?!!”

The Teen Mom 2 star stood up for herself as she responded: “Why would anyone care about this comment?”

Kailyn co-hosts the podcast with Vee, who is married to her first baby daddy Jo Rivera.

The reality star and Jo share 11-year-old son Isaac, while she is also the mother to seven-year-old son Lincoln with ex-husband Javi Marroquin and three-year-old son Lux and six-month-old son Creed with ex Chris Lopez.

Kailyn is no stranger to standing up to her haters, as she previously defended herself against troll that criticized her for taking her four sons out during the coronavirus pandemic.

Season 9 was filmed as the outbreak of coronavirus hit America.

Who’s in the cast this season?

Who are their boyfriends, husbands and baby daddies?

The TV personality began: “So I am doing this story because I keep seeing trolls on Instagram pretty much drag me across the floor for doing anything during Covid in this whole pandemic.

“So I just want to reiterate the fact that I get tested and so do my kids three times a week, and that all being said any person that I film with on the show for Teen Mom next season they’re also being tested three times before they come film with me in person.”

She continued: “So that is why any meetings that you guys see with my builder or anything that I do for the podcast, every single person that I film with has been tested three times prior to filming.

Naked Attraction contestant was kicked off set after getting ‘over excited’

“So I just wanted this to be a little PSA for the trolls and the people that love to literally pick apart everything that I do.”

“So just let that be known now and save this for when Teen Mom airs,” Kailyn laughed before adding: “I’m really over being dragged for doing things during Covid and the pandemic and stuff because we are trying really hard to be safe.”