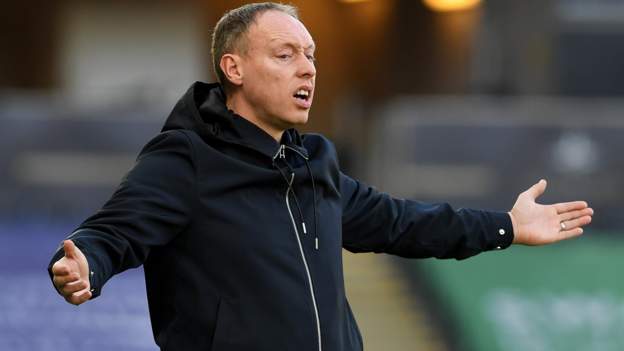 Steve Cooper has told Swansea City’s players to put fatigue to one side and focus instead on maintaining their push for automatic promotion.

Cooper says his squad is thin in areas – with a lack of forwards a particular concern – going into the final third of the Championship season.

But after two defeats in Swansea’s last three matches, head coach Cooper has brushed off questions about whether his team is tired.

“It doesn’t matter if they are (tired) or they are not – it’s the season and the schedule we are in.

“Even if they are, it doesn’t mean you can’t play well and win, so it’s irrelevant really whether they are or they aren’t.”

Swansea were beaten by Bristol City last Saturday having gone down at Huddersfield seven days earlier, and they let in seven goals across the two defeats.

They had conceded only 15 league goals all season until a difficult week which has left Cooper’s players searching for a response when they go to mid-table Stoke City on Wednesday.

Cooper hinted that he could make changes at Stoke, the first of six games in 17 days prior to the March international break, but there is little room for manoeuvre in attack.

Andre Ayew, whose penalty against Bristol City was only a second goal in 10 games, and Jamal Lowe, who has not scored in his last nine appearances, are the only senior forward options available after Jordan Morris joined Liam Cullen and Wayne Routledge on the sidelines.

“We haven’t got lots of options but sometimes you get dealt these cards and you have to deal with it and get on with it,” Cooper said.

“There is obviously some lack of strength in depth some areas but that’s where we are at and we have to get on with it.”

Cooper ruled out the idea of looking at free agents – who can be signed outside transfer windows – to bolster his attacking options that do include January recruit Morgan Whittaker, 20.

The Swansea boss made it clear during the January window he wanted to sign a senior centre-forward but did not get his wish.

Asked whether his side are now counting the cost of their failure to act in January, Cooper said: “I think we need to judge that at the end of the season, not now.

“I am not in the mood for talking about things like that because there are still 15 games to go and a lot can happen.”

READ  Julian Wilson not fazed by shark scares at Margaret River Pro
Share on FacebookShare on TwitterShare on PinterestShare on Reddit
newsgrooveMarch 1, 2021