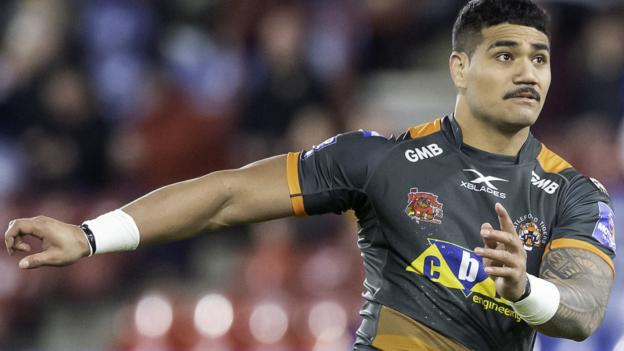 Peter Mata’utia kicked a dramatic golden-point drop goal to give Castleford Tigers a thrilling extra-time win against Huddersfield Giants at The Jungle.

Lee Gaskell’s hat-trick of tries was not enough for the Giants as they were beaten in the seventh minute of extra time.

The teams traded blows in a classic but could not be separated in 80 minutes.

That meant a 10-minute ‘golden point’ period under new rules for this season.

Mata’utia kicked a 12th minute penalty to open the scoring for Castleford and doubled the lead eight minutes later when he slotted home another from 40 metres.

But on 25 minutes Gaskell surged over for Huddersfield for the first try of the game with Olly Russell adding the extras to put them ahead.

And the pair took just six minutes more to add another try and goal.

Greg Minikin reduced the lead when he pounced on a loose ball and crossed for Castleford’s opening try with Mata’utia converting.

Jermaine McGillivray had a try disallowed for the visitors for a knock-on early in the second half before Mata’utia slotted another kick to draw Castleford level.

Gaskell completed his hat-trick on 57 minutes after a break by Darnelll McIntosh with Russell adding the extras, but Castleford responded immediately with Liam Watts going over and Mata’utia converting to make it 18-18.

Mata’utia’s fifth successful kick edged Castleford ahead but Russell responded to make it 20-20.

Joe Wardle went over for Huddersfield and Russell converted but this time it was Castleford who hit back with Grant Millington’s try converted by Mata’utia to take the game to extra time, where Mata’utia won it for the hosts.