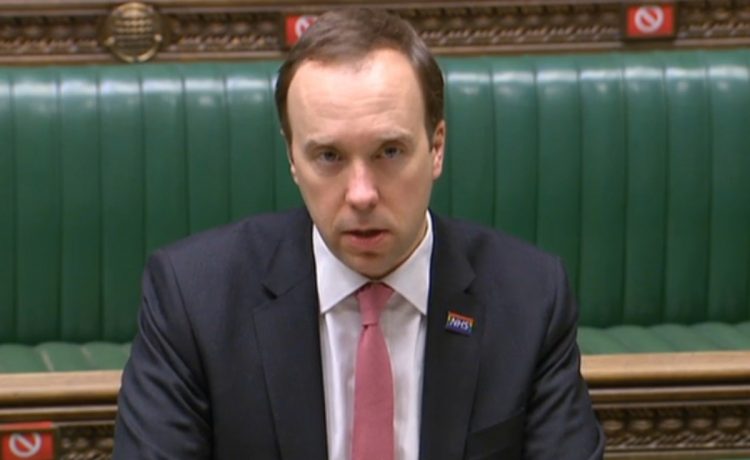 BRITISH summer holidays abroad are in doubt today after Matt Hancock suggested the hotel quarantine rules may have to last until the autumn.

The Health Secretary was asked about how long the new tough border measures might be in place for – but was unable to give a specific answer.

Brits now face a range of extra measures at the border to try and stop any new variants from coming in from abroad, including:

Tory MP Huw Merriman pressed Mr Hancock on how long the measures would likely be in place.

The contracts for hotels are advertised to run until the end of March at the very earliest.

Government sources stressed they would remain constantly under review but couldn’t give an end-date – dashing holiday hopes for millions.

Matt Hancock told the House of Commons today: “We want of course to be able to exit from this into a system of safe international travel as soon as is practicable and as soon as is safe.

“Professor JVT set out some of the details we need to see in the effectiveness of the current vaccines on the variants of concern in order to have that assurance, and if that isn’t forthcoming then we’ll need to vaccinate with a further booster jab in the Autumn on which we’re working with the vaccine industry.

“These are the uncertainties within which we’re operating hence for now my judgement is the package we’ve announced today is the right one.”

Last night Jonathan Van Tam suggested that the more elaborate people’s holiday plans were, the more likely they were to get cancelled.

Speaking at Downing Street last night he said: “The more elaborate your plans are for summer holidays, in terms of crossing borders, in terms of house mixing, given where we are now, I think you just have to say, you’re stepping into making guesses about the unknown.

He added: “We just don’t have the data, it’s just too early.”

The Health Secretary said the easing of any measures depended on making sure the UK was safe from new variants in future, adding: “Strong protections at the border are part of defending and safely allowing the domestic opening up.

“For those of us who want to see that domestic opening up, ensuring we have protection from variants that might arise overseas is an important part, until we can get to a position where we can be confident in vaccine efficacy against all variants not just against the current variants here in large numbers in the UK.”

Matt Hancock told the House of Commons today Brits will have to pay a whopping £1750 for the 10 day stay – which includes food, rooms and two extra tests.

The quarantine hotels policy is due to come in on Monday – after weeks of delays as ministers ironed out the details.

But nowhere near enough hotels are yet ready for the launch.

It’s estimated that nearly thousands of people a day are flying into the country from hotspot countries at the moment – meaning they will currently run out of space after just FOUR days.

Mr Hancock confirmed a significantly tougher policy for everyone flying into the UK to stop new variants coming in and putting at risk Britain’s vaccination programme.

He told the Commons: “Just like flu and all other viruses mutates over time. And so responding to new variants as soon as they arise is mission critical to protect ourselves for the long term.

“I make no apologies for the strength of these measures, because we’re dealing with one of the strongest threats to our public health that we’ve faced as a nation.”

People will be ordered to have a negative test before they fly, and then do two tests while they are in the hotel – on days two and eight.

Anyone who leaves the quarantine faces a whopping £10,000 fine.

And people who lie about where they have been on holiday to try and avoid the quarantine could even face a 10-year jail sentence too.

The new rules will apply to England only, but similar rules will come in in Scotland too.

The moves will be a nail in the coffin to the travel industry as Brits think about booking their summer holidays abroad.

READ  Brexit news latest: Labour and Government blame each other for lack of progress in cross-party talks

It will force the costs for going abroad up – as passengers will have to pay hundreds of pounds to stay in the hotel, and for the tests.

Paul Charles, chief executive of travel consultancy The PC Agency called on the government to propose an exit strategy so that the travel industry can plan for the future.

BANGED UP FROM ABROAD

‘WHERE IS THE BILL?’

He said: “The Government needs to signal that it is looking to loosen border restrictions again from April, when there will be much less pressure on the NHS and infection/mortality rates will be lower.

“What is the exit route out of this? Travel cannot work on the short-term whim of Government.”