A student was left fighting for life in a coma on his 21st birthday after being struck down with deadly meningitis.

Matthew Griffin, from Stourport-on-Severn, Worcestershire, woke up on October 14 feeling dreadful following a shift at a pub the night before.

Instead of attending his lecture at Worcester University, he tried to just sleep off an agonising migraine at his family home.

After violently vomiting up green bile, Mr Griffin went back to bed thinking he was either suffering from the flu or had food poisoning.

His parents Beverley, 51 and Mark, 62, found him lying unconscious on the kitchen floor just hours later.

He was rushed to hospital where he was diagnosed with potentially deadly bacterial meningitis, which can cause symptoms similar to a bad hangover.

Mr Griffin spent five days in a coma on life support before he came round and was told he had missed his 21st birthday. 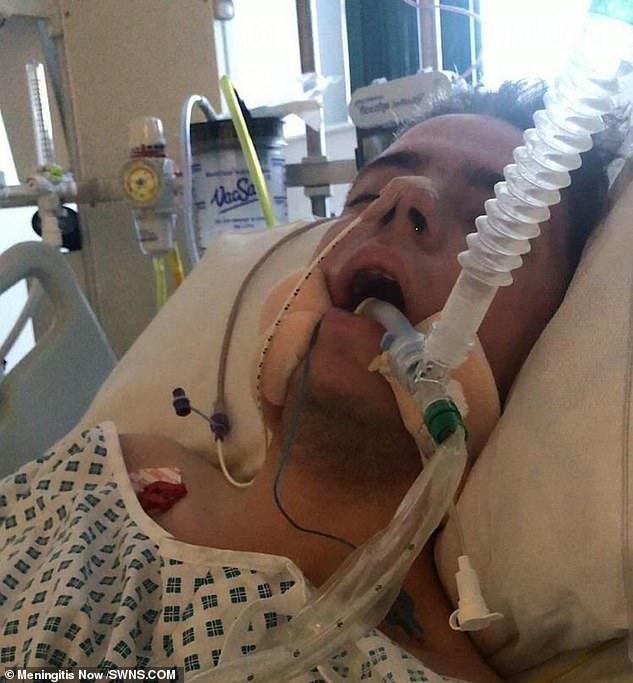 Matthew Griffin was left fighting for life on his 21st birthday after being struck down with deadly meningitis. He was in a coma for five days (pictured) 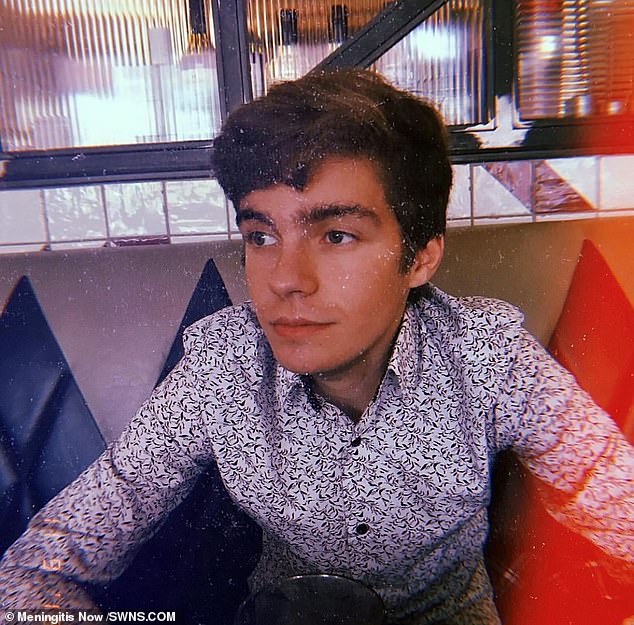 After violently vomiting green bile on October 13, Mr Griffin went back to bed thinking he was either suffering from the flu or had food poisoning

Bacterial meningitis is the most serious and life-threatening form of meningitis, and patients often get septicemia at the same time, which can lead to sepsis.

The hallmark symptoms of bacterial meningitis are a high fever, stiff neck and severe headache, similar to the flu.

Relieving his experience, Mr Griffin, who is working with the charity Meningitis Now, said: ‘Initially I felt ill the night before at work around 7:30.

‘I had eaten a carvery at work and soon after I felt very cold. I was losing energy as the shift went on, so I had to ask my manager to finish my shift earlier. I continued to feel cold and shivery yet I was boiling to the touch.

‘I started to feel dizzy and the lights in the kitchen were bright and I found them disorientating.’

He added: ‘On the night I was sick. I assumed I could have the flu or at worst food poisoning.’

The next day, Mr Griffin felt worse and was unable to go to university. He stayed at home while his parents went to a friend’s birthday meal.

He said: ‘I told my parents I’d be okay and I’d sleep it off. As the morning went on, I had an intense headache and my neck began to stiffen.

‘I’d never really experienced a migraine before and the pain was unbearable.

‘I then laid in bed with the covers up and blankets over me to keep warm and I got lots of wet flannels and put them on my head to try and relieve the pain.’

But moments later, things got worse for Mr Griffin, a film production and script writing student, when he rushed to the bathroom to vomit.

He said: ‘I’ve been sick before, from drinking too much on a night out or eating too much food, but I had never been sick like this before.

‘It was frightening. I was throwing up so hard my ribs were hurting and it was a dark green bile and I was dehydrating.’

Mr Griffin’s parents came back early from their event to a shocking sight.

‘My dad found me collapsed on the floor in our hallway, limp and unresponsive,’ Mr Griffin said. ‘My eyes were completely glazed over – bulging wide open.

‘My dad, being a nurse, was quick-thinking and called 999 immediately and the paramedics arrived to take me to Worcestershire Royal Hospital.’ 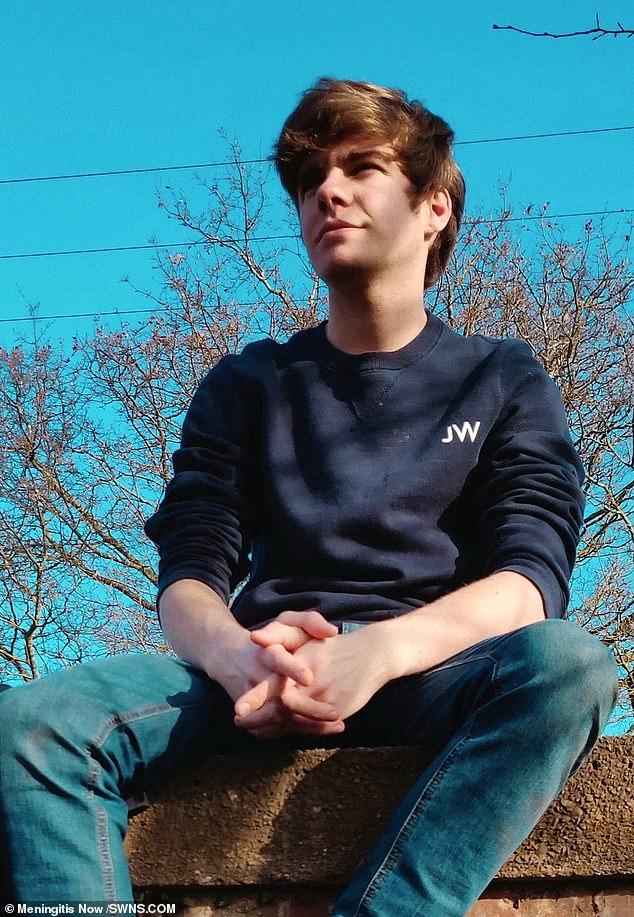 Mr Griffin, a film production and script writing student, was found lying unconscious by his parents Beverley, 51 and Mark, 62

Mr Griffin was taken straight to the intensive care unit where it was confirmed he was suffering with bacterial meningitis – the deadliest form.

He was put on life support and given antibiotics through a drip.

Mr Griffin, who recalls waking up in a dream-like state, said: ‘It was the most bizarre feeling: I was in a hospital bed with a couple of nurses looking at me.

‘I thought I was having a very vivid dream or some sort of hallucination. The consultant came and told me what had happened. That’s when the reality settled in.

WHAT ARE THE SYMPTOMS OF MENINGITIS?

The most common types of bacterial meningitis are meningococcal, pneumococcal, TB, group B streptococcal and E.coli.

Symptoms of meningitis include:

Someone with meningitis, septicaemia or meningococcal disease can get a lot worse very quickly.

‘I was very poorly and no matter how much I wanted to, I was not going anywhere. It was then I looked up at the clock to see the time and the date – October 18, three days after my 21st birthday.’

Mr Griffin is now doing well but admits recovery has been far from easy.

Those who survive bacterial meningitis are sometimes left with serious long-term problems, such as hearing or vision loss, problems concentrating and balance difficulties.

Mr Griffin said: ‘My dad shed a few tears because he was so happy that I could walk.

‘One day I just cried and cried, and that’s okay. It’s okay to have days where you feel emotional – after all meningitis is a very serious illness.’

Mr Griffin wants to warn others not to dismiss their symptoms, especially students who are at a high risk.

This group is advised to be careful because they mix closely with lots of new people – some of whom may unknowingly carry the meningococcal bacteria at the back of their noses and throats.

Older teenagers and university students are encouraged to get the MenACWY vaccine available to all those starting university.

The onset of bacterial meningitis symptoms are fast, within 24 hours. If allowed to progress, it can be fatal in one in ten cases.

Mr Griffin said: ‘So many young people are at risk of contracting this disease and are unaware of how serious it can be. The effects can be devastating.

‘I cannot thank the NHS staff enough for the care they gave me. They made sure I was safe and comfortable. I feel very lucky to be here in one piece.’

Although still recovering at home, Mr Griffin is positive for the future. He plans to return to university after Christmas and is hoping to begin training for the London Marathon in 2021.

He said: ‘The time that you spend at home getting stronger is not wasted. It gives you time to re-evaluate your life, what really matters and what do you want to do.

‘Meningitis is a terrible disease but having had it, I don’t think I would undo it if I could. It’s made me prioritise family time more and worry less.’

Spike in cardiac arrests at peak of pandemic as fear of virus kept Londoners away from hospitals, doctors reveal