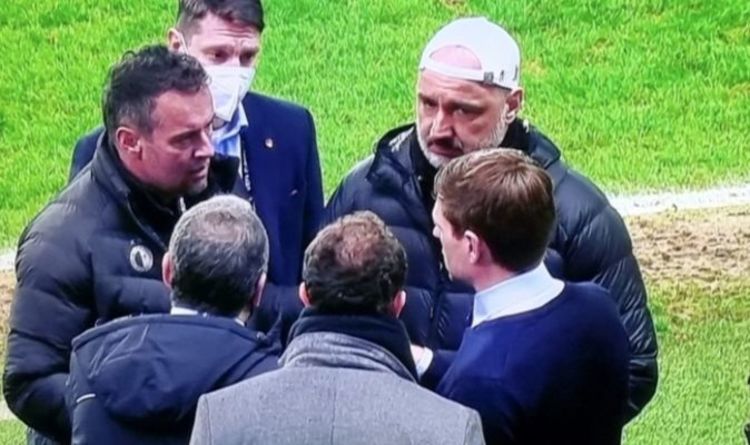 Steven Gerrard clashed with Slavia Prague technical staff during heated talks on the Ibrox touchline after their Europa League defeat to the Czech side, following an on-field incident involving Glen Kamara. The ‘Gers midfielder was allegedly the subject of a racist comment from Ondrej Kudela, who covered his mouth to make a remark towards Kamara late in the second half.

Slavia have yet to make comment about the incident, with Gerrard declaring that he will stand by his player.

The Liverpudlian was keen to get to the bottom of the incident after the final whistle as he consulted Slavia boss Jindrich Trpisovsky on the pitch.

He spoke to his opposite number briefly but the pair reappeared from the dressing room to discuss the matter in greater detail.

The Rangers boss was animated throughout the chat, pointing his figure at his counterpart, with other Slavia figures also in attendance.

BT Sport’s Darrell Currie claimed during the broadcast that they could hear shouting and several angry Rangers players tried to get back up the tunnel and onto the pitch.

Slavia’s Kudela found himself at the centre of the controversy during a break in play, with tensions running high as Rangers faced up to elimination.

The 33-year-old aggressively approached his opponent before covering his mouth and muttering something to the Rangers midfielder.

Immediately, Kamara and team-mate Bongani Zungu – who was in close proximity – reacted angrily, suggesting that something offensive was said.

According to BT Sport pundit Alan Hutton, Kamara then shouted “racist, racist” before Zungu approached the fourth official and said “you heard what he said!”

Unfortunately the game was overshadowed by the incident and although Gerrard congratulated his opponents at full-time, he was rightly concerned by the other events on the field.

He made a conscious effort to approach Slavia striker Peter Olayinka after completing several handshakes and talked to the opposition striker calmly.

Gerrard appeared to be explaining what happened in the incident involving his team-mate Kudela and Kamara. Slavia are yet to comment on the allegations.

Rangers will now focus their efforts on ensuring they finish the Scottish Premiership season unbeaten.

The hosts found themselves a goal down when Nigerian international Olayinka netted the opener inside 14 minutes.

Gerrard’s men were then left with a mountain to climb as Kemar Roofe saw red for a high boot on Slavia goalkeeper Ondrej Kolar.

It was reminiscent of the challenge that saw Sadio Mane sent off when he collided with Manchester City goalkeeper Ederson in September 2017.

The Czech later returned to the bench sporting an ice pack and evident damage to his face.

Leon Balogun was then given his marching orders after being shown a second yellow card.

Slavia then punished immediately and booked their place in the quarter-finals courtesy of a stunning free-kick from Nicolae Stanciu from 30 yards. 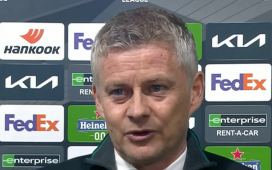 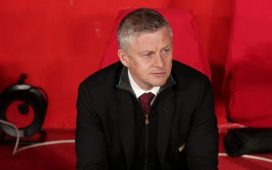