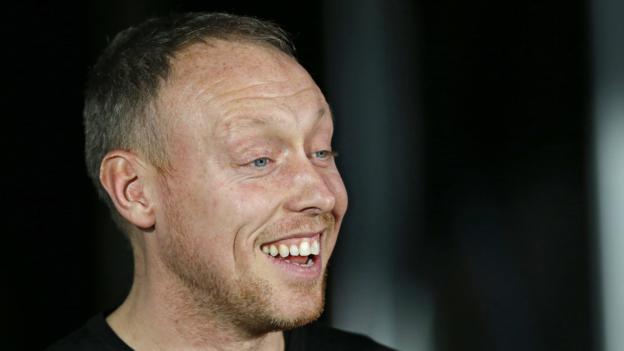 Steve Cooper had just said his farewells to Swansea City’s key men having been interviewed for their head coach job last summer.

Then Alan Curtis, the other Swansea legend on the interview panel, said exactly the same thing.

Thirteen months later, Cooper, 40, has done what Rodgers did by leading Swansea to the Championship play-offs in his first season at the club.

Not only that, but he has done so in more trying circumstances.

“Steve impressed us with his clarity of thought,” Birch says.

“He reminded Leon and Alan of Brendan when he came to Swansea.

“He is hugely organised, he has great empathy with people and he is very much a collaborative manager – there’s no real hierarchy.

“He has obviously been well taught at the Football Association in how you manage certain situations, and he has tactical nous as well.

Cooper’s road to Swansea began across south Wales in his hometown of Pontypridd.

The son of ex-Premier League referee Keith, the young Cooper was a promising full-back who joined Wrexham after a trial in the late 1990s but never made the first team at the Racecourse.

“His application and dedication were the things that stuck out, but the competition was fierce in his position.

“I think when he was about 20, he came to me and said ‘things are not going great, but I want to stay in football’.

“I said ‘coaching is the next course and you need to take your badges’. He was young, but that’s the best time to start.”

By the age of 27, Cooper had a pro licence, the highest coaching qualification available.

Having started out running Wrexham’s under-12s while playing his football in the League of Wales, Cooper ended up as the north Wales club’s head of youth before joining Liverpool’s academy in 2008.

“He kept progressing,” Flynn adds. “Word got round about this young coach at Wrexham and Liverpool took him.”

After five years at Anfield, where he worked with the likes of Raheem Sterling and Trent Alexander-Arnold, Cooper left for the Football Association.

There he helped nurture a string of young talents, and memorably won the 2017 Under-17 World Cup.

“One of the reasons he is here at Swansea is because he had worked with the best young players in England,” says Britton.

“We knew we would have a young squad and he had shown he knows what makes young players tick, and that he can improve them.

“The fact that we have been able to bring some of those players to Swansea just shows the contacts Steve has and how highly rated he is.”

Rhian Brewster was top scorer in England’s World Cup triumph and Cooper was key in the striker’s decision to join Swansea when Liverpool decided to send him on loan in January.

With 10 goals in 20 appearances, the 20-year-old has been a central figure in Swansea’s surge to the play-offs.

Two of his former England Under-17 team-mates, Conor Gallagher and Marc Guehi, have also played a part since arriving on loan from Chelsea.

Newcastle’s Freddie Woodman, who has been excellent in goal for Swansea this season, is another whose loan deal was a result of Cooper’s England connections.

Swansea have been forced into the loan market because of financial issues which are a legacy of their spell in the Premier League.

The only player Swansea have paid a transfer fee for since is Kristoffer Peterson, a £500,000 winger who has since left on loan.

The one man who is something of a luxury – in financial terms – in Cooper’s squad is Andre Ayew, who returned to Wales this season after a year on loan at Fenerbahce.

His Premier League salary is huge – and remains an issue for the club – but Ayew has delivered.

“Andre’s influence has been fantastic,” says Curtis. “But after losing Dan and Oli – I think Steve has done a remarkable job.

“He hasn’t been without his detractors and I think part of the problem is that we started the season so well.

“Expectations went through the roof and then when the level came down people were a bit critical, but you are always going to have down spells.

“When you consider everything – the number of players on loan, a young squad and injuries to Joe (Rodon) and Mike (van der Hoorn) – he comes out with a massive plus for the season.”

Curtis, who has worked with numerous managers during a lifetime as a Swan, has been impressed by Cooper the coach.

“The training is excellent – really sharp,” he adds.

“The players really enjoy it, just the same as they did with Brendan.”

Ayew, one of the few senior figures in the Swansea squad, has suggested Cooper will go on to be a “big manager” having been impressed by his work this season.

“I honestly think so too,” says ex-midfielder Britton, who stepped down as Swansea’s sporting director last month.

“We interviewed a lot of candidates last year, but when we met Steve we felt straightaway he was the one.

“He will have learned a lot from his first year and I can see him going from strength to strength. Hopefully that’s with Swansea.”

After an extraordinary final day of the regular season, Cooper’s side have the chance to emulate Rodgers’ class of 2011 once again by winning the play-offs.

They start as outsiders ahead of Sunday’s semi-final first leg against Brentford, who have twice beaten them comfortably this term.

But then Wednesday night’s events are a reminder that predictions and the Championship do not mix.

Swansea’s season looked over with 25 minutes to go at Reading, only for a flurry of late goals at the Madejski and the City Ground to send them into the top six.

“It was an amazing night,” adds Britton, a 2011 play-off winner under Rodgers.

“We know we have a very tough opponent in Brentford, but now it’s about which team deals with the pressure.

“Hopefully Steve can take us back to the Premier League.”