This simplistic animated feature produced by the Chinese streaming platform iQiyi centres on top-tier spy cat Vladimir (Kirk Thornton), who finds himself demoted to security detail and forced into a job share with a hacker rat named Hector (Dino Andrade). Hector is obsessed with a TV soap starring a glamorous, leggy bee. Radioactive material is stolen from their lab and so they must retrieve it by breaking into a hospital.

Teahouses and fire-breathing dragons hint at this Chinese-French co-production’s setting, but the action lacks a sense of place. There’s a dynamic, human edge to the skilfully drawn characters that is sadly missing from the inanimate dialogue, “humour” and voice work. The film’s well-meaning message about conserving endangered species is clumsily deployed too. “Our mission is to make sure all races survive,” assures an altruistic brown bear, fundamentally confusing race with species.

Iron Man VR Delayed “Until Further Notice” Due to Coronavirus 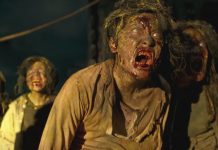 Poachers turned gamekeepers: when film critics get behind the camera