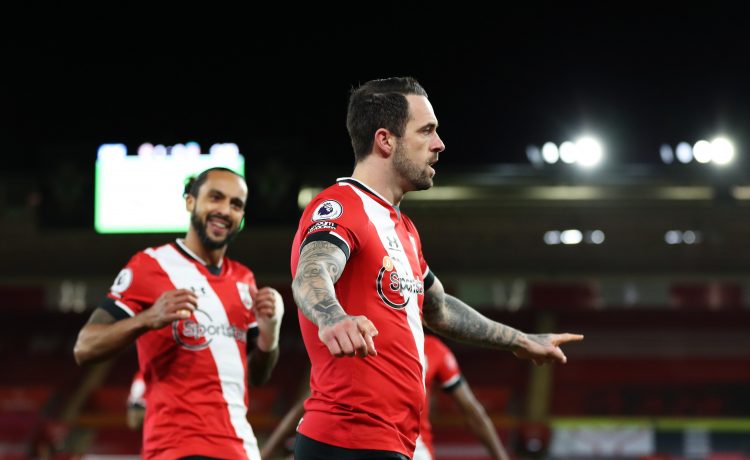 Liverpool are visiting Southampton this evening hoping to restore their three-point lead at the top of the Premier League table. There were wins this weekend for many of the chasing pack, with Tottenham, Manchester City and Leicester all closing the gap to the league leaders and Manchester United drawing level on 33 points, but Liverpool have the superior goal difference and can reassert their position with victory at St Mary’s.

Southampton have struggled for form in recent weeks and are without a win in their past four league games, a run which has seen Ralph Hasenhuttl’s side drop from second in the table to ninth. However, the return of Danny Ings to the starting line-up after injury has given Saints a boost and they will be hopeful he can inflict some damage on his former club tonight.

Follow all the latest updates from the Premier League meeting at St Mary’s below.

9 mins: Fraser Forster picks out Ryan Bertrand who plays the ball over the Liverpool back line. There’s bags of space there that Armstrong looks to make use off but the offside flag goes up before he gest into stride.

6 mins: That goal is Danny Ings’ 50th in the Premier League. A Liverpool throw in finds Roberto Firmino in the Saints’ penalty area and he hits a shot wide of the near post.

3 mins: Fantastic start for Southampton who get another bonus as Thiago picks up the first yellow card of the game for another rough challenge. Liverpool haven’t settled yet and they’re already a goal down.

2 mins: GOAL! James Ward-Prowse dinks the free kick over Liverpool’s high line and the bounce takes the ball past Alexander-Arnold. Danny Ings runs int behind the right-back, he meets the ball and chips it over Alisson to find the far side of the net.

Kick off: Southampton get the match underway with a long ball that comes straight to Trent Alexander-Arnold. The ball is played into the midfield and Thiago fouls Stuart Armstrong.

The teams make their way onto the pitch. Jordan Henderson leading out Liverpool. He’s starting at centre-half tonight, let’s see how it goes.

Danny Ings has been directly involved in a club-high 38 Premier League goals since Ralph Hasenhuttl became manager in December 2018, scoring 31 and setting up seven.

Liverpool have had only one shot on target in the second half of each of their last two Premier League games, and just six shots on target in total across those matches.