Two holidays, four new releases, and a few Oscar boosts made for a strong weekend. Though it fell behind last month’s stellar three days around Martin Luther King Day (which featured “Bad Boys for Life”), we saw an improvement of 25%, or $30 million, over the same dates last year. It’s another positive sign in a year that has seen all but one weekend improve on 2019: So far, total grosses are running about 15% ahead ($1.45 million) of last year’s anemic start.

Paramount’s “Sonic the Hedgehog” led the pack, and Valentine’s Day bolstered “The Photograph” (Universal) and “Downhill” (Searchlight). However, the Will Packer-produced romance fared far better than the Julia Louis-Dreyfuss and Will Farrell’s English-language remake of “Force Majeure.” And both will fall short of Blumhouse’s critically reviled, PG-13 horror take on the 1970s TV series “Fantasy Island” (Sony).

Post-Oscars, both “1917” (Universal) and Best Picture winner “Parasite” (Neon) also had an impact. The second weekend of “Birds of Prey” (Warner Bros.) and the ongoing “Bad Boys” also bolstered the overall figure.

Last summer, ”Pokemon Detective Pikachu” opened to $54 million and revived prospects for the tricky video game adaptation market. (That gross was a distant second-best to ”Lara Croft: Tomb Raider” in 2001, which grossed around $90 million adjusted.) “Pokemon” had the lure of Ryan Reynolds; “Sonic” at an estimated $57 million, features a rebounding Jim Carrey (co-lead with James Marsden) as well as a pre-holiday Sunday boost.

The pre-sold appeal of these adaptations is tricky. When the trailer dropped last April, the internet sounded the alarm over a creepy Sonic that had disturbing eyes and oddly human teeth. Paramount and its producers responded, even though it meant delaying release by three months, and it paid off: The A Cinemascore, along with its strong initial numbers, mark a major victory for Paramount. The film clearly is thriving as a family film, but it doesn’t hurt that many adults have fond memories of the game.

It is clearly a nice boost for Paramount. ”Rocketman,” its biggest domestic release last year, fell just short of $100 million. It’s their biggest opening since “Mission: Impossible — Fallout” in summer 2018, as well as their first #1 since then. That’s a long gap for a major studio. It won’t be nearly so long until they repeat.

Producer Will Packer successfully mined the romantic genre with stories focusing on black characters with “What Men Want” and “About Last Night,” both released around February 14. “The Photograph” is more serious in its portrayal of a journalist who falls in love with the daughter of his subject. It got positive reviews, but its 41% drop (it was #2 for Friday, #5 Saturday) doesn’t portend ongoing success.

The guessing was it would beat out Blumhouse’s “Fantasy Island,” another TV redo that wasn’t clamoring for rediscovery. As usual the producer kept the cost down ($7 million) and came up with a curveball to add interest. The show was about mostly middle-aged people who paid to live out their dreams. Here, the emphasis was on horror possibilities, with R-rated gore. Reviews were awful, and the Cinemascore a terrible C-, but it somehow survived (Saturday was off 24%). Not likely to be around long, but likely profitable for Sony (which owned the rights, hence the partnership with normally Universal-releasing Blumhouse).

As for “Downhill,” bad reviews doomed its chances for a slower rollout after its Sundance premiere. Julia Louis-Dreyfus and Will Ferrell suggested a general-audience appeal, but this English-language comedic remake of the Swedish “Force Majeure” fell flat with under $5 million for three days. The theme of a husband panicking in reaction to a life-threatening avalanche perhaps was a mite awkward for couples for this weekend. Despite 2,301 theaters, it managed to place only #10.

“Birds of Prey,” D.C. Comics’ “Suicide Squad” offshoot, approached the holiday weekend after a disappointing opening and confusion over its awkward title. Warner Bros. pushed “Harley Quinn” as the new moniker for marketing purposes, but the film dropped 48% — hardly disastrous, but it doesn’t suggest a long life. Margot Robbie’s R-rated adventure is nearing $60 million, with $100 million domestic less than certain. Worldwide, which dropped slightly less, is up to $143 million, with Japan the only top country yet to open. This will struggle to reach $250 million, an unimpressive number for a film that cost $90 million before marketing.

“Bad Boys for Life” (Sony) took #5, only down 6%. That’s amazing for the fifth weekend of a major hit that now looks like it will pass $225 million domestic. Sony also is seeing astounding steadiness for “Jumanji: The Next Level,” which at this late stage will actually be up 3%. For a while, it looked like it would end up around $300 million, down 25% from the 2017 reboot. Now figure it could reach $325 million.

The Oscars boosted the fortunes of two already stellar releases. “1917” dropped only 12% to add more than $8 million to its coffers, with $175 million domestic still possible. At $5.5 million, “Parasite” more than doubled its previous best weekend and achieved that gross despite parallel home availability, subtitles, more than four months of play, and less than full schedules on many of its theaters.

Sign Up: Stay on top of the latest breaking film and TV news! Sign up for our Email Newsletters here.

Sports video games to try during quarantine – The Badger Herald

2020 Video Games Are Filled With Remakes and Remasters – Screen Rant 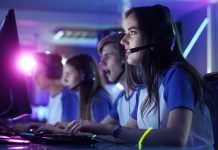 BEYOND LOCAL: Why are sports taken more seriously than online video games? – TimminsToday

BEYOND LOCAL: Why are sports taken more seriously than online video games? – ThoroldNews.com