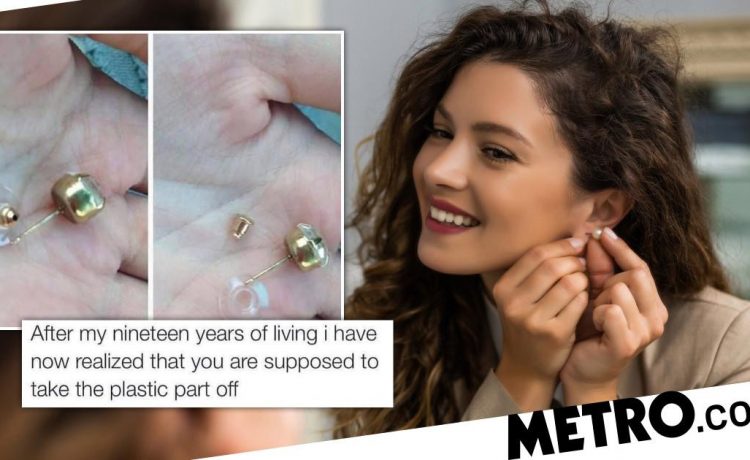 If you’re an earring wearer, you’ve probably noticed those little clear plastic bits on the back of your studs or hoops.

According to a social media post, we’ve been using them all wrong.

In the image, which has been shared widely on Facebook on various pages, we should remove the plastic bit to actually wear the jewellery.

Some were surprised that they’d never realised how easy it was to remove that piece.

‘Oh this makes sense, is that why my earrings always seem crooked?’ one woman commented.

Others said they’d realised when they accidentally snapped it off and thought it was broken.

Although it’s really down to personal preference, we asked some jewellery experts if it really is what you’re meant to do.

Jewellery historian Josie Goodbody, who is author of the Jemima Fox Jewellery Mysteries and creator of The Jewellerian podcast said: ‘Personally I find it much easier to keep them on – makes putting on and taking your earrings off simpler and makes the backs less likely to be lost. I have large lobes so it works for me but if you’ve none or tiny lobes, I wouldn’t.

‘More importantly, keeping the plastic bits helps distribute, across the ear, the weight of heavy pendant or chandelier earrings.’

Diamond expert Henry Pruwer, who creates bespoke pieces at his Hatton Garden studio in London, added: ‘There are so many different types and weights of earring, that there is no hard and fast rule about removing any plastic piece from earring backs. The heavier the earring, the more important the back is to counterbalance and keep the earring in place.

‘The plastic may be there to hold the earring straight and to make wearing the earring more comfortable. If you wear earrings often, particularly heavier earrings, then your ear piercing can become bigger over time, making it more difficult for the earring to stay perfectly in position.

‘Larger butterfly backs on earrings are sturdier and will often reduce the need for a plastic piece on an earring back. As a jeweller, I always make earring backs that suit the earring weight, avoiding any potential ‘droop’, and making plastic on earring backs unnecessary.


MORE : Five of the best jewellery buys for summer