Simon Cowell credits Connie Talbot for Britain’s Got Talent: The Champions as she returns with original song

Simon Cowell credited Connie Talbot for the existence of Britain’s Got Talent: The Champions as she returned to the infamous stage with an original song.

Connie rose to fame back in 2007, where she reached the final of the first-ever series of the ITV competition at the tender age of six. Yep, six.

Now 12 years later, the singer is making a comeback to compete against the likes of Stavros Flatley, Paul Potts and magician Ben Hart in a battle to become the ultimate act.

‘I don’t think we’d be sitting here now if it wasn’t for you,’ Simon told the now grown-up child prodigy in front of judges Amanda Holden, David Walliams and Alesha Dixon in the show’s upcoming first episode.

Connie, 18, released her debut album Over The Rainbow the same year as her BGT appearance, selling more than 250,000 copies on top of going to number one in three countries.

Her second album, which was recorded in her bedroom studio, was released a year later and features Christmas classics and modern tunes.

Last year, Connie made an appearance on Lorraine where she admitted she had high hopes of impressing Simon in her audition.

Reflecting on the moment, she said: ‘I’ll always remember saying when I was six that “I hope it’s a good show for Simon.” I absolutely loved Simon Cowell.’

The youngster also revealed that she’d kept in contact with Simon, adding:  ‘I still see him [Simon] every now and again – at charity events and stuff.’

Britain’s Got Talent: The Champions kicks off next week, but fans will have to try and avoid spoilers as the pre-recorded show’s winning act showed off their trophy and leaked the results.

Britain’s Got Talent: The Champions begins Saturday 31 August on ITV.

MORE: Simon Cowell makes plans for Britain’s Got Talent ‘Olympics’ with winners from around the world 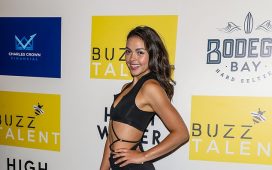