A sex pheromone named after Jane Austen’s Mr Darcy sends female mice crazy with lust and makes them sing at ultrasonic frequencies, a study has found.

Exposed to the special protein, dubbed ‘darcin’, in urine marks left by male mice, females displayed an immediate attraction and later began leaving their own markings.

Both this and the singing are signs of an increased sex drive in mice.

Discovered in 2010, the pheromone was named after Fitzwilliam Darcy, the aloof romantic hero who wins the affections of Elizabeth Bennet in ‘Pride and Prejudice’.

Experts have now uncovered how darcin takes hold in the brains of female mice — identifying the area of the brain which processes the pheromone’s signal. 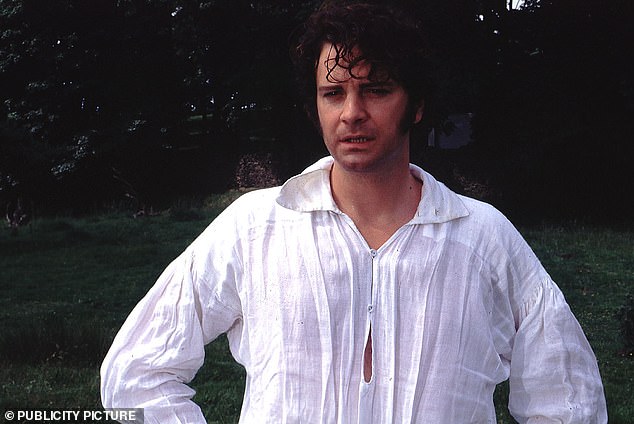 A sex pheromone named for Jane Austen’s Mr Darcy (pictured, as played by Colin Firth) sends female mice crazy with lust and makes the sing at ultrasonic frequencies, a study has found

In their study, neuroscientist Ebru Demir of Columbia University in the US and colleagues exposed female mice to darcin-scented urine — which is released by male mice to mark their territory and initiate courtship — and monitored their behaviour.

They found that nearly all of the female mice were immediately attracted to the darcin and, within 50 minutes, some of the mice began leaving their own urine-based scent markings.

In addition, some of the mice were observed to begin ‘singing’ at ultrasonic frequencies that are above the range of human hearing.

Both of these behaviours, the researchers noted, are indicators of increased sexual drive in mice.

Although the existence of pheromones in humans has not yet been proven, rodents and other animals are known to rely on the chemicals as a way to signal everything from potential dangers to the willingness to mate.

Pheromones like darcin are processed differently to normal odours, interacting with a second olfactory system that exists in animals like mice, but not humans.

‘The first nose works like ours: processing scents such as the stinky odour particles found in urine.’

‘But a second system — called the vomernasal nose, or the Jacobson’s organ — evolved specifically to perceive pheromones like darcin.’ 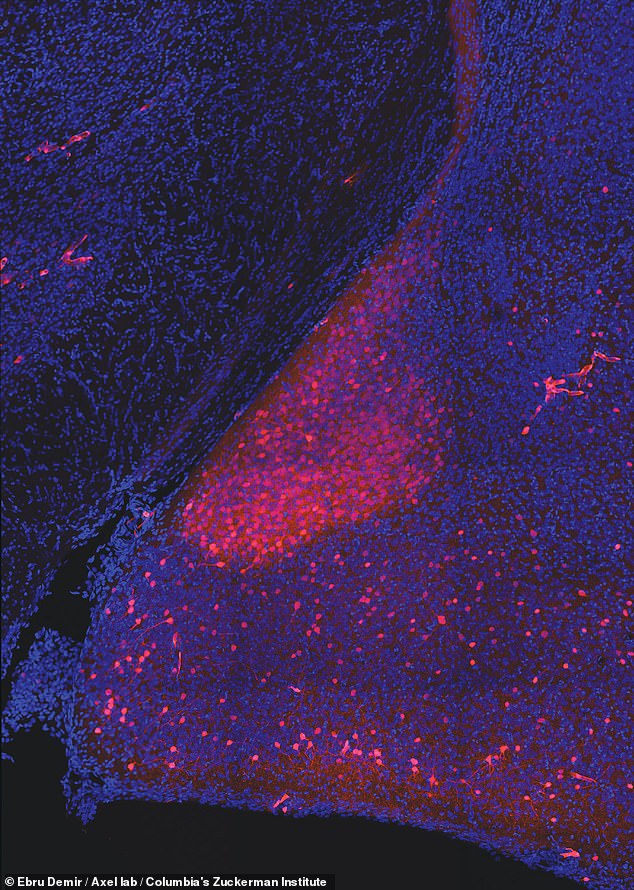 The team also found that a cluster of cells in one area of the mouse brain area, the medial amygdala, unifies this information from the outside world with the animal’s own internal state. Pictured, neurons in the medial amygdala. Those activated by darcin are seen in orange

The team also found that a cluster of cells in one area of the mouse brain area unifies this information from the outside world with the animal’s own internal state.

‘With today’s study, we’ve mapped the route that the pheromone darcin takes from the nose to the brain, bringing much-needed understanding to the mechanisms by which animals use scents to communicate.’ 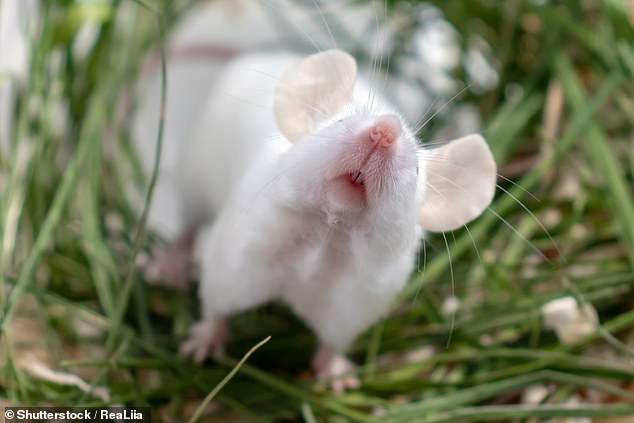 Exposed to the special protein, dubbed ‘darcin’, in urine marks, female mice displayed an immediate attraction and later began leaving their own markings

However, the team found that among the mice, lactating mothers — after an initial sniff of interest — largely ignored the darcin-laced scent marks.

The reason for this, they suggested, is rooted in a subset of brain cells called ‘nNOS neurons’ that are switched on in the presence of darcin.

‘By artificially activating those neurons, we could simulate the animals’ response to darcin and elicit the same behaviours,’ said Dr Demir.

‘When we silenced these neurons, the animal lost interest in darcin entirely.’

The team notes that the nNOS neurons are found in the so-called ‘medial amygdala’ of the mice’s brains — a region which is typically associated with emotional responses such as anger and fear.

When it comes to the darcin pheromone, however, the medial amygdala may play a different role.

‘Our results suggest that nNOS neurons in the medial amygdala do not simply pass along information about darcin,’ said Dr Demir.

‘These neurons seem to be integrating sensory information about the pheromone with the internal state of the animal, such as whether she is a lactating mother and therefore not interested in mating.’

With their initial study complete, the researchers are planning to look deeper into the neural circuitry involved in responding to pheromones — and how changes to that circuitry can drive behaviour.

They also hope to revise the way in which pheromones in general are defined.

‘Pheromones have long been associated with an innate, immediate behavioural response, but here we have shown that darcin can elicit complex behaviours that are dependent on the internal state of the animal,’ said Dr. Demir.

‘As we continue our investigations, it’s possible that other pheromones may also act on the brain in similarly unexpected and complex ways.’