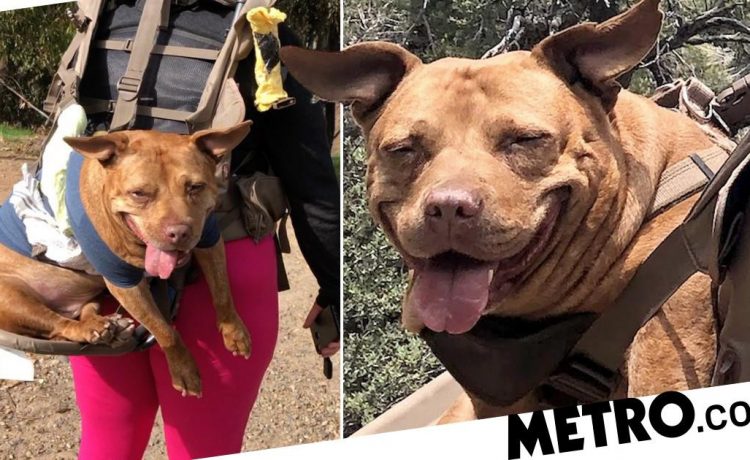 An adorable older dog cannot stop smiling now her owner has found a way to include her on hikes.

Previous leg surgeries and old age left pooch Hannah unable to go on walks. But owner Jamie, from San Diego, found an impressive way to safely fasten Hannah onto her back for outdoor adventures.

The 39-year-old veteran adopted the canine from an animal shelter back in 2016 and the pair have been inseparable since.

Sadly, Hannah – who is thought to be around 12-14 years old – can’t move around very much.

Jamie said: ‘Hannah is a very old dog. She has had two surgeries on her back leg and she has severe arthritis.

‘We can’t really go on walks anymore, she stumbles and her legs give out after a while. Her mind wants to do it, but her body just can’t.’

However, after buying a special camping backpack online, Jamie found a way to safely fasten Hannah onto her back for walkies.

And, if the pictures are anything to go by, she couldn’t be happier about it.

Jamie added: ‘I love going on hikes in the local national parks for a workout, but I realised Hannah would never be able to go with me or walk all the way.

‘I started looking online at backpacks for dogs, but they were all for tiny pups and not big dogs.

‘I was so frustrated. But then I found this backpack frame on Amazon, and it was perfect.

‘She took to it very quickly, she only likes sitting sideways though, never backwards.

‘She likes to be able to still see me, and I can grab her paw and pat her.  She loves just being included and you can see how happy she is on her face – she can’t stop smiling.’

Jamie says that just because Hannah is injured and old, shouldn’t mean that she can’t experience the world – especially considering how happy it makes her.

It’s safe to say Hannah’s huge smile is easy to fall in love with – and her beaming grin even gets noticed by strangers passing in the street.

‘She really is my best friend. No matter what we’re doing, she is always smiling,’ Jamie adds.

‘I’ve been out with her in public, and people have yelled out to me “is your dog smiling?”

‘I love that she has come into my life, and we have made each other so happy.’


MORE : Meet the dog who can play noughts & crosses and eat like a human


MORE : Woman dedicates her life to giving sick and disabled cats a loving home for their final days


MORE : Woman sleeps in bin bags as she doesn’t want to go to homeless shelter without her six dogs