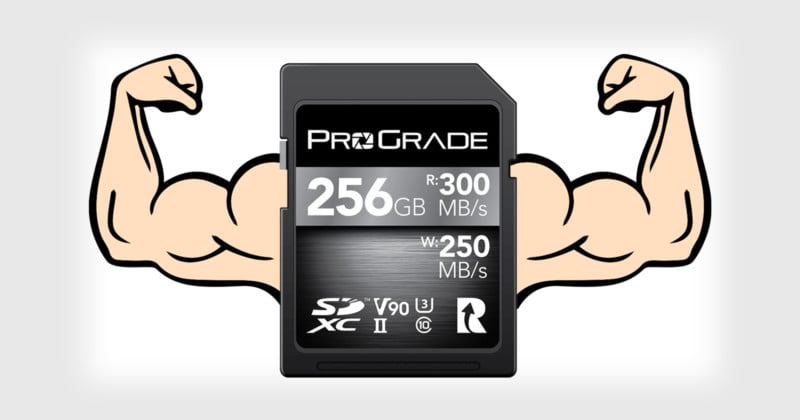 A few weeks ago, I wrote an article about Apple’s latest laptop and a wish list for things that weren’t included in its design. One of those things was a return to the built-in SD card reader.

Many readers were quick to tell me that SD cards are dying, or worse dead and on their way out. As such, putting an SD reader on the side of a state-of-the-art computer was a waste of time.

To see if this was really the case, I reached out to my friends at ProGrade Digital, a memory card manufacturer founded by the best and brightest minds from Lexar after Micron’s shuttering of their operations and eventual sale to Chinese company Longsys.

ProGrade works directly with all the major camera manufacturers to produce the products in demand for their devices as well as adhering to the standards put forth by the Compact Flash and SD Associations. If there’s anyone who really knows the current and future state of the SD format, it’s going to be Wes Brewer, CEO of ProGrade Digital, and Mark Lewis, their Vice President of Marketing.

It was Wes Brewer I spoke to years ago about the now-impending death of CFast and its eventual replacement: CFx. I went back to him and Lewis with the same topic in mind, but this time centered around the swirling rumors of the SD card’s demise.

“In general, camera manufacturers move slowly on abandoning card formats that they have invested engineering resources in over the years,” Lewis told me in an exclusive interview with PetaPixel. “We are seeing that change with the adoption of PCIe with NVMe-based cards like CFx. This is a big benefit to them and we are seeing the results of this with Canon’s introduction of a device from the DSLR division and a device from the Cinema division that both use CFx.”

But as beneficial as the new card format is, and it’s very beneficial due to its insane theoretical speed limit of 1 GB/s per lane of PCIe (CFx type B, which is the form factor that is shared with XQD, has two lanes), camera companies don’t just quickly jump from one format to another.

“We will see how quickly they really move to CFx across all of their cameras,” Lewis continued. “Also, even though it is a shrinking market, lower-end cameras will still have SD for a while since they won’t need the power of a CFx card.”

Even if SD cards are replaced in camera hardware, it’ll still be some time before the standard is completely replaced in market usability.

“When we launched the company in 2017/early 2018, we decided not to create a CF card since it was so old and not in many professional cameras,” Lewis explained. “We did, however, create a CF reader since there are so many legacy cameras out there that need a good CF reader and several manufacturers are still selling cards, even today.”

Lewis and Brewer believe that it’s easy to get caught up in the high-end, professional world where everyone believes that a majority of people upgrade their cameras every few years and forget about the larger group of people who shoot on the same cameras as long as they possibly can.

“I think that there will be a decent size market for SD for several years,” Lewis said.

Additionally, Brewer and Lewis don’t believe that the CFx type B card we’re seeing now is the actual eventual replacement for SD.

“One camera manufacturer is planning to go with the Type A CFx standard, which is a single lane PCIe.” Brewer said. “But it’s a brand new form factor that has never introduced into the market before. We see that as perhaps the ultimate replacement for SD over time.”

The number of years that SD has still left in its lifespan is likely to well exceed the time that the latest MacBook Pro will remain Apple’s most top-of-the-line offering. To say that support for SD should today be discarded is shortsighted, as the format still has several years left in widespread usage.

Cameras released in today’s market are still being made with SD card ports. Look at Panasonic’s S1H cinema camera, launched only a couple of months ago, for example. Eschewing even what Panasonic did with the S1 and S1R by putting in both a CFx/XQD port and an SD port, the S1H has dual SD ports.

“[CFx] Type A is not on the market yet,” Lewis reiterated. “When we start to see, for example, the Canon Rebel line with a CFx Type A card in it, that is the time to call for the death of SD!”

How I Made a DIY Gobo Holder for Studio Strobes

What Camera Sensor Size Equivalence is All About