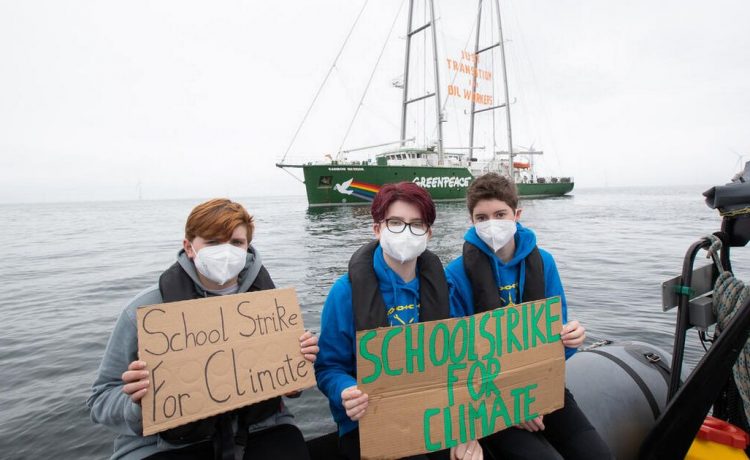 Youth climate strikers have staged a protest in the North Sea today at Scotland’s biggest offshore wind farm, calling for a just transition for oil workers.

Greenpeace UK is calling on the Scottish Government to take action to deliver a just transition for oil and gas workers, or risk abandoning a whole workforce, as was seen with coal miners and shipbuilders in years gone by.

Holly, who has been striking with Fridays For Future Scotland for three years, said: “The climate and ecological emergency is at its heart a social justice issue, so the solutions need to centre around the welfare and needs of people.

“Unless we move away from fossil fuels towards renewable energy, we don’t have a hope of stopping this crisis.

“The people in power need to start treating this like a crisis instead of tinkering around the edges without disrupting business as usual, which is ultimately what we need.”

Campaigners are urging ministers to engage directly with workers, remove hurdles to retraining and back up warm words with a proper specialist fund for energy workers.

“But instead, the Scottish Government is following Westminster’s playbook, and is complicit in propping up the destructive oil industry, while ignoring its key workers in the energy sector.

“This has to change – we urge Just Transition Minister Richard Lochhead to do his job, and listen to them.”

The Beatrice wind farm was built on the site of a former oil field, but has been controversial because key contracts were handed to firms overseas, rather than boosting Scotland’s economy and job opportunities.

Today’s protest is the latest stop on Greenpeace’s Just Transition Tour, in partnership with Friends of the Earth Scotland and Platform.

Greenpeace is taking a 13-metre wind turbine blade around Scottish cities, inviting people to sign it in support of a just transition for oil workers.

It has already amassed hundreds of signatures in Inverness, Aberdeen and Dundee, and MSPs Ariane Burgess, Mercedes Villalba, Joe FitzPatrick, and MP Chris Law are among those to have signed it.

More than 12,000 people have also signed an online petition calling on First Minister Nicola Sturgeon to side with Scottish workers and the climate, not oil bosses.

This comes after a Greenpeace survey of more than 300 Scottish offshore workers – with more than 600 UK respondents in total – revealed that workers face expensive, repetitive costs in the oil industry and if they want to access jobs in wind.

Nearly two thirds (64%) had been forced to repeat training qualifications they’d already done when changing to a new employer, and workers were spending an average of £1,627 per year on training costs.

An overwhelming 93% of workers surveyed were in favour of introducing standardised training – an ‘offshore passport’ – for working offshore, whether in oil, decommissioning or renewables.

Greenpeace’s next stop on the Just Transition Tour will be in Aberdeen on 24 July, where the campaign group will host a ‘town hall’ style meeting at Aberdeen Harbour.

The event will see politicians, union representatives and community leaders take part in a panel discussion about how to drive forward a just transition for the good of workers and for the climate.