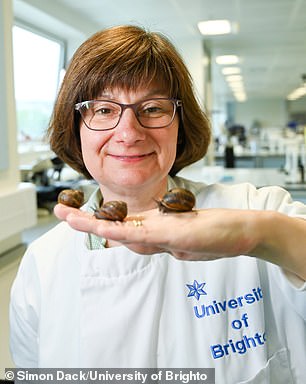 Dr Sarah Pitt has made a major breakthrough in the search for new antibiotics while studying snail slime. She is pictured in the lab at the University of Brighton in East Sussex

A scientist has made a breakthrough in the search for new antibiotics, after rowing with her biologist husband over his research into garden snails.

Dr Sarah Pitt identified antibacterial properties in the slime which could be used to treat a superbug called Pseudomonas aeruginosa.

The germ is resistant to strong antibiotics and can cause lung infections in patients with cystic fibrosis and infections in skin wounds.

Dr Pitt’s world-first findings follow huge speculation among the medical community that snails could be used in future antibiotics.

But the discovery was unexpected, and Dr Pitt had only started experimenting with the snails in rivalry with her husband.

Biologist Dr Alan Gunn was also testing snails to understand why snails don’t get sick despite their environments that are abundant in bacteria and rough surfaces.

Dr Pitt, a lecturer at the University of Brighton in East Sussex, said: ‘My husband is an invertebrate biologist and I am the microbiologist in the family and we played to our retrospective strengths.

‘He started testing the frothy mucus snails secrete as a defence against bacteria.

‘He thought something interesting might be happening but when I discussed his lab methods it was clear he was doing it all wrong. 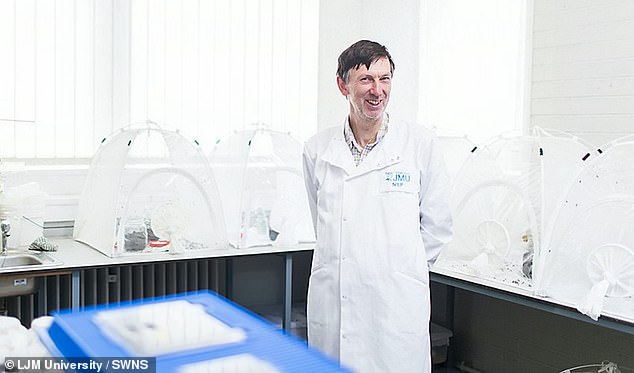 The discovery was unexpected because Dr Pitt had only started experimenting with the snails in rivalry with her husband, biologist Dr Alan Gunn (pictured) 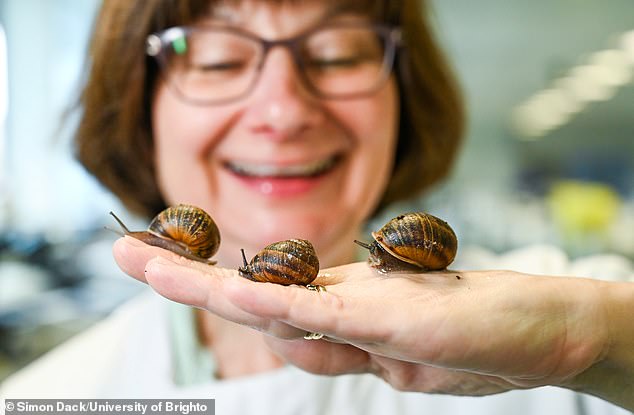 Properties in the garden snail’s slime could be used to treat lung infections in patients with cystic fibrosis and wounds, Dr Pitt said

‘So I did what wives tend to do and said “you are doing that all wrong – give it to me and I’ll sort it out” – which I did.

WHY DO SCIENTISTS THINK SNAILS HAVE ANTIMICROBIAL PROPERTIES?

Snail and slug slime has been used since ancient times for care and human health and it is still very important in traditional and folkloristic medicine.

In recent years, mucus from snail and slugs and its protein and components have been investigated for antibacterial, antiviral and antifungal properties due to extensive traditional uses.

Snail and slug mucus is a sticky elastic substance secreted by specific glands.

It allows the animals to firmly adhere themselves to many different surfaces, including rough terrain. The lubricant helps them to glide along surfaces. And the mucus also helps the creatures from drying out appearing unattractive food options for predators.

In a review of the evidence, scientists at the University of Pisa said research shows snail mucus has the ability to facilitate wound healing and to prevent its infections thanks to its many bioactive compounds.

Over the few last years, numerous studies on mucus composition have clarified many aspects of its properties, although much remains to be investigated on its antibacterial activity, according to the review published in the Journal of Complementaryand Integrative Medicine in 2018.

This hasn’t stopped the creation of snail creams and snail facials.

In 2013, Simply Divine salon in Corby, Northamptonshire started selling a snail facial for £50 after it was pioneered in Japan.

Facials involved having specially farmed creatures slither up and down your face, but it is not clear if this is still on offer.

‘So it was chance really. I don’t think either of us really expected anything much to come of it.’

Antibiotic resistance, in which common infections no longer respond to drugs, is a global threat, fueled by overuse and prescribing by GPs.

It is estimate to cause 23,000 deaths in the US per year according to The Centers for Disease Control and Prevention (CDC).

Scientists are therefore researching alternative therapies – including insects – but there is a serious lack of new drugs in the pipeline.

Dr Pitt tested snails she plucked from her own garden after the friendly debate, collecting the frothy mucus from the snails which she tested for antibacterial activity.

She found four novel proteins, at least three of which have antimicrobial properties, and two which were effective against a germ called Pseudomonas aeruginosa.

Ps. aeruginosa is an emerging cause of infections in healthcare settings and poses a significant threat to public health, according to the World Health Organization.

These bacteria are difficult to treat due to high levels of antibiotic resistance and are associated with a high death rate.

Dr Pitt said: ‘Pseudomonas aeruginosa is a very important cause of lung infections in patients with CF and strains which are resistant to the most commonly used antibiotic treatments are becoming increasingly common.

‘Therefore a new antibiotic would be useful.’

Working with academics at Kings College London, Dr Pitt separated the snail slime proteins, known as protein fractions, into smaller chunks in an attempt to identify the potential medicine.

She said: ‘We found that fractions containing some smaller proteins also worked against the bacteria – something we were not expecting at all, based on our previous results.’

READ  Cleaning up: the truth about living with nannies and cleaners

The microbiologist and her husband Dr Gunn, a professor at Liverpool John Moores University, teamed up to assess the proteins’ genetic code and discovered her findings were a world first.

She said: ‘Matching them with the international database of proteins, we found that no one had reported them before, so they are newly identified – by us.’

Other studies have found antimicrobial properties against different germs.

Dr Pitt is now working to make the proteins artificially in the lab and develop new treatments through her research.

She said: ‘If we can make the proteins artificially in the lab, we can try and work out what they are doing to the bacterium.

‘We think that it might be possible to incorporate the purified protein into a cream to treat deep burn wounds and possibly an aerosol to treat lung infections.

‘It has taken a long time to get this far – now we just want to know what is going on between the protein and the bacterium.’

Dr Pitt’s research was published in the British Journal of Biomedical Science.

Researchers have suspected that snail mucus contains antibacterial properties but their findings were inconclusive.

Several studies have been carried out on snail and slug mucus’ antimicrobial activity against other microorganisms, especially against multidrug resistant bacteria, such as MRSA.

There have been positive findings, but little has moved forward in the way of future application in medicine.

The pandemic could bridge generational divides, not widen them | Natasha Lennard