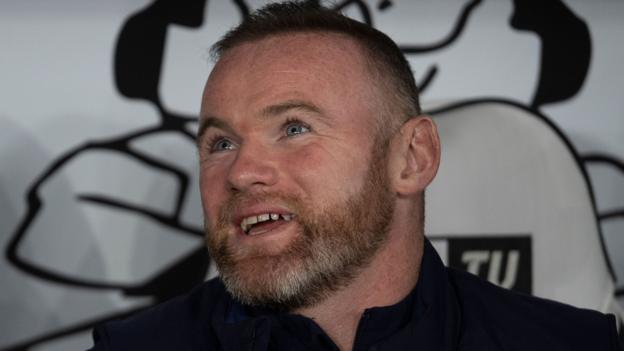 Wayne Rooney could start on his Derby County debut on Thursday when they host Championship strugglers Barnsley.

England’s all-time record goalscorer signed an 18-month player-coach deal with the Rams in August, but has been ineligible to play until January.

Derby’s poor form, coupled with suspensions, means manager Phillip Cocu could call on the 34-year-old from the start against the Tykes.

“He’s fit, he can start but he will need a few games,” said Cocu.

“So maybe not perfect from the start but it’s important he will get in the team as soon as possible so we get a certain shape in our team.

“If a player with the qualities, career and the experience of Rooney (is available) you have to be very happy and glad he is here, so I don’t need a suspension to consider him in the first XI, to be honest.

“Expectation will be high when he starts playing but we have to give him a few games to build up his minutes and get in the team.”

Midfielder Krystian Bielik, sent off in Monday’s 2-1 win against Charlton Athletic, and winger Tom Lawrence are both suspended.

It took the first two professional goals of 18-year-old Jason Knight’s career for Derby to earn victory against the Addicks.

And, with the availability of Jayden Bogle uncertain as the defender recovers from an eye infection, Rams boss Cocu readily admits that it is a “good moment” for Rooney to be available.

“We don’t have too many numbers are the moment, so to have a quality player like Rooney is more than welcome,” he told BBC Radio Derby.

Rooney started the decade with a Manchester United side that was challenging for the Premier League title.

He starts the next with a Rams side that are as close to the relegation zone in the second tier of English football as they are to the play-off places after 25 games.

When the former England captain signed for Derby in August, they had beaten Huddersfield Town away from home in what was the Terriers’ first Championship game since dropping out of the top flight.

Monday’s win against Charlton was their first victory in eight games.

Rooney, who won the Premier League five times, the Champions League, the FA Cup and three League Cups in a 13-year career with Manchester United, has been on the bench in his capacity as a coach for seven of those matches.

“There is going to be more bums on seats because of the Rooney factor against Barnsley, that is inevitable.

“Everyone wants to see Wayne Rooney in a Rams shirt – it is still surreal now. He is the leading scorer of England and Manchester United, his CV is endless.

“I’m really looking forward to it, just to see that bit of quality. You may lose a bit of pace here and there, but you don’t lose your vision and quality.

“It will be a great atmosphere on Thursday just to get a glimpse of him, I’m excited and I think the fans are the same.

“This result (win against Charlton) has just given everyone a little belief again because looking at the league table after the weekend it was a bit of a concern. And it still is because Derby need to go on and get back-to-back wins and go on a consistent run of results and performances.”

Barnsley are unbeaten in five games and boss Gerhard Struber, who is hoping to strengthen his squad in January, has no fresh injury problems to concern him.

He said he was surprised by Rooney’s move to a Championship club, and told BBC Radio Sheffield: “He’s a legend in England and also in the whole world when we speak about football.

“It’s a cool feeling to play against Wayne Rooney, but our focus and our concentration is on our game.”

Midfielder Alex Mowatt said he was looking forward to challenging himself against the best as the Tykes try to extricate themselves from the bottom three in the table.

“It’s a bit crazy really, playing against Wayne Rooney in the Championship. You can come up with all the plans in the world but hopefully he’ll have an off-day on his debut.

“Everyone is coming to watch him really, so the pressure is off us. We’ve got to try and spoil the party and try to win the game.”