By Ryan Smith for MailOnline

She began her trip to Italy with much gusto last week, when she hit the stage alongside Jess Glynne for a concert.

And Rita Ora was seen making the most of her breathtaking surroundings a few days later, when she boarded a yacht off the shores of Porto Cervo, Sardinia, to soak up the summer sunshine.

The Girls singer, 28, looked sensational as she stepped out in a skimpy black bikini, in which she proudly displayed her enviably tanned and toned physique. 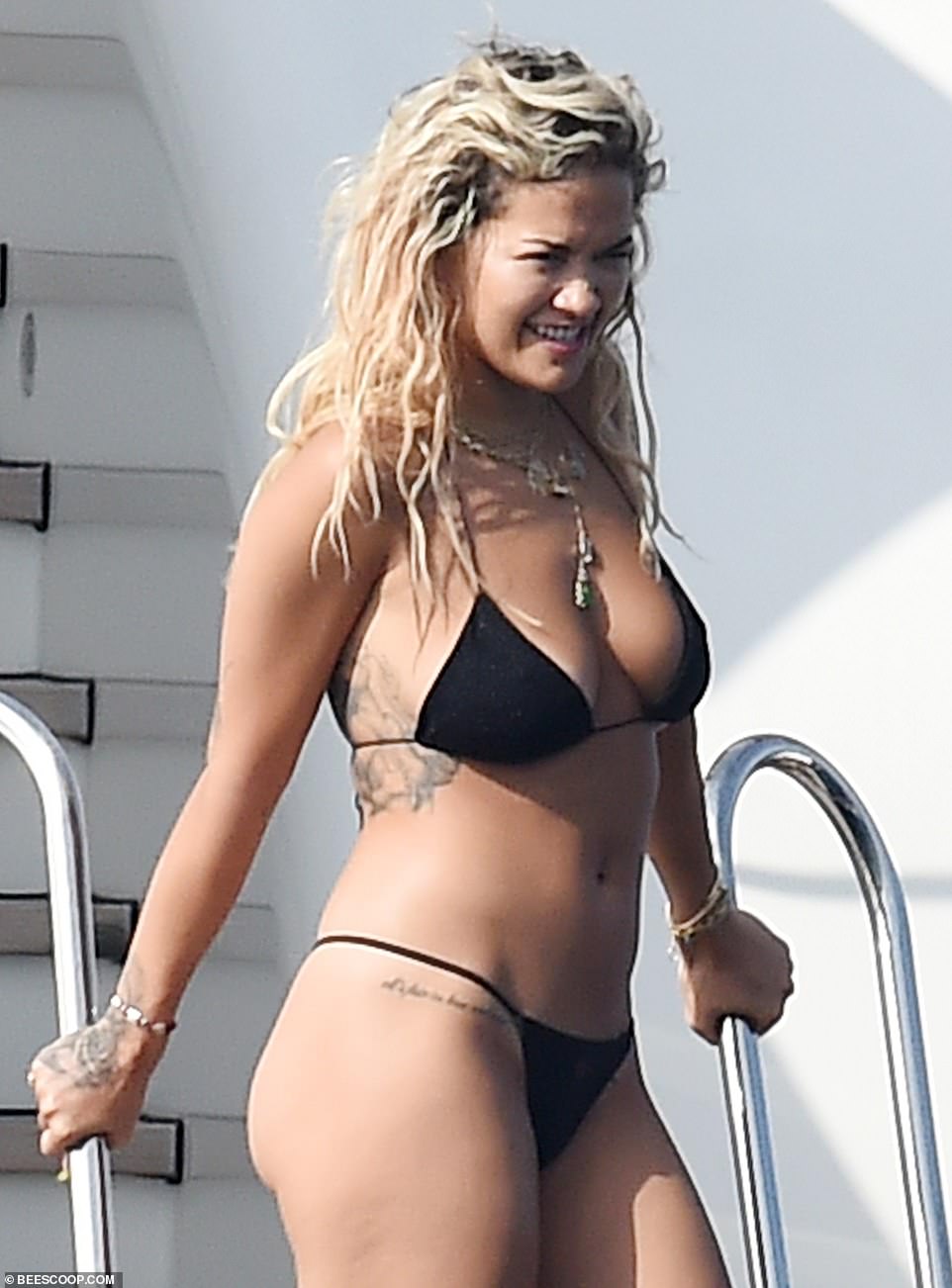 Soak up the sun: Rita Ora was seen soaking up the sunshine aboard a yacht off the shores of Porto Cervo, Sardinia, last week

The London-based beauty added a glitzy touch to her barely-there ensemble with a selection of bold jewellery that included a set of hunky chains and statement necklaces, bracelets and rings.

Wearing her bleach blonde tresses in beachy waves, the star went makeup-free for her casual day in the sun, which saw her zipping through the Mediterranean waters on a jet ski.

Last week, the glamorous singer looked sensational in a silver leotard, which was adorned with jewels and dramatic tassels, as she performed at a concert at the Hotel Cala Di Volpe in Porto Cervo. 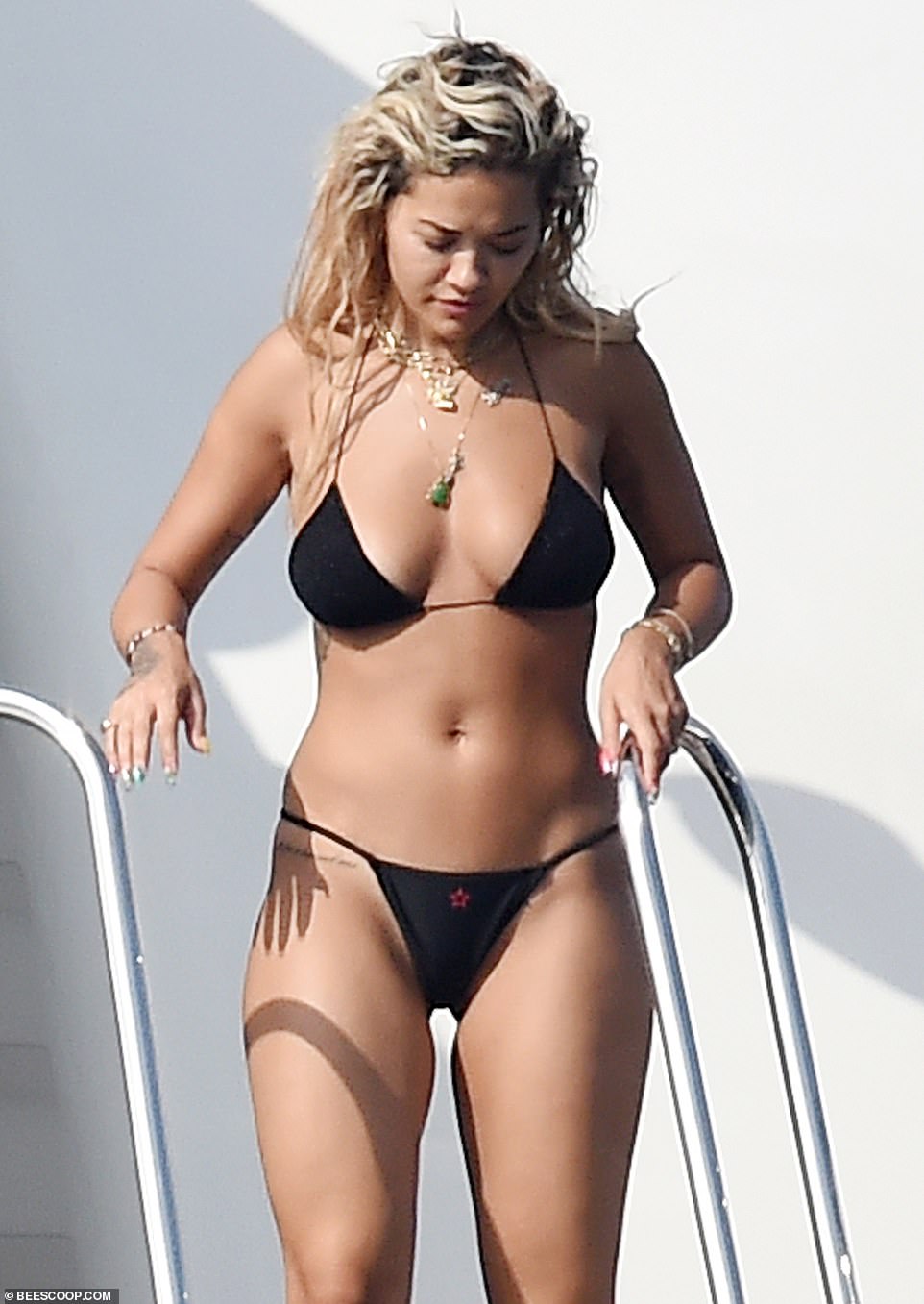 Tanned and toned: The Girls singer, 28, looked sensational as she stepped out in a skimpy black bikini, in which she proudly displayed her enviably tanned and toned physique 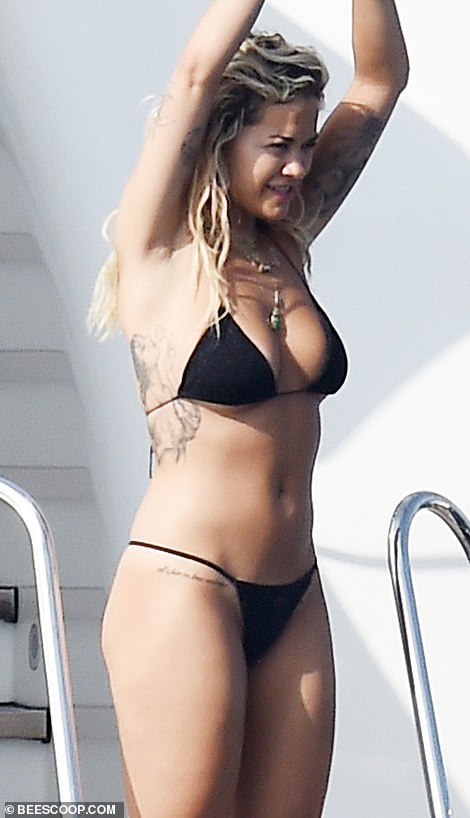 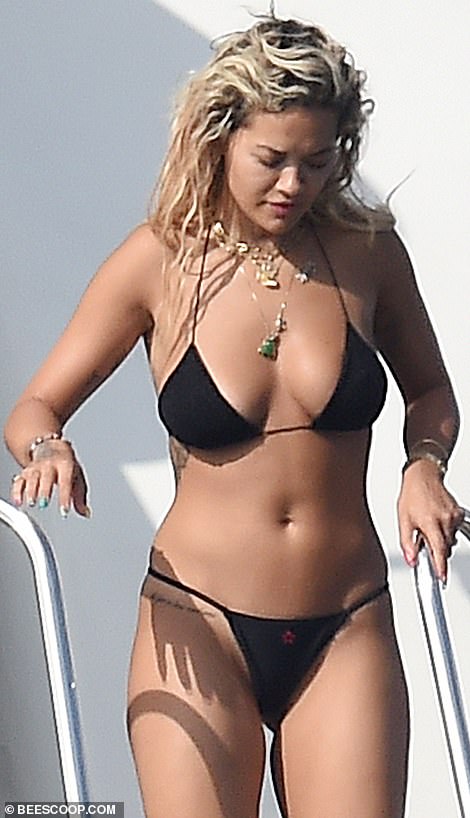 Golden girl: The London-based beauty added a glitzy touch to her barely-there ensemble with a selection of bold jewellery that included a set of hunky chains and statement necklaces, bracelets and rings 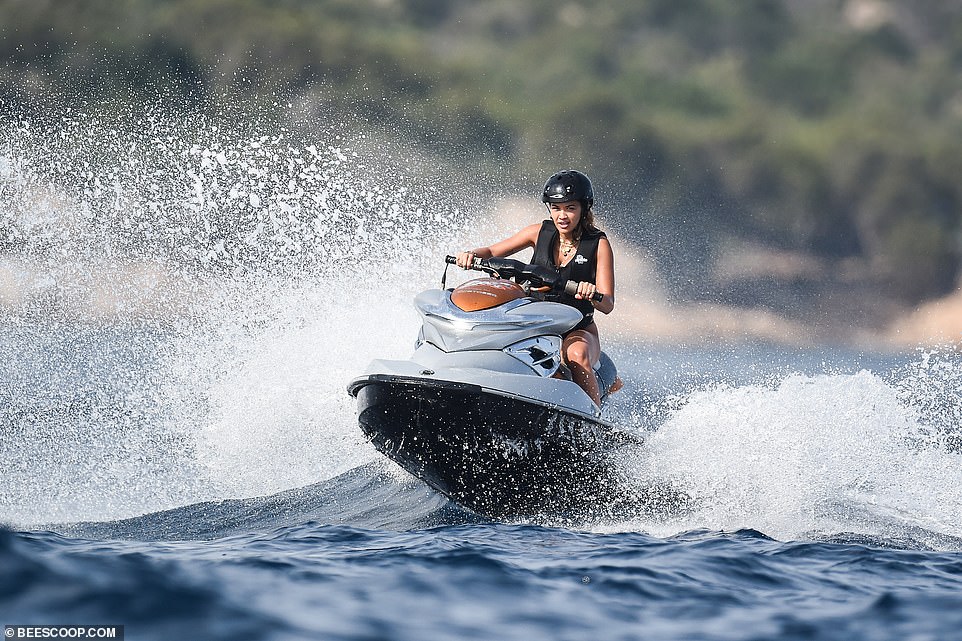 Jet ski: Not one to shy away from some physical activity, the star boarded a jet ski to zip through the Mediterranean waters 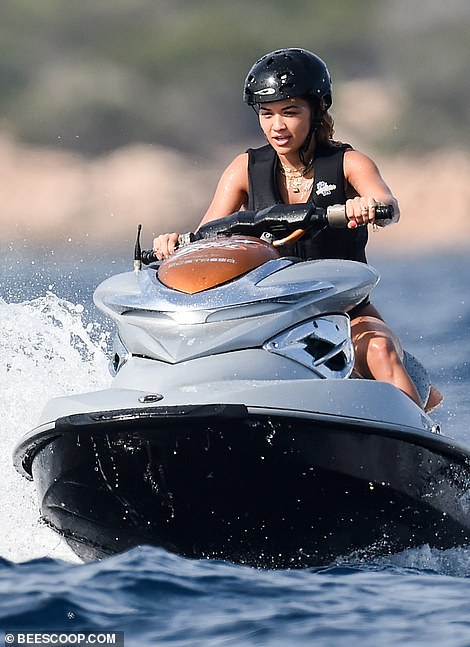 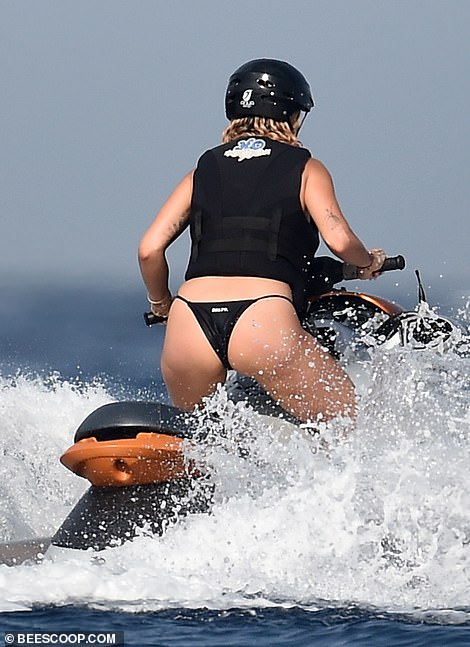 Stunning: The star was seen making the most of her breathtaking surroundings after performing at a concert there last week

The star completed her look with tights that were encrusted with jewels to match her ensemble, while she accessorised with chunky bracelets.

Prior to storming the stage, Rita bid farewell to Ibiza as she displayed her athletic physique in a stunning bikini snap.

She shared a photo of herself standing on a boat looking out at the sea while wearing a black bikini to mark the end of her Ibiza getaway.

Rita shared a host of snaps from her trip where she enjoyed the warm weather and said her stay was ‘so relaxing and just pure bliss’. 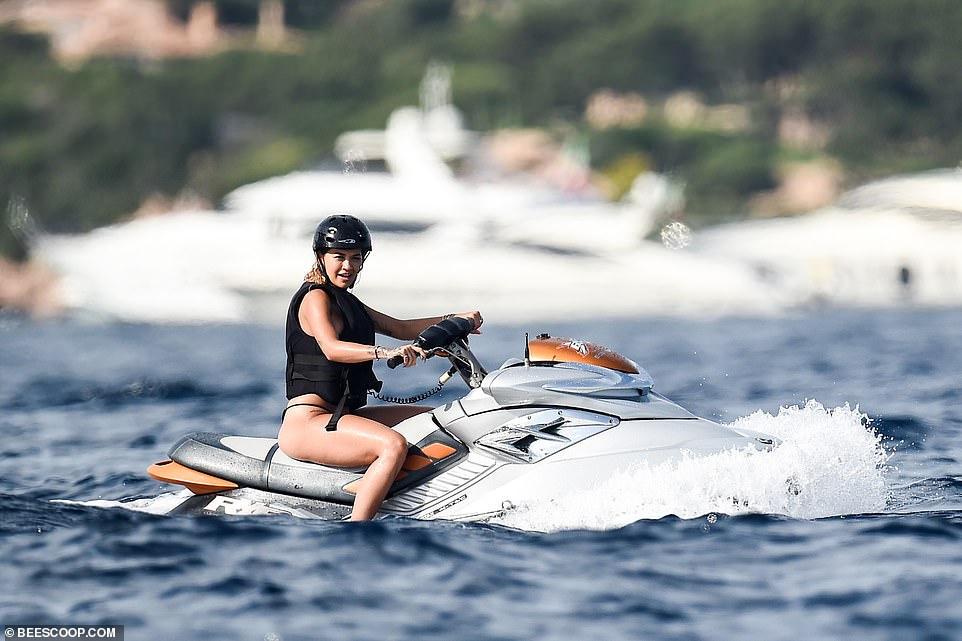 Much to be happy about: The stunning singer appeared to be in an upbeat mood as she enjoyed her luxury break on the shore 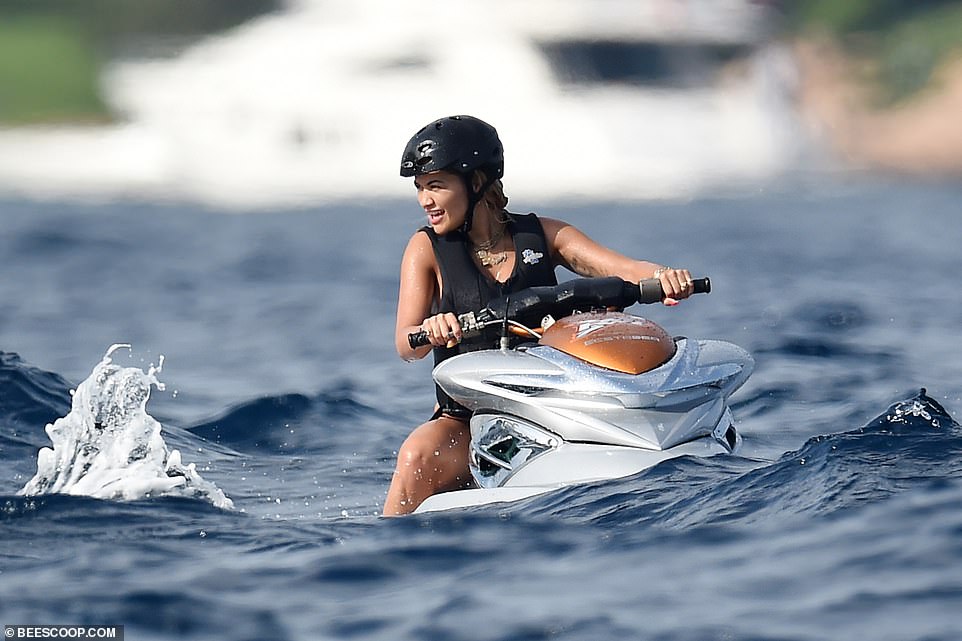 Tatt’s the way to do it: The Kosovo-born beauty displayed her numerous tattoos as she stepped out in her barely-these bikini 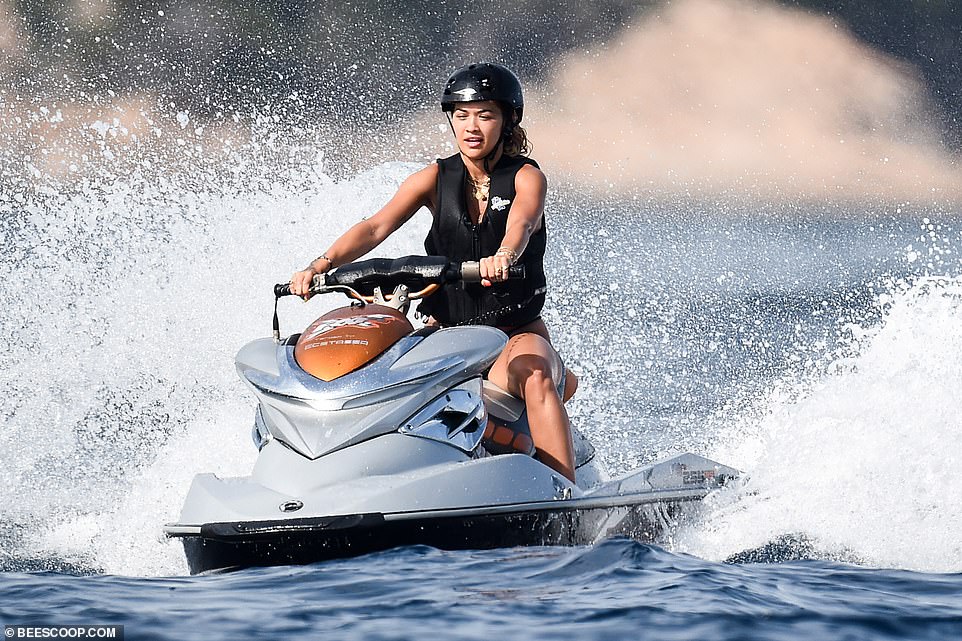 In her element: The singer appeared to be in her element as she splashed about in the waves during her fun-filled day out

The songstress recently confessed she ‘really relies on being a woman’ because she said females naturally exude sex appeal.

In discussion with Virgin Media Television’s Xposé, Rita explained she uses make-up and clothes to ensure she has a dramatic impact.

She said: ‘I think that as a woman we naturally use sex appeal and I feel like that just comes out of our pores whether we see it or not. We are just that kind of creature. 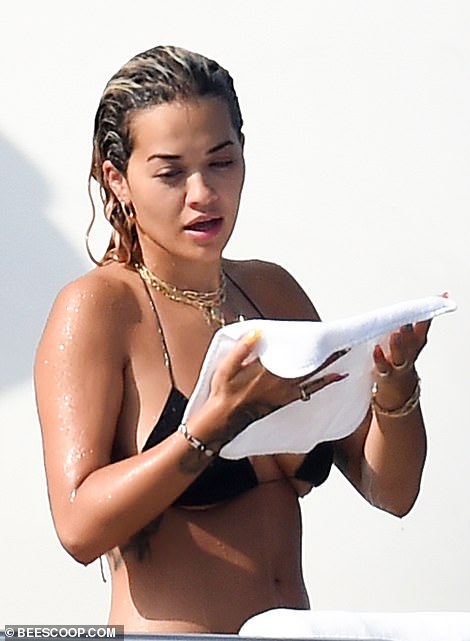 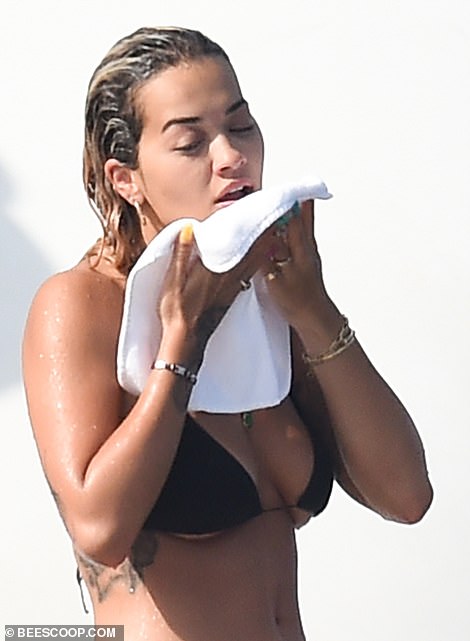 Back onboard: Following her session on the jet skis, Rita made her way back onboard the yacht, where she was seen drying off 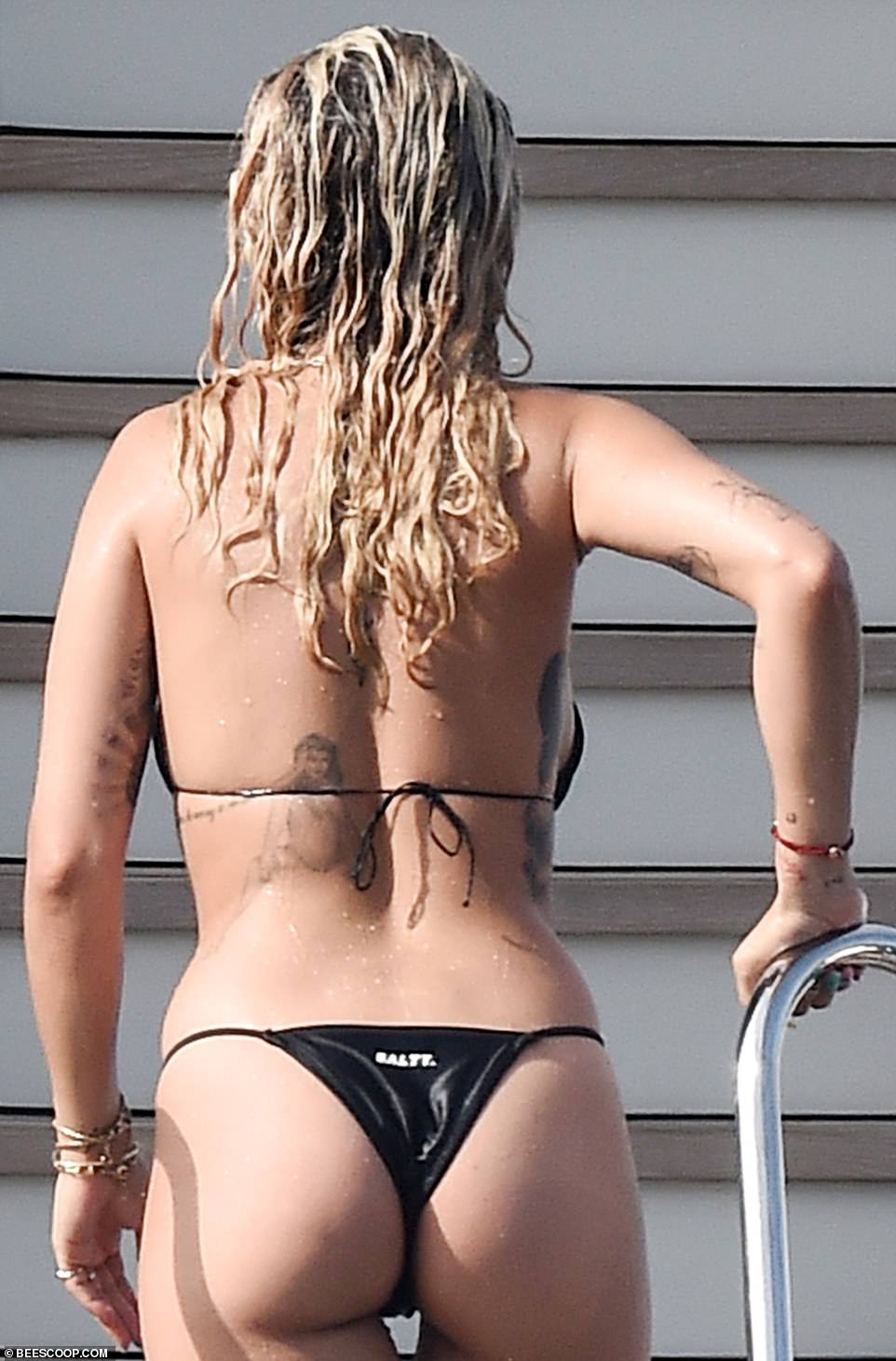 Making a statement? The world ‘salty’ was emblazoned across the back of the 30-year-old singing beauty’s bikini bottoms

Rita added: ‘I look at it like beauty and art. I envy the girls that can go out and not wear any make-up and feel comfortable and sexy.

‘For me I like making a dramatic impact, so I like to put on make-up and to decide how I want to feel that day.’ 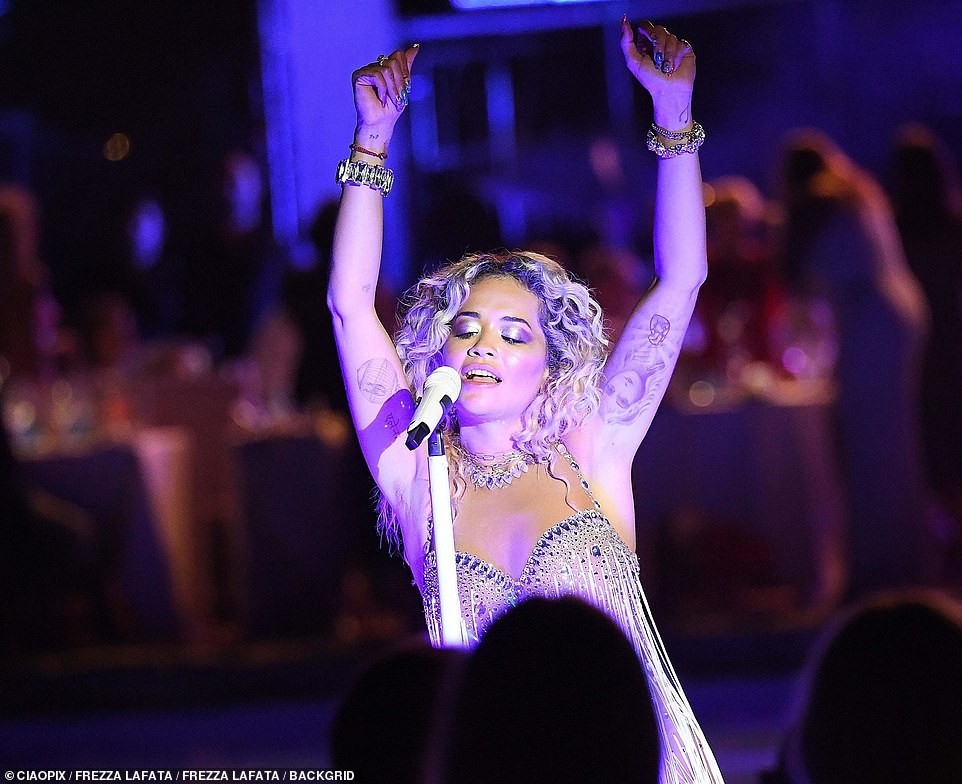 Putting on a show: Rita Ora put on an animated display as she hit the stage in a bejewelled silver leotard in Porto Cervo, Italy, on Monday

Stunning: Rita also took a boat from Ibiza to Formentera on the sunshine break

Lewis Capaldi sells out London O2 shows in one second 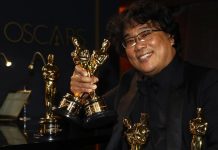