A joint project between Google scientists and researchers from Janella Research Campus in Virginia has created a high resolution 3D map of the fruit fly brain, the most detailed 3D model of a brain yet created.

The map captures around 25,000 of the fruit fly’s neurons and traces 20 million synapses connecting the different parts of the brain, including the olfactory, visual, higher order, and central complex regions.

While fruit flies have tiny brains, roughly the size of a poppy seed, they behave in ways that indicate substantial intelligence.

These behaviors include complex courtship dances and a tendency to investigate for hazards like toxic chemicals before choosing to move to new locations. 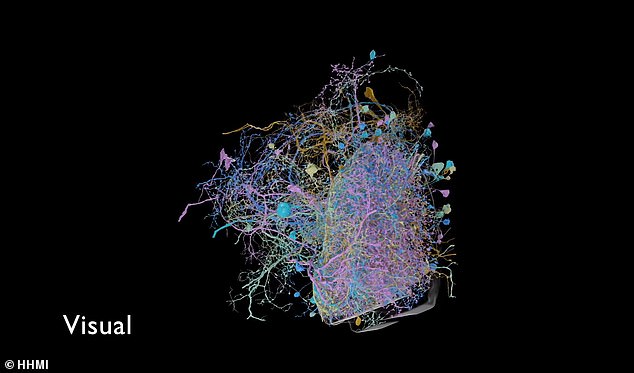 A joint project between scientists at Google and the Janella Research Institute created the most detailed 3D model of a fruit fly brain yet, using a voxel rendering tool

Researchers had previously created a computer model of the fruit fly brain by analyzing a series of microscopic images, but this is the first time a map has been built from real 3D data.

To accomplish this feat, researchers cut the fruit fly’s brain into thin, cross-sectional pieces around 20 microns thick, or a-third the width of a human hair.

They then bombarded the slices with streams of electrons and measured how the electrons moved as they collided with the surface of the brain slice.

That data was then translated into a 3D model using a voxel renderer.

Traditional graphics processing is built around 2D pixels, which can be arranged like points on a needlework cloth to simulate depth and perspective.

With voxel rendering, each individual pixel is the equivalent of a full 3D particle, less like a point and more like a small clump of clay, which can be precisely molded into accurate and highly detailed 3D shapes.

The team spent around two years analyzing the voxel data, or around 200,000 hours.

Much of that time was spent using virtual reality headsets to double check the accuracy of the neuronal pathways, a process the team dubbed ‘proofreading.’ 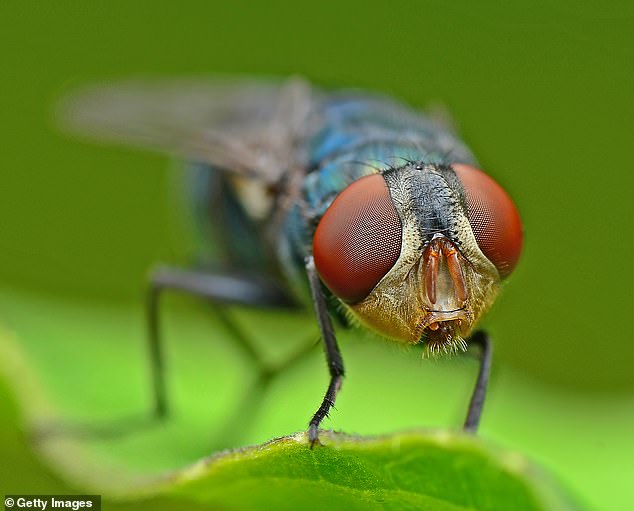 The fruit fly brain is roughly the size of a poppy seed, but it’s enough to give the small insect an appreciable amount of intelligence, including the ability to perform complex mating dances and to investigate their surroundings for potential hazards like toxic chemicals 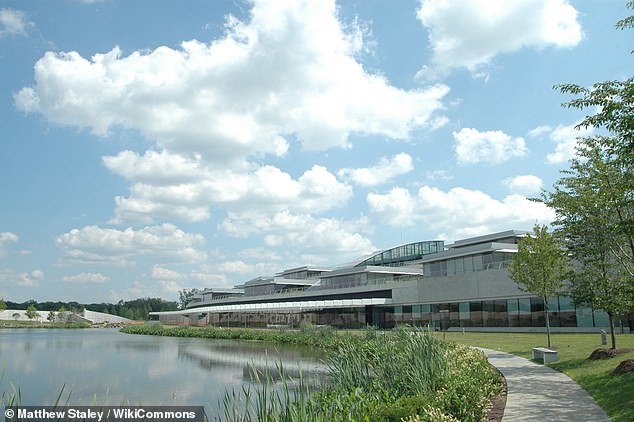 The Janella Research Campus in Virginia (pictured above) was home to much of the research,  which saw the team members spend over 200,000 hours preparing the map, with much of that time spent in virtual reality headsets verifying the accuracy of the neuronal pathways

While the finished 3D map is still just a quarter of the complete fruit fly brain, what researchers call a hemisphere, it is still the most detailed map of an intelligent life form’s brain yet.

Previously, that distinction was held by a map of the roundworm (Caenorhabditis elegans) brain, whose 300 neurons and 7,500 synapses were charted using a similar electron microscopy method.

Pixels are points in 2D space.

They can be used to simulate 3D images by drawing lines between different pixels arranged in a way that creates the illusion of depth.

Voxels are morel like 3D particles everyone of which has innate width, height, and  depth.

Sometimes they are compared to small particles of clay that can be shaped individually to create more detailed and accurate 3D models.

Voxels are sometimes used in video game development and can be seen in 2013’s Cube World, or the PlayStation game 3D Dot Game Heroes.

Some scientists have criticized the practice of brain mapping, called connectome, because it is time and resource intensive and doesn’t have any obvious or immediate applications.

‘The reconstruction is no doubt a technical marvel,’ Mark Humphries, a neuroscientist at the University of Nottingham, told The Verge.

‘It will not in itself answer pressing scientific questions; but it might throw up some interesting mysteries.’

For others, the ability to examine the brain’s mysteries in new detail will create a foundation for future breakthroughs.

‘The amount of time between a good technology being seeded, and doing actual science using that technology is often approximately 15 years,’ Joshua Vogelstein, of the Open Connectome Project, told The Verge.

‘Now it’s 15 years later and we can start doing science.’