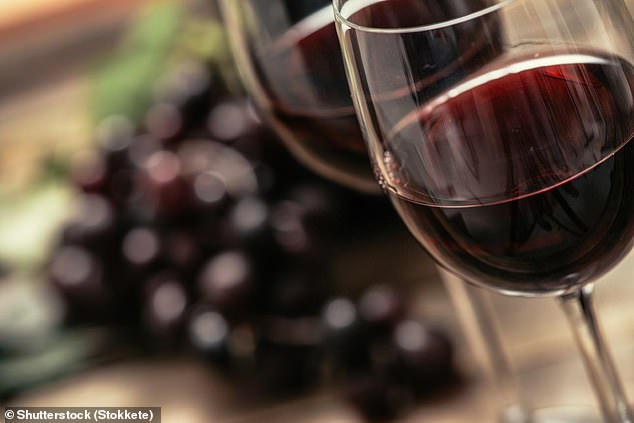 Red wine drinkers have a more diverse range of bacteria in their gut and therefore better digestive health than those who prefer other alcoholic drinks, a study found.

The research adds a point in favour of the drink in a long-running scientific tug of war over whether it’s good or bad for you.

Compounds in red wine called polyphenols may act as fuel for a range of health-giving bacteria and fungi living in the gut, the researchers suggested.

One of the scientists at King’s College London claimed: ‘If you must choose one alcoholic drink today, red wine is the one to pick.’

Past studies have produced confusing evidence over red wine, however, with some claiming it can lower the risk of heart disease or dementia and slow down cancer, and others finding the exact opposites.

Red wine has, on average, six or seven times as many antioxidants as white wine varieties, according to King’s College researchers (stock image)

They compared their results with other studies done on 1,104 people living in the Netherlands and 904 in the US.

People in the studies were asked about their diets and had levels of bacteria in their guts measured in the lab.

Those who drank red wine – even if it was only once every couple of weeks – had a ‘significantly higher’ diversity of bacteria in their digestive system, the study said.

Drinking white wine, however, led to only a ‘lesser but suggestive’ improvement, while spirits such as vodka or gin had no effects.

The scientists believe this is down to the polyphenols – antioxidant nutrients found in fruits – which are found in grapes used to make wine, particularly reds.

Red varieties, which include Merlot, Pinot Noir, Shiraz and Cabernet Sauvignon, have, on average, six to seven times more polyphenols than white wines.

‘This is one of the largest ever studies to explore the effects of red wine in the gut,’ said lead author of the study, Professor Tim Spector.

‘[It] provides insights that the high levels of polyphenols in the grape skin could be responsible for much of the controversial health benefits when used in moderation.’

The team suggested bacteria in the body may feed off the compounds found in the grapes.

Having a wide range of the bacteria helps the body to digest foods and create chemicals for absorbing energy from food, transporting oxygen, controlling cholesterol levels, reducing obesity, boosting liver function and protecting the heart. 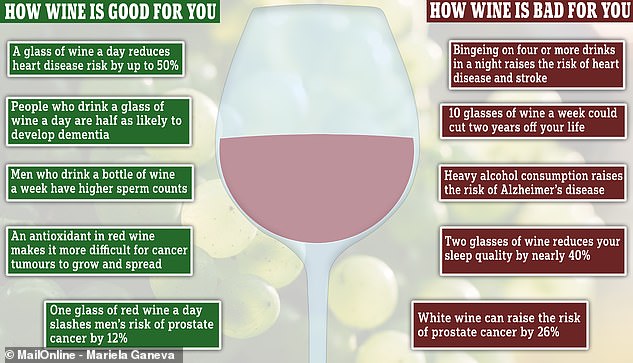 Studies published by scientists between April and October last year alone presented a confusing list of apparent benefits and risks of drinking wine, which sometimes make opposite claims about the same illnesses

Meanwhile, an imbalance of ‘good’ microbes compared to ‘bad’ can lead to a weakened immune system, weight gain or high cholesterol.

Having a higher number of different bacterial species is considered a marker of good gut health by scientists.

Study author Dr Caroline Le Roy added: ‘While we have long known of the unexplained benefits of red wine on heart health, this study shows that moderate red wine consumption is associated with greater diversity and a healthier gut microbiota that partly explain its long debated beneficial effects on health.

‘Drinking red wine rarely, such as once every two weeks, seems to be enough to observe an effect.

‘If you must choose one alcoholic drink today, red wine is the one to pick as it seems to potentially exert a beneficial effect on you and your gut microbes, which in turn may also help weight and risk of heart disease.

‘However, it is still advised to consume alcohol with moderation.’

Dr Le Roy and Professor Spector said their results stayed the same even when they took into account people’s ages, heights, weights and diets, but admitted a drawback was that people may not tell the truth about their drinking habits.

Professor Kim Barrett, from the University of California San Diego, was not involved with the study but said it was ‘very well-done’.

She said: ‘In the long run, this work might suggest (perhaps less pleasurable) ways to obtain the apparent health benefits of red wine consumption without drinking the wine itself, although more work would be needed to isolate and test the components of red wine that are responsible for the effects seen here.’

The team’s research was published in the journal Gastroenterology.

IS WINE GOOD OR BAD FOR YOU? HERE’S WHAT SCIENCE SAID IN 2018

HOW WINE IS GOOD FOR YOU

A study by University College London found women who drink a medium glass of wine a day are nearly 50 per cent less likely to develop heart disease than teetotallers.

And drinking little and often helps – women who drank moderate amounts inconsistently had an 18 per cent higher heart risk than those who had a drink every day or two.

The study of 35,132 women was published in the journal BMC Medicine.

Researchers at the Universite Paris-Saclay in France found middle-aged people who drink the equivalent of a medium glass of wine (175ml) a day are half as likely to develop dementia as those who don’t drink.

Their study of 9,000 people was published in the British Medical Journal.

Research by the Fondazione Policlinico in Milan found men who drink the equivalent of a bottle and a small glass of wine a week have higher sperm counts and ‘better quality semen’ than men who don’t drink.

The study of 323 men was published in the journal Andrology.

A study by the Federal University of Rio de Janeiro in Brazil found an antioxidant in red wine stops the formation of protein clumps which occur in 50 per cent of cancerous tumours and help the disease to grow and spread.

Their research, done on tumours in a lab, was published in the journal Oncotarget.

Scientists at the University of Vienna found drinking one glass of red wine a day reduces men’s risk of developing prostate cancer by around 12 per cent.

Their review of studies done on around 611,000 people was published in the journal Clinical Epidemiology.

HOW WINE IS BAD FOR YOU

Researchers at Vanderbilt University in Tennessee found bingeing on four or more drinks in a night raises a person’s blood pressure, blood sugar and cholesterol levels, which increase the chances of them suffering heart disease or stroke.

The study of 4,710 18 to 45-year-olds was published in the Journal of the American Heart Association.

Scientists at the University of Illinois found heavy drinking increases the risk of Alzheimer’s disease by reducing the brain’s ability to clean itself of toxic proteins which build up and kill off nerve cells in the organ.

The research, done on rats, was published in the Journal of Neuroinflammation.

Studies by Washington University and the University of Cambridge found a daily drink increases the risk of premature death by a fifth, and ten glasses of wine a week could cut two years off someone’s life.

The studies included records from more than a million people and were published in the journals Alcoholism: Clinical & Experimental Research, and The Lancet.

Researchers at the University of Jyväskylä in Finland found drinking two glasses of wine in one sitting can reduce the quality of sleep that night by almost 40 per cent, and even low alcohol intake damages sleep by around 10 per cent.

The study of 4,098 adults was published in the journal JMIR Mental Health.

Scientists at the University of Vienna found drinking moderate amounts of white wine, such as Chardonnay, raises men’s risk of getting prostate cancer by 26 per cent.

Their review of studies done on around 611,000 people was published in the journal Clinical Epidemiology.