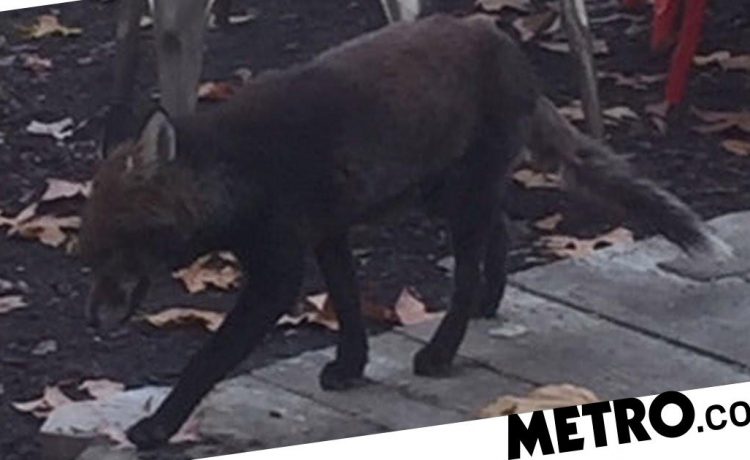 A rare black fox has been caught on camera prowling around a yard in south London.

Anthony White, 24, was helping sweep leaves out of a friend’s garden in Lambeth North when he spotted it shortly after lunchtime on November 27.

He said: ‘The first thing I thought is I’ve never seen a black fox before so I was in shock and quickly got my phone and captured footage of the animal.

‘I didn’t realise they existed until I saw that one.’

Black foxes are thought to be a North American type of red fox, with the added trait which changes their fur colour.

The fox is thought to be ‘melanistic’, which is the opposite of albino, and they make up about 0.1 per cent of the UK fox population.

Another black fox was spotted walking along a country lane earlier this week.

Karm Singh initially thought it was a stray dog until he got a little closer as traffic slowed to get a look at the animal.

It turned out to be a black fox which had escaped from Animal Farm Adventure Park in Berrow after an electric fence was damaged during a storm.

Mr Singh told ITV News: ‘It seemed quite comfortable just walking down the road slowly. The cars didn’t seem to scare it.

‘I was tempted to get out and take a photo, but I didn’t want to scare it.’