Questions over how London Bridge terrorist was freed to strike 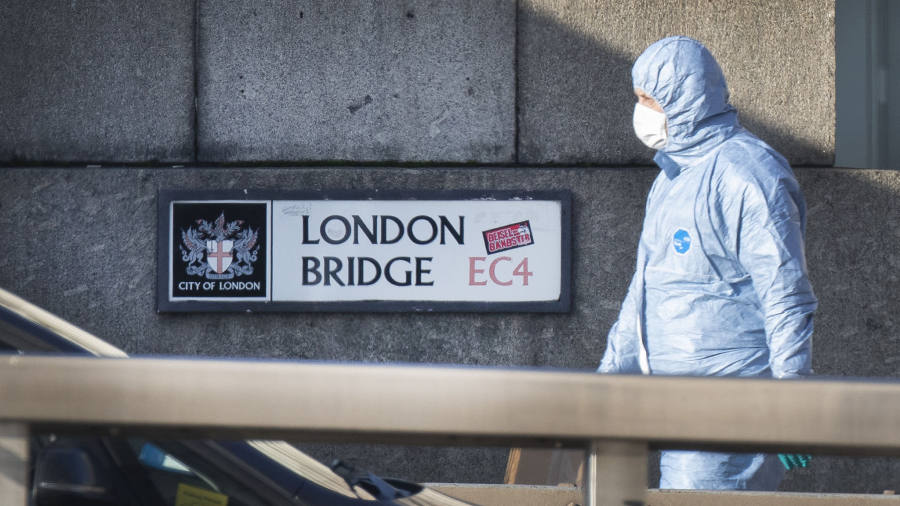 Investigators are working to establish how a man convicted of an Islamist terror plot was able to kill two people and injure three others in Friday’s attack in central London.

Usman Khan, 28, had been released from prison on licence in December 2018 and was wearing a monitoring tag. He was one of nine people convicted in 2012 of involvement in a plot inspired by al-Qaeda that included plans to plant a bomb at the London Stock Exchange and set up a terrorist training camp.

Questions on Saturday were centring on the circumstances of Khan’s release from prison, how well he had been monitored and why he was allowed to travel from his home in Stafford, in the West Midlands, to attend the Cambridge university-organised event where he began his attack.

Speaking on BBC Radio 4’s Today programme on Saturday, Brandon Lewis, the security minister, declined to answer specific questions about the handling of Khan, saying it was a “dynamic and fast-moving investigation”.

But he went on: “There are conditions that are put on people in this situation and one of the things police will be looking at is those conditions in terms of this investigation.”

Sadiq Khan, London’s mayor, a member of the opposition Labour party, said the police’s ability to combat terror had been hit by funding cuts. He also said he had opposed the decision to end Khan’s indeterminate jail sentence.

Khan was initially sentenced to an indeterminate sentence for public protection — a measure introduced by the Labour government in 2003. On appeal, he was instead sentenced to 16 years.

Mr Lewis told Today that funding for counter-terrorism police had been maintained amid police spending cuts. However, the mayor said other functions, such as community policing, were important in combating terror.

“Cuts have consequences,” he said.

When he identified Usman Khan as the attacker on Friday, Neil Basu, the Metropolitan Police head of counter-terrorism, said how Khan came to carry out the attack would be a key line of inquiry.

Khan had been attending an event organised by “Learning Together” — a group based at Cambridge university that brings together prisoners and higher education institutions — at Fishmongers’ Hall, a historic building in the City of London next to London Bridge, which was the scene of a deadly terror attack just five days before the June 2017 election.

Political party leaders suspended their campaigning efforts after the attack. A campaign visit by Mr Johnson has been cancelled, as has an “NHS summit” Labour leader Jeremy Corbyn was due to hold in Yorkshire. Boris Johnson is expected to attend the attack scene of the attack later. Labour said Mr Corbyn would resume campaigning on Saturday afternoon. The Liberal Democrats cancelled their Stop Brexit rally in London.

Mr Basu said the force believed Khan’s attack had begun inside Fishmongers’ Hall before he left the building and went on to the bridge, where he was detained and subsequently confronted and shot by armed police officers.

The Ministry of Justice, which oversees the National Probation Service, which was supervising Khan, on Saturday declined to comment on its handling of his case.

Pictures published on Saturday showed police at an address in Stafford, 120 miles from London. At the time of his conviction, Khan was described as being from Stoke-on-Trent, around 20 miles from Stafford.

The incident comes only weeks after the Home Office downgraded the UK’s terror threat level, which estimates the risk of a terror attack, from “severe” to “substantial”, the first such shift in five years.

Met commissioner Cressida Dick said there would be increased patrols by armed officers over the coming days.