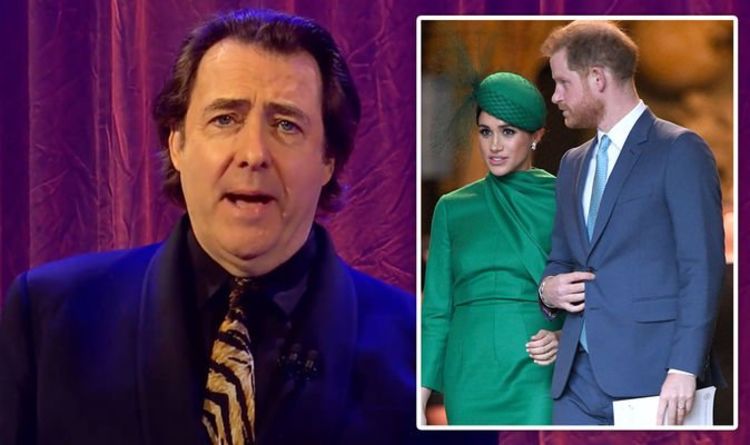 Presenter Jonathan Ross, 60, joked about Prince Harry, 36, and Meghan Markle, 39, stepping back from the Royal Family and their interview with Oprah Winfrey, 67, as he opened the socially-distanced award ceremony this evening. He began by welcoming viewers virtually to the Royal Television Society Programme Awards 2021, presenting in partnership with Audio Network.

“Yes, unlike some, the RTS is keeping its royal title,” he joked.

He went on to tell viewers the team pretended to be key workers to book a boardroom at the Grosvenor House for the ceremony.

“I signed in as a bin man and no one questioned it,” he added.

The presenter continued to poke fun at Chancellor Rishi Sunak and Gordon Ramsay.

READ MORE: Cliff Richard’s mother warned ex ‘don’t get too fond of him’

He added: “It’s absolutely right to go ahead with this awards show.

“Let’s face it, the television industry has kept us all going during lockdown, that’s why tonight, unlike Rishi Sunak, I will be giving everyone universal credit.

“Everyone except Gordon Ramsay’s bank balance, which may still have a bit of work to do.”

In a further swipe at Meghan and Harry, the chat show host continued: “TV has actually brought families back together, well apart from one glaring exception when TV has had the opposite effect.”

Jonathan’s references to the royals come after Meghan and Harry’s bombshell interview with Oprah Winfrey.

During their chat, Meghan and Harry discussed their life in the Royal Family from their point of view.

At first, the Duchess of Sussex was interviewed alone before she was joined by her spouse.

The former Suits actress said she felt suicidal during her time in the family and, at one point, feared to be left alone.

She added she approached members of staff for help, but claimed she was told she couldn’t receive any.

Meghan and Harry also said an unnamed family member expressed concerns about the colour of their son Archie’s skin.

When quizzed further by Oprah, Prince Harry said he will never reveal who it was who started such discussion.

It’s not the first time the couple have been at the centre of a joke this month.

He then pointed to the masked nominees, who were seated apart, and said there is “more tension in that tent than at a family reunion at Buckingham Palace”.

His joke came exactly a week after the Duke and Duchess of Sussex’s interview with Oprah aired in the US.