The news that the first two “Tony Hawk’s Pro Skater” video games were getting HD remasters has been one of the year’s best surprises. Now, fans of the franchise have more to look forward to. Upcoming documentary “Pretending I’m a Superman” chronicles the lasting influence of the classic skating game and how it affected Hawk’s career.

Here’s the documentary’s synopsis, per distributor Wood Entertainment: In 1999, the video game “Tony Hawk’s Pro Skater” shook the world when it sold 9 million copies upon release and forever changed the skateboarding scene. “Pretending I’m a Superman” tells the story behind the game that changed lives and shaped a generation.

“In the ‘90s everything about skateboarding was an ‘us versus them’ mentality,” Hawk says in the documentary’s trailer. “I was a fading vert skater, my income was getting cut in half every month, and so I started doing whatever I could.”

That “whatever” eventually led Hawk to meet with video game publisher Activision in the late ‘90s, when he signed a deal to serve as a face of the upcoming skateboarding game. The Neversoft-developed “Tony Hawk’s Pro Skater” became a major critical and commercial success and spawned a successful video game franchise.

The beginning of the documentary’s trailer is set to punk rock band Goldfinger’s “Superman,” a song that is inextricably tied to the skating video game franchise. Goldfinger vocalist John Feldmann will be among the documentary’s various interview subjects. The “Tony Hawk’s Pro Skater” games are as well-known for their iconic soundtracks as they are for actual skateboarding; the original game featured tracks from famed punk bands such as the Dead Kennedys, Suicidal Tendencies, and The Vandals.

Neversoft would go on to develop a handful of other successful games before being made defunct in 2014. The developer was responsible for the popular “Spider-Man” game on the original PlayStation and also developed a handful of successful titles in the “Guitar Hero” franchise during the rhythm music game craze of the mid-2000s.

Check out the trailer for “Pretending I’m a Superman” below:

Sign Up: Stay on top of the latest breaking film and TV news! Sign up for our Email Newsletters here.

Man who blamed video games for double killing in B.C. sentenced to 25 years without parole – The Globe and Mail 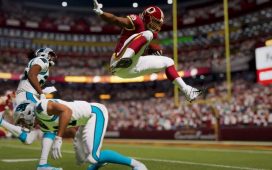