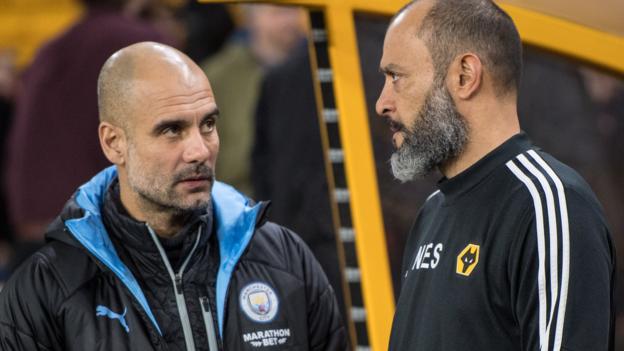 City host Sheffield United on Sunday less than 48 hours after losing 3-2 at Wolves.

Guardiola said “it is decided and we have to adapt”, but added “the managers and everybody agrees [it’s dangerous]”.

Wolves’ Nuno said: “All the managers and all the players are concerned.”

Wolves, who have completed the double over City this season, face runaway league leaders Liverpool on Sunday and Nuno said never before had he faced two tough teams “with 45 hours between games”.

City play the Blades on Sunday and then Everton on Wednesday, and Guardiola said: “My words are not going to change anything, it is the same every season.”

Wolves will play their 34th game of the season against Liverpool, having been involved in Europa League qualifying since July,

“For the moment it [the schedule] is absurd. There is no explanation, so all the decisions we make will be based on us. How are we to play football?

READ  Golf: Wiesberger wins Made in Denmark title by one shot

“It’s unbelievable,” said the Austrian, whose side beat Chelsea 2-0 on Boxing Day. “We couldn’t prepare anything for this game. I don’t know what this schedule is about.

“We had no sessions to work on anything. Why don’t we just play Thursday, Sunday, Wednesday?

“I know Saturday is a big day for football but it’s not necessary [to play again so soon].”

Guardiola not going to January sales?

Despite conceding the Premier League title race, Guardiola said there would be no new signings at the club in January.

Goalkeeper Ederson was shown a straight red card as the reigning champions played over 75 minutes with 10 men in the defeat at Molineux.

Guardiola said he will “have to evaluate the players” before making any changes for Sunday’s visit of Sheffield United to Etihad Stadium.

“Of course we have to put fresh legs because Sheffield United are so physical as well, but in these conditions, I don’t know,” said Guardiola.

“Honestly, I don’t know how they [the players] are going to recover and how they will feel. We will see.”