Premier League: How Man City & Liverpool could play off to decide title 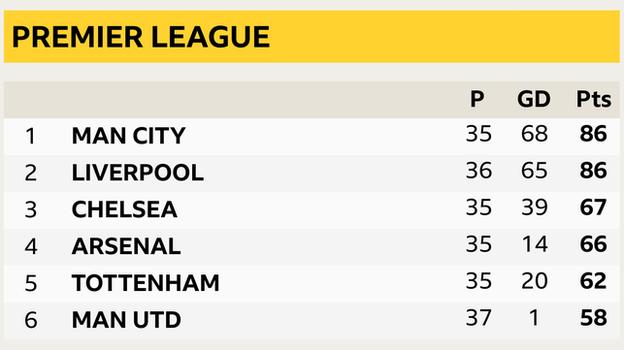 A play-off to determine the Premier League champions? Imagine the drama…

Manchester City know they will win the title again if they gain seven points from their last three matches – starting with a trip to Wolves on Wednesday (20:15 BST) – but the prospect of an unprecedented winner-takes-all decider isn’t as unlikely as it would first appear.

Premier League rules state that a 39th match will be used to determine the champions if two sides are level on points, goal difference, goals scored and in the head-to-head results between them.

The latter element has already been ticked off, with both games between the two ending 2-2. City know just one defeat would see Liverpool finish the campaign level on points with them should they win their remaining two matches – and City win their other two games.

All fairly plausible so far. On to the goals scenario.

If Liverpool do pick up three points more than City in their remaining games, goal difference would be the first factor to decide the title. City are three ahead on that count.

But should Liverpool peg that back – not inconceivable – it goes to goals scored and both teams have currently netted 89. Should that remain level between now and the end of the season, on to a play-off we go.

While the prospect of a straight shootout between the rivals would be a mouth-watering one for the neutral, it could also be a major headache for the league and for Liverpool’s Champions League final preparations.

No planning has been made as of yet for when it would be played or where but with international matches scheduled from 1 June, a date of 25 May – just three days before Liverpool’s Champions League final against Real Madrid – would appear most likely.