She is expecting her first child with husband Joshua Jackson and has mostly been keeping her pregnancy under wraps.

But in a rare post to social media on Friday night, Jodie Turner-Smith unveiled her burgenoning baby bump in a revealing outfit while posing backstage during a taping of The Graham Norton Show for BBC.

The actress and model, 33, looked incredible as she showed off her bare bump in a revealing all-black ensemble that paired together a cropped halter-neck top and caped trousers. 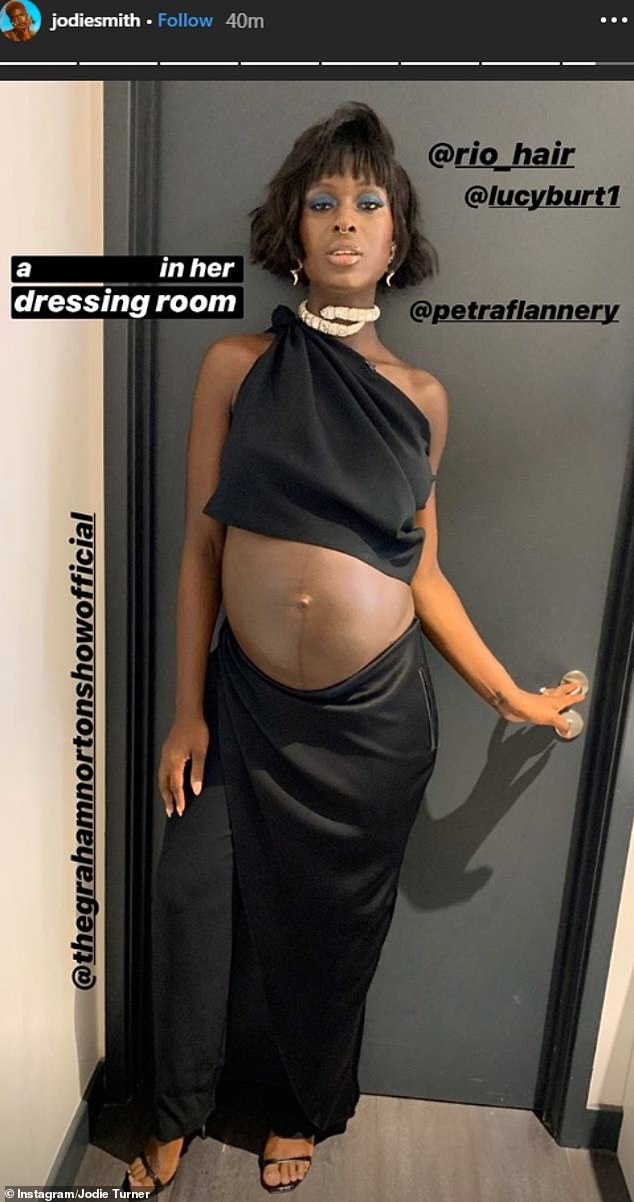 Beautiful: Pregnant Jodie Turner-Smith unveiled her burgenoning baby bump in a revealing outfit while posing backstage during a taping of The Graham Norton Show for BBC

Jodie oozed confidence in a pair of barely-there heels and a quirky choker necklace in the design of a snake.

She proudly showcased her pregnancy figure in an edgy outfit choice that included a rough-cut halter neck top that tied together in a knot on one shoulder and exposed her naked baby bump with its cropped hemline.

She paired her top with complementing trousers that featured a caped design on one side and wore her dark tresses in a bluntly chopped yet voluminous bob.

Jodie’s choice in beauty look made her outfit that more striking, as she favoured a bright blue hue to frame her eyes and a natural nude lip. 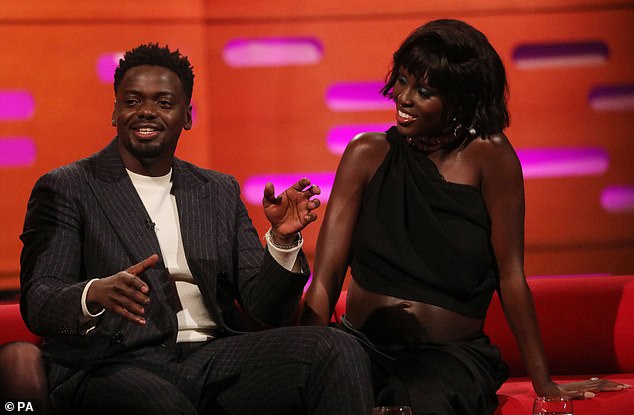 Making a statement: Jodie looked incredible as she joined her Queen & Slim co-star Daniel Kaluuya on the show to discuss their upcoming movie

She tagged her glam squad in her picture, along with The Graham Norton show, and added the caption: ‘A c**tress in her dressing room.’

Jodie appears on the BBC chat show on Friday night with her co-star Daniel Kaluuya as they promote their film Queen & Slim. Other guests include Margot Robbie, Jim Carrey and chart-topping singer Lewis Capaldi.

Queen & Slim was released in the U.S. in November last year had has widely received a warm welcome from critics across the board.

The film stars Jodie and Daniel as a young couple who go on the run after a traffic stop ends with the shooting of a racist cop.

It comes after Jodie and husband Joshua spoke about their future plans for their family and that they want to raise their baby outside of the U.S. 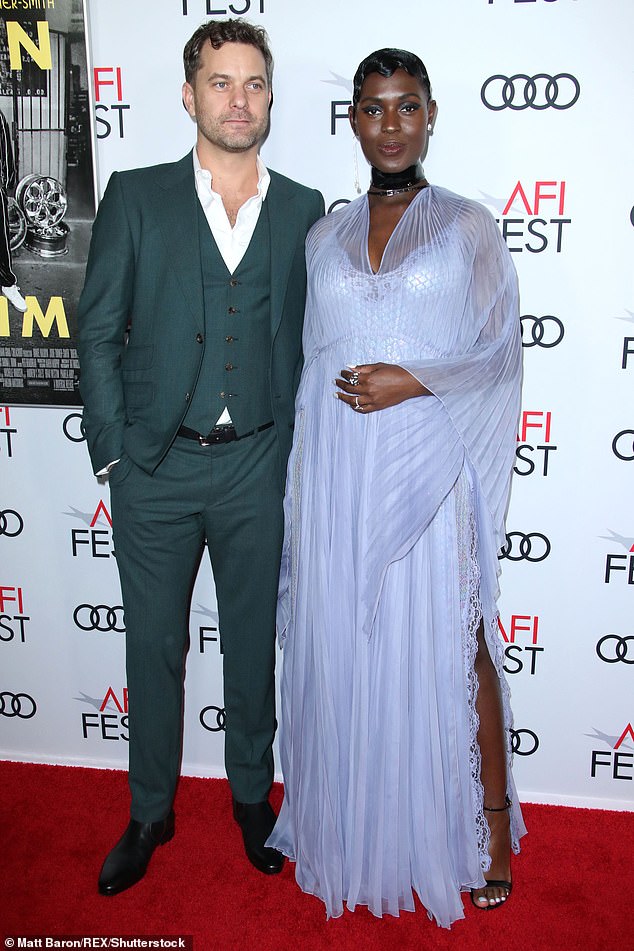 Parents-to-be: She and husband Joshua Jackson are expecting their first child together

In an interview with the Sunday Times, Jodie, who is seven months pregnant, said: ‘The racial dynamics over here are fraught. White supremacy is overt. It’s the reason I don’t want to raise my kids here’

‘I don’t want my kids to grow up doing active shooter drills at school,’ she added.

When asked where they’re considering as an alternative, Jodie quickly dismissed her native UK.

‘England has gone off the rails,’ she said, ‘so I was thinking maybe Canada.’ 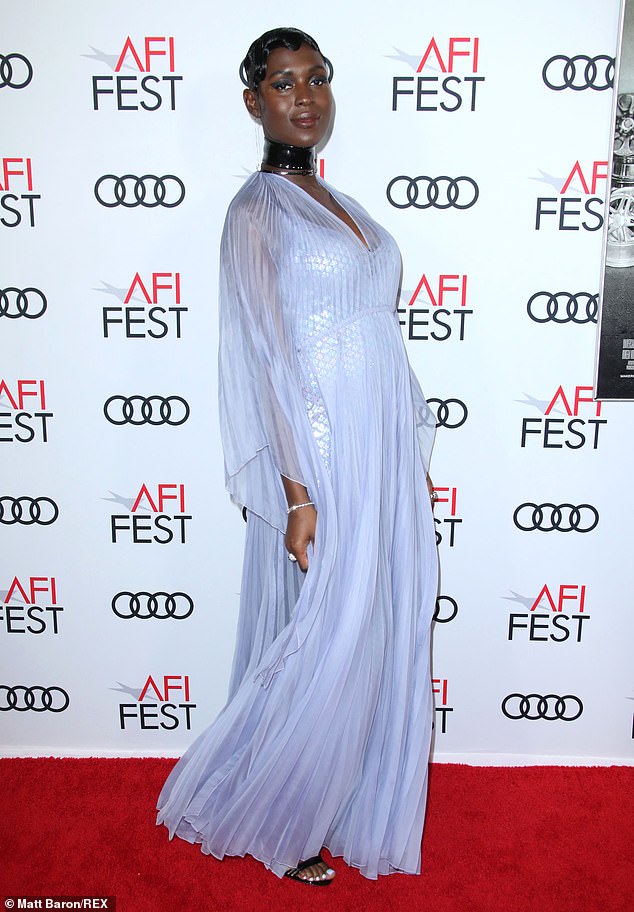 Jumping ship: The couple recently spoke about their future plans for their family and that they want to raise their baby outside of the U.S (pictured in November)

At the start of the year, the sweethearts made their first major joint appearance as a couple at W Magazine’s pre-Golden Globes party at the Chateau Marmont in West Hollywood, California.

READ  Young Sheldon season 4: Has season 4 been delayed? When will season 3 finish?

Before that, while they were on vacation together in Jamaica, Jodie posted a racy nude shot on New Year’s Day to her Instagram that Joshua took, in which she’s silhouetted against a beautiful beach and sky view.

‘The last 10 years have been quite the ride!!! I laughed, I cried, and, most importantly, I LEARNED. keep going,’ she continued.

‘May we all see that our wildest dreams *continue* to come true,’ Jodie concluded, adding the cheeky hashtags #LiveFootageOfMeInMyElement and #ItsNotAThirstTrapIfYourManTakesThePhoto. 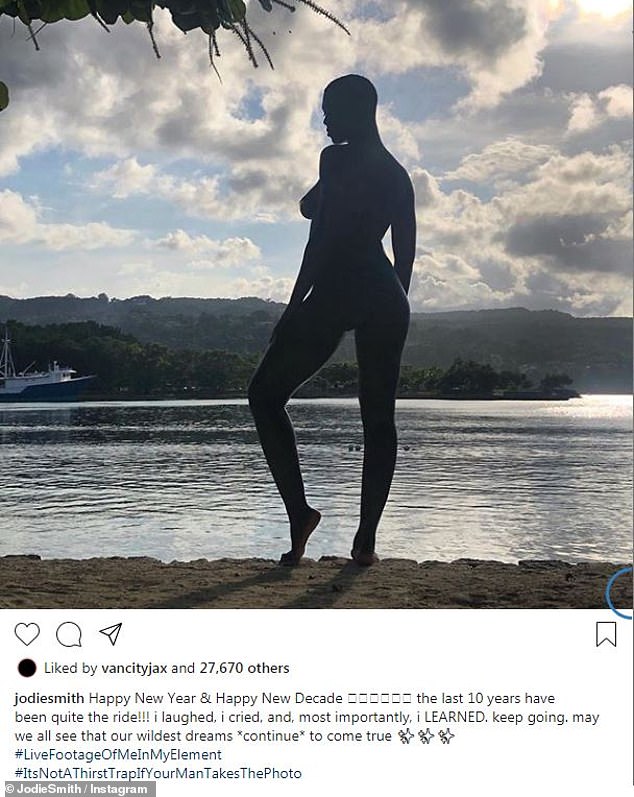 Teasing: Jodie posted a racy nude shot on New Year’s Day to her Instagram that Joshua took, in which she’s silhouetted against a beautiful beach and sky view

In December, it was reported that Jodie and Joshua tied the knot after picking up a marriage license in Beverly Hills in August.

Yet despite the reports, Jodie still refused to officially confirm her nuptials to the publication during her candid interview.

‘People are assuming whatever they want, but when people tell me “Congratulations,” I say “Thank you,”‘ she coyly revealed.

The Times article also goes in to the Peterborough, England-born actress’s upbringing and move to the U.S. at an early age.

Queen & Slim will be released in UK cinemas on Friday 31 January 2020. 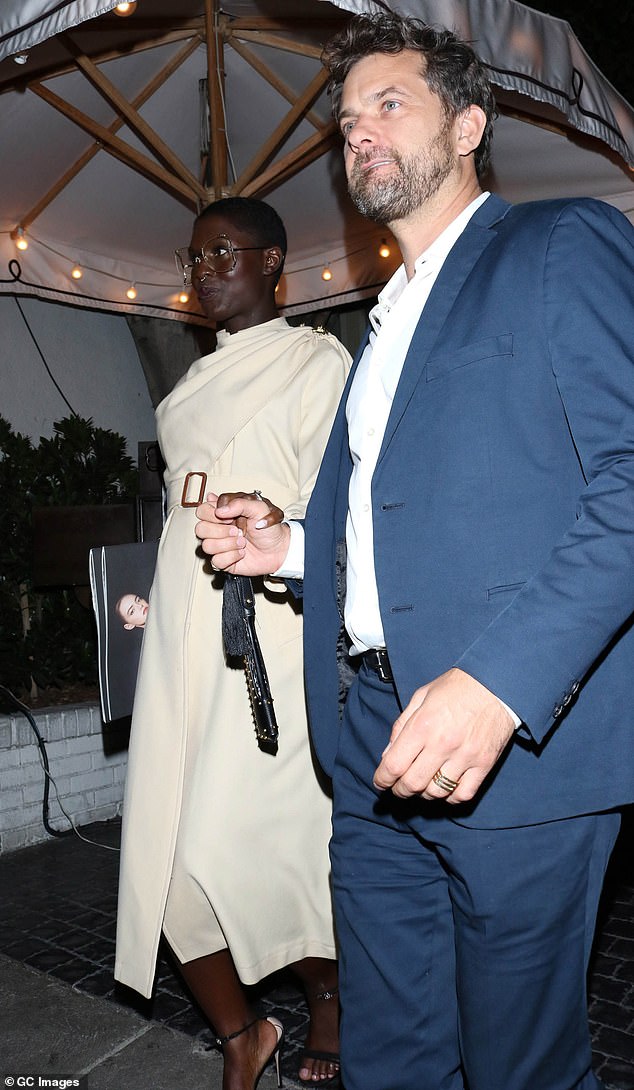 Mr and Mrs? In December, it was reported that Jodie and Joshua tied the knot after picking up a marriage license in Beverly Hills in August – she is still yet to confirm the nuptials