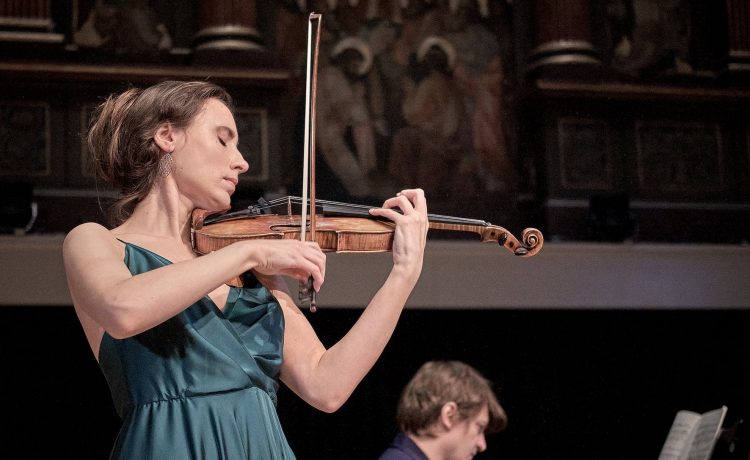 One of the few pleasures of lockdown has been watching musicians making the most of their temporary freedom – creating the concerts they want to create, choosing works they love without having to worry about filling a concert hall. The latest example is a new digital concert series – the Polyphonic Concert Club – featuring everything from Bach to Steve Reich.

The series launched this week at St George’s Bristol with violinist Jennifer Pike. The former BBC Young Musician winner is a captivating performer, whose thoughtful repertoire choices and breadth of musical interest are matched by impeccable technique.

Here, reunited with Petr Limonov, her duo partner from 2019’s The Polish Violin, she was in her element in the shimmering, elusive sound-world of Szymanowski.

His eerily beautiful Lullaby is less a song than the ghostly memory of one. Pike emphasised its ambiguity in the soft, velvety rasp of the low opening, supported by Limonov’s hypnotic piano, before releasing us into an otherworldly fantasy of fluttering harmonics.

This was a different composer to the 21-year-old author of the Violin Sonata in D minor, a musician embracing the rapturous richness of late Romanticism, indulging in virtuoso display. There was no crowd to please in an empty St George’s, but Pike played up to the drama, throwing the opening chords of the Allegro out into the space, setting it ringing, before drawing us in tight with the wriggling frenzy of the closing tarantella.

Pagannini’s Caprice No 20 is another showpiece, but performed here in Szymanowski’s subtle arrangement for piano and violin it loses some of its virtuoso steel, softening into something better suited to the wry beauty of Pike’s playing, which lacks the look-at-me bite of some other soloists.

It’s as a collaborator that she’s really in her element, as heard here in the sunny interplay between violin and piano of Mozart’s Violin Sonata in G major. A programmed encore of Massenet’s “Meditation” from Thais was an exercise in restraint – a musical bonbon to send us home happy, but never oversugared.

READ  Watch Gorillaz and Beck perform inside ‘Animal Crossing’
Share on FacebookShare on TwitterShare on PinterestShare on Reddit
newsgrooveMarch 16, 2021