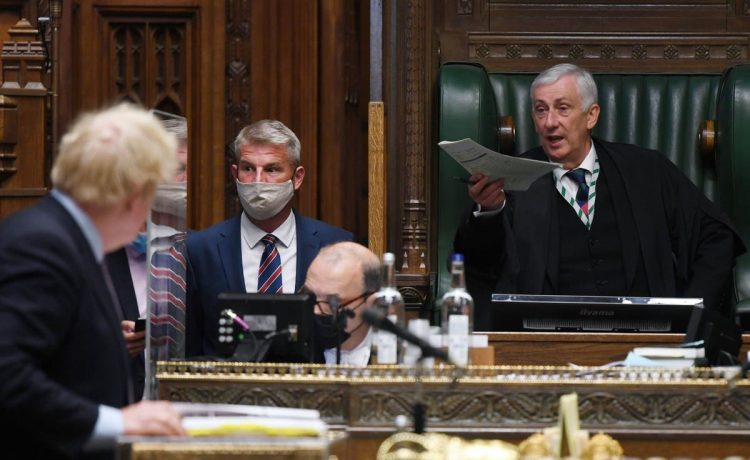 “Ofsted was not the question,” he thundered at Boris Johnson as the Tory leader hijacked another set of questions to score a political point.

At one point, Mount Hoyle was in such a simmer to cut off the PM from another partisan tangent that he accidentally confused Kensington MP Felicity Buchan with former Rear of the Year winner Felicity Kendal, star of ‘70s sitcom The Good Life.

Johnson looked pleased with himself.  One gets the feeling that the Prime Minister enjoys winding up the earnest-hearted Speaker even more than he does Sir Keir Starmer.

Certainly, Sir Lindsay seems at times to be the angriest MP in the chamber.  Unlike the stage crossness of Sir Keir at the Dispatch Box, or the button-popping pantomime rage of SNP leader Ian Blackford, the Speaker is transparently sincere and deeply devoted to the good of the House.

The weekly clash of Starmer and Johnson began with Labour’s leader reheating last week’s resignation of catch-up tsar Sir Kevan Collins, spiced up with a jibe that Rishi Sunak vetoed a proper education package and “the Prime Minister rolls over”.

Quite how it helps Labour’s cause to reassure voters that the most popular member of the Cabinet is really in charge, rather than the berk who got stuck on the zip wire and spent daft money on wallpaper, was not clear.

Johnson retorted that Sir Keir “needs to do some catch-up on his own mathematics” because his plan was the “biggest anywhere in the world”.  Donald Trump could have written that one.

Moreover, said Johnson, he wanted to help those kids whose parents could not afford private tutors, implying that Starmer was somehow on the side of the posh middle classes.

The Opposition Leader jeered: “Who does the PM think he is kidding?”  and issued a challenge to Johnson to back Labour’s even bigger plan.   Johnson doubled down, challenging Starmer in return to endorse the Government’s training programmes and also Ofsted. “He stood on a manifesto to get rid of it [Ofsted],” charged Johnson.

The Speaker butted in:  “Just to remind the Prime Minister, this is Prime Minister’s Questions – it isn’t about the agenda of the last general election.” Mount Hoyle was starting to rumble ominously.

But Johnson was more interested in responding to the Speaker’s previous intervention. “With great respect, Mr Speaker, I do think I’m entitled to draw attention to what the Labour Party stood on the last election that they haven’t yet repudiated. They did want to get rid of Ofsted.”  Mount Hoyle had steam spurting from its rocky crevices but made no response.

Turning back to Starmer, Johnson listed Tory plans that he thought Labour should back, adding: “I’ve learned in the course of the last year, that his support can sometimes be evanescent.”

Sir Keir turned to the G7 summit, demanding a global vaccines plan and a renewed effort for a deal to recognise a Palestinian state.  Johnson spotted  the chance to wind up Mr Speaker a bit more by rambling on about Labour “spending money on Brazilian dances in Hackney” and a long list of other failings.

Finally, Mount Hoyle blew its top.  Cutting off the Prime Minister in mid flow, he called the next questioner … or thought he did. “Felicity Kendal, come on up,” he called. As MPs sniggered, he realised his mistake and corrected himself: “Buchan, even!”

It is worth recalling how many times this year the Speaker has slapped down the Prime Minister.  In January, he rebuked the PM for calling Sir Keir “hypocritical”; in February he told Johnson to “drop it” after he kept referring to the Scottish “Nationalist” Party; in March he dived into a row over the PM allegedly fibbing in the House by making a statement that MPs “must take responsibility” for correcting the record if they say something inaccurate; in April he told the PM: “Prime Minister I think you should at least try to answer the question.”  On no occasion has the Prime Minister looked even slightly abashed.

PMQs finished and the simmering volcano was left to cool slowly until the next time.  Johnson breezed off to the Tea Room with a swagger and a grin, looking like he had enjoyed himself a tad more than is really decent. 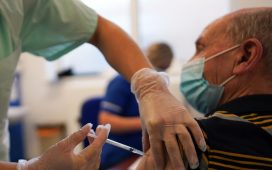