They fail to catch sight of the flying gadgets 70 per cent of the time – even when they are in their airspace, according to the findings.

And they almost never identify the machines if they are hovering motionless above the ground.

The disturbing findings uncover a ‘real and present danger’ to safety, warn US aviation experts.

‘Statistics on pilot sightings of drones continue to increase year over year, and what is being reported by pilots is probably just the tip of the iceberg. 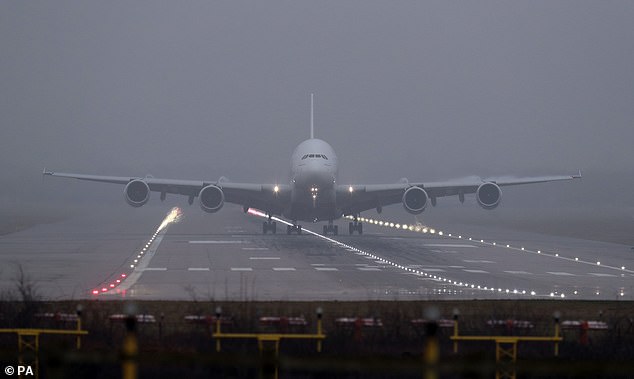 The disturbing findings uncover a ‘real and present danger’ to safety, warn US aviation experts

‘The vast majority of the time, unmanned aircraft are not being seen by pilots.’

Two years ago a drone put 130 lives at risk after it nearly hit a passenger jet on its way into London Gatwick.

During experiments, 10 certificated skilled pilots did not notice a common type of quadcopter controlled by four rotors during 28 of 40 close encounters.

A new rule requiring anyone responsible for a drone or unmanned aircraft (including model aircraft) weighing between 250g and 20kg to register as an operator will go live 5 November 2019.

The cost for this will be £9 renewable annually.

Additionally, all registered as drone operators will need to take and pass an online education package.

This is free and renewable every three years.

Both of these requirements become law on 30 November 2019.

You must not fly your drone near emergencies such as car crashes, firefighting, and search and rescues.

You can only fly drones during the day.

You must not operate your drone in restricted areas such as near airports.

You must not fly above crowded areas such as sporting events and beaches.

In other words, they saw the invading drone in about just 30 percent of cases. And when it was not moving, the task became even harder.

A mere three out of 22 motionless machines, fewer than 14 percent, were observed by the participants.

What is more, the few successful detections happened at distances of just 213 to 2,324 feet.

Even in a best case scenario, the maximum range would give a pilot roughly 21 seconds to avoid a collision.

Co author Dr Matt Vance, an aviation expert at Oklahoma State University, said: ‘That might be enough time if the drone was hovering in one spot, but not nearly enough if it’s in flight, headed for the aircraft.’

He explained: ‘The situation is far more dangerous when both aircraft are moving. Our eyes are attuned to movement. When a drone is not moving, it becomes part of the background.’

The study published in the International Journal of Aviation, Aeronautics, and Aerospace (IJAAA), highlights the scale of the threat for the first time.

An aircraft’s final approach for landing is an especially risky time because a drone ‘can catch you unaware and you have little time to react.’

Co author Prof Jon Loffi, also of Oklahoma State, added: ‘You don’t have the altitude to manoeuvre safely, and if an engine ingests a drone, that could bring the aircraft down.’

In a unique analysis the US team examined what happens as a pilot prepares to land and switches from instrument guided to visual flight. The participants were selected from a college flight training program.

During the tests they carried out an approach to landing in a Cessna 172S while a DJI Phantom IV quadcopter drone flew a scripted series of manoeuvres along the same path. The pilots were told they may or may not encounter a drone. 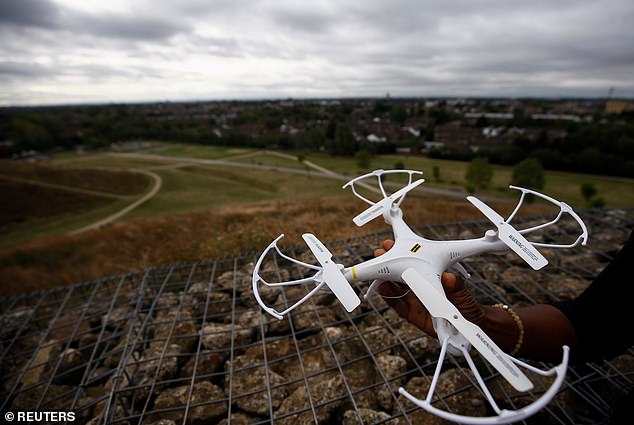 During experiments, 10 certificated skilled pilots did not notice a common type of quadcopter controlled by four rotors during 28 of 40 close encounters. A drone is pictured near Heathrow Airport in London

In the US, there are currently more than 1.4 million registered drones, and likely many more unregistered ones. They continue to proliferate, Dr Wallace said.

The number of drone users in the UK is unknown, but the Civil Aviation Authority has estimated 170,000 people will sign up to a proposed registration scheme.

Close calls between drones and commercial aircraft are on the rise. Last week a commercial crew on approach to Boston’s Logan International Airport reported a drone at about 3,500 feet – higher than US Federal Aviation Administration (FAA) regulations allow.

Just a week earlier after another crew spotted a drone after take-off from the same airport.

Dr Wallace and colleagues said the FAA has made strides to secure control airspace from drone incursions. But ‘their efforts have been met with mixed results,’ they added.

There is currently no reliable method for tracking drone flights within the United States.

The researchers now plan to rig a drone with an electronic device that uses surveillance technology to track aircraft. They will assess whether it helps pilots pinpoint and avoid a collision. 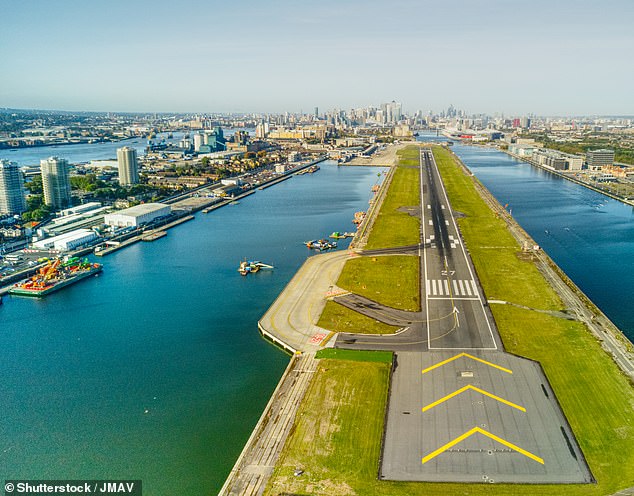 Runway view from the west just before landing at London city airport. As successful sightings were made on the descent, even in a best case scenario, the maximum range would give a pilot roughly 21 seconds to avoid a collision

Leveraging drone remote identification data has been proposed as a way to reduce the risk of accidents.

As of January 2020, no aircraft will be allowed to fly in controlled airspace near airports without tracking technology, said Dr Vance.

But the law does not extend to small unmanned aircraft. If all drones had such technology, pilots would have a more complete picture of the skies around them, thereby improving safety, he said.

READ  Green van man! Ford approves the use of eco-friendly biodiesel in its Transits

In July 2017 a drone passed directly over the right wing of an Airbus A319 as it prepared to land at London Gatwick in West Sussex airport.

It was described by the UK Airprox Board (UKAB). as ‘very large, certainly not a toy’, with four blades and a diameter of about three feet.

A safe landing was completed despite the presence of the drone but the report warned: ‘A larger aircraft might not have missed it, and in the captain’s opinion it had put 130 lives at risk.’

The airline involved and the origin of the plane was not identified. Last April a pilot was forced to take an unplanned turn to avoid a ‘high-risk’ drone crash.

The Airbus A320, which was carrying up to 186 passengers, was also approaching Gatwick when the drone was spotted, the UKAB said.

The plane was flying at 1,700ft (520m) – drones are not permitted above 400ft. The aircraft was level with the drone but the pilot turned to the right by up to eight degrees, putting a distance of 80-100ft between them horizontally.

UKAB concluded the near-miss April was category A, the highest risk. The airline involved was again not identified.

Three other category A drone incidents were highlighted in the report – two in June and another in May.

Last December three days of chaos ensued after drone sightings at Gatwick caused 1,000 flights to be cancelled or diverted, ruining Christmas for 140,000 passengers.

Summer WON'T curb the spread of the coronavirus, study finds

Here's how your body gains immunity to coronavirus | Zania Stamataki

Scientists can model this pandemic, but politicians must take the decisions | David McCoy