It took six years for David Beckham’s Inter Miami team to make it onto a football field. It’s going to take a while longer for success to follow. Under the guidance of head coach Phil Neville, the second-year expansion team is ending the season well adrift of the MLS playoffs.

After leaving the England women’s team to join his old Manchester United teammate in Miami, Neville was unable to lift a goal-shy roster into the Eastern Conference’s top seven. Six straight losses – by a combined score of 16-1 – undid a promising mid-season revival that saw only one defeat in 11.

Neville was recently fined for claiming Miami were “being cheated” by MLS referees, but it was a conference-low 35 goals in 33 games and a lack of collectivism that proved Miami’s undoing. In mid-October, Neville admitted his team would be “bottom of the league by a long way” but for 12 goals from Gonzalo Higuaín.

Despite late-season signs of life – including a 5-1 win over Cincinnati – Miami were left needing a miracle. Saturday’s 3-1 defeat at home to New York City, at which Beckham was present, extinguished faint playoff hopes and left Miami 11th out of 14 teams in the Eastern Conference, with one game remaining.

Neville’s position isn’t under threat, despite this underachievement. “I’d be lying if I said I didn’t expect us to finish higher and I take responsibility for that. But I can’t wait for 17 January to attack next season as quick as possible,” he said on Friday.

Neville speaks of the need to for the team to become younger. During a recent press conference, he told the Guardian: “I think this MLS is a young person’s league. Maybe 10-15 years ago it was seen as a retirement league. Now some of the best young players are coming through the academies. We’re a club that wants to produce our own players and we’ve given debuts to some of our academy players.”

With the coach’s emphasis on reducing the average age (Miami have the fifth-oldest squad in MLS) and the acknowledgment MLS isn’t pasture for aging Europeans, the 2021 signing of defenders Ryan Shawcross, 34, and Kieran Gibbs, 32, baffles. In truth, there are few signs the club is operating under a clear vision, on the commercial or playing side. In a damning report in The Athletic in August, a club source said: “We launched a brand, not a team.” On the field, Neville bemoans the absence of a roster “more interested in the team than themselves.”

The expansion-team-finding-its-feet defence doesn’t wash these days. Nashville joined MLS alongside Miami, sit second in the east and will move to a 30,000-seater stadium next season. In 2018, Atlanta United won MLS Cup in their second season.

Sporting director Chris Henderson, a January acquisition from Seattle Sounders, could provide a more coherent team-building strategy. The continuity offered by a second-year coaching team will benefit Miami if Neville finds his feet.

Neville’s desire to field younger players is achievable but boosting the squad quality is more challenging. The club is hamstrung by $2,271,250 salary cap sanctions, spread over 2022 and 2023. Excluding the three designated player (DP) spots, each team can only spend $4.9m on player wages a season, leaving Miami down around 20%.

It means Neville’s aspirations of blooding “two, three, or four” players from Miami’s reserve side, Fort Lauderdale CF, must be realised. Due to existing commitments, enlisting new DPs is trickier. The current trio of Higuaín, 33, Matuidi, 34, and the unfavoured Rodolfo Pizarro all have deals for next season.

“It’s a difficult situation for everybody. The sanctions mean next year we’re going to have to be really, really good at building a roster,” Neville said. “Me, Chris Henderson and the ownership will sit down and think of the best way to build a roster to be competitive.

“This club has to be competitive. There are no excuses, whether we put the youngest team, or the oldest team out there. Come the first game next season, the supporters, ownership, manager, players, and MLS will be expecting us to compete and win games of football. This club has to win trophies, that’s what I as a manager have to deliver.”

Harnessing local talent was part of the club’s pitch. In 2018, Beckham promised to build a “state of the art” academy and now has U-12 through U-17 teams playing at the first-team’s training facility. Beckham is a regular at games and, by all accounts, gracious with his time with watching parents.

It’s intertwined with the club’s efforts to join the fabric of the community, embracing the area’s Latin heritage. It started with the name – Inter Miami Club de Fútbol – and is reflected in the stands with a loud core of supporters dubbed “La Familia”. On humid Florida nights, it feels like a South American arena.

Max Ramos of The Siege supporters group says: “We’re a fútbol club in an American sports league. The Supporters’ Section is extremely Latin and the majority of the fanbase is Hispanic. The club has done a really good job of allowing us to go with a South American atmosphere within an American framework.

“Of course, there are things that you can’t do next to an airport in Fort Lauderdale, that you can at La Bombonera in Buenos Aires! I can’t launch a flare, for example. But the music, the lighting, it’s very Miami.

“Could they do more, like having a stadium announcer, or more media in Spanish? Sure. But it’s still a work in progress.”

Local enthusiasm is waning slightly. Attendances are down up to a quarter on the mid-season peak of 17,925. But this is south Florida. Historically, winning cures all. The excitement can be relit. “Everyone’s pissed right now, but it can all change in a year,” Ramos adds.

Efforts to intertwine team and community – like September’s “Celebra Tu Patria” Hispanic Heritage Night – remain difficult while Inter play in another city, an hour’s drive away. The temporary stadium is in Fort Lauderdale, a much different cultural vibe. Word on the planned 25,000-seater stadium development in Freedom Park Miami is scant.

“The stadium in Fort Lauderdale is lovely,” Ramos adds. “They’ve done a brilliant job of making it feel like a proper football stadium. If it was built in Miami instead of Fort Lauderdale, no-one would care. The problem is the name says ‘Miami’.”

Neville, for one, acknowledges little is ideal for the club’s patient fans right now. “The supporters have suffered and suffered badly,” he said on Friday.

“We’ve got great plans for this football club, and I feel this season we’ve put some of the bricks in the foundations to be successful in the years to come. It was never going to be a quick, overnight turnaround; it never is in football.”

Neville has faced questions about the club’s ambitions multiple times a week lately, but this is still “David Beckham’s Inter Miami”. Neville says Beckham is “frustrated” and “wants better”, but fans may appreciate occasionally hearing from the man who appointed the manager.

Neville’s first season in club management has been deeply disappointing. He only shot par with England women; now he must prove his Miami appointment wasn’t just jobs for the boys. 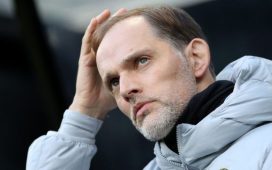