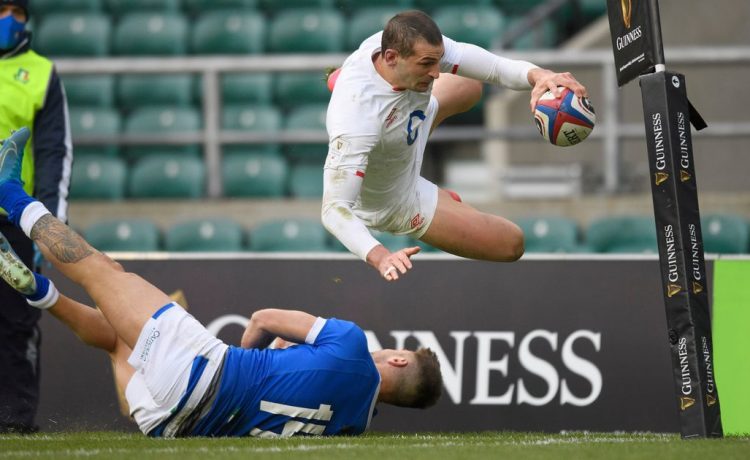 So the mission to become the “greatest team the world has ever seen” is back on track.

A week ago against Scotland they resembled the worst England team Twickenham had ever seen.

Yesterday Eddie Jones’ side at least took a step in the right direction towards his wildly ambitious goal.

But it was a mighty small one.

A win against Italy, with respect to the Azzurri, means nothing. England have never not beaten them.

Progress could only be measured in improved performance against opponents winless in the Six Nations since 2015.

In their ability to start fast after being left in the stalls by Gregor Townsend’s tartan marauders.

To address a penalty count that got ugly fast against the Scots. To shut the door at the back and not give away any easy tries.

This was the stuff of Jones’ nightmares, as if someone had paused the Calcutta Cup tape, left it seven days, and restarted it.

England recovered, as sadly all teams do against Italy. Jonny Hill, Anthony Watson and Jonny May, spectacularly, each went over for tries before half-time.

But this was a team playing only in fits and starts. Passes went to ground, inaccuracy reigned.

As the contest wore on so frustration grew, most notably in captain Owen Farrell.

After his side had been pinged for a sixth time Farrell boiled over, unwisely offering Scottish ref Mike Adamson a piece of his mind.

Moments later he clattered late into the back of Italy scrum-half Stephen Varney. His head caught Varney’s who dropped to the ground.

Few saw it as in the same move Watson intercepted Paolo Garbisi’s pass and ran it back 80 metres for a try.

But the officials did and Farrell faced an anxious wait before it was ruled, somewhat surprisingly, that the skipper had no case to answer whatsoever.

Relief turned to anguish as Jack Willis came off the bench to score his first England try only to let out a cry of anguish as he then wrecked his knee.

Distracted by what, admittedly, was a highly distressing moment England dropped their guard to again let Italy in through a smart Tommaso Allan try.

They did recover their composure to claim the final points, but this was a win to put fear into no-one, a pale imitation of France’s 50-point romp in Rome a week ago.

England allowed Italy their highest points tally in the fixture since 2008 and profited not from collective excellence but individual moments of class.

Yes they returned to winning ways, but rugby’s greatest team? That remains a distant dream.

A bystander against Scotland, two sharp tries here to take his England career tally to 20

Such a classy footballer, nice to see him get an opportunity to show glimpses of it this week

Still looks out of sorts, lucky to avoid a card as frustration boiled over

Worked tirelessly at the breakdown and topped England’s tackle count