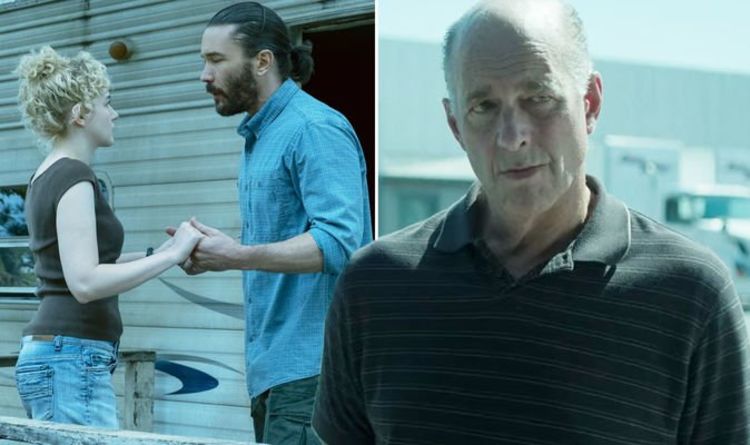 Wendy’s (player by Laura Linney) brother Ben (Tom Pelphrey) arrived in the Ozarks to reconcile with his older sister after being fired from his job as a teacher. Netflix viewers saw Ben’s reckless nature from the off, after beating and bloodying a student before heading to live with the Byrdes. Little did he know he was about to discover his sister and her husband Marty’s (Jason Bateman) criminal operation for the Navarro Cartel which would result in deadly consequences.

Spotting the threat Ben posed on her business, Wendy did everything she could to stop him from blowing the lid off their operation.

And when she spotted he’d stopped taking his medication for his bipolar disorder, Wendy seized the opportunity to have him taken to a psychiatric hospital.

However, Ben’s new girlfriend Ruth Langmore (Julia Garner) wasn’t going to sit idly by and watch her boss take her new lover away and used her ties to have him discharged.

Ruth’s actions would prove fatal, however, as Ben’s first stop upon his release was to furiously confront the cartel’s lawyer Helen Pierce (Janet McTeer).

Ben laid all his cards on the table, screaming at Helen for her business alongside his sister and brother-in-law in front of her teenage daughter Erin (Madison Thompson).

Not one to be undermined or shy away from taking drastic decisions, Helen recognised the threat Ben now posed to the organisation and knew he had to be taken out of the picture.

READ  Disney+ to Hulu to Netflix: All the major streaming services, ranked

In heartbreaking scenes, it appeared Wendy and Marty agreed and Ben’s sister led him to an isolated diner under the guise that she was helping him escape.

Instead, hitman Nelson (Nelson Bonilla) arrived at the scene and killed Ben before returning his body to Marty to cremate at his funeral home.

However, all may not have been as it seems as one fan has suggested Ben was saved as part of a wider plan by the Kansas City Mob and its leader Frank Cosgrove (John Bedford Lloyd) – and there’s some evidence to support it.

Under the Reddit thread ‘[Spoilers] Reasons and my take on the crazy s**t that happen in the end of season 3’, user gegebhatt explains.

They state: “Okay so you all know how we never see Ben’s face after they imply that he was taken out.

“I think that the mob was keeping a close look at Helen’s activities and had already intervened and saved him and knew that Helen was trying to bring them down instead of helping them grow the business.”