It is the most glittering night of the television calendar which sees stars of the small screen unite to celebrate their achievements.

This Morning presenters Phillip, 57, and Ruth, 59, shunned  rumours  they are embroiled in a feud as they happily posed up for a lift selfie with their daytime TV co-stars. 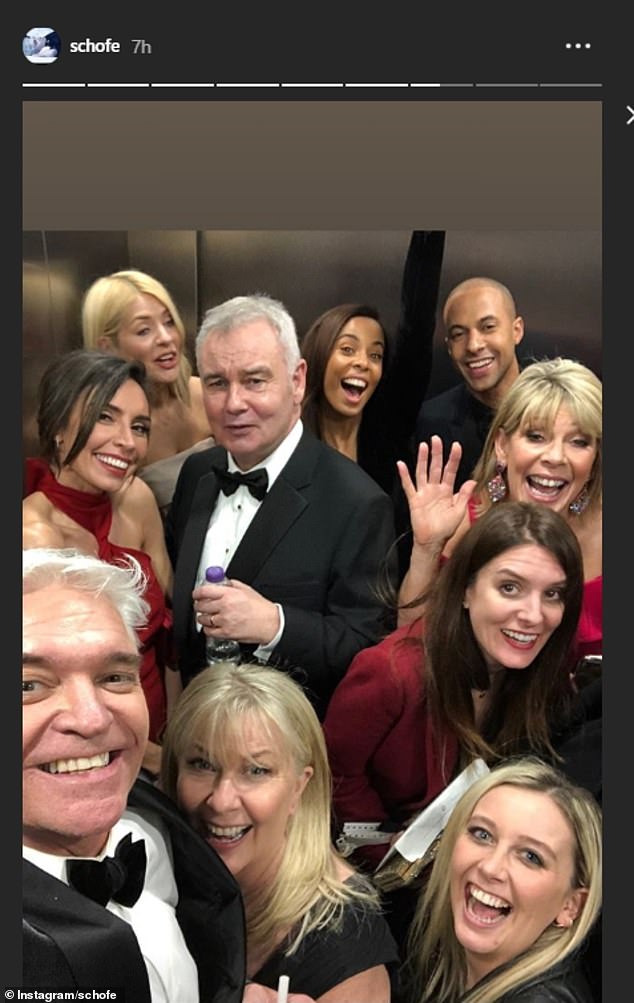 Joining stars including Holly Willoughby, Eamonn Holmes, Rochelle and Marvin Humes and Christine Lampard, the stars looked cordial as they posed on opposite sides of the lift.

Ruth’s frosty relationship with Phillip became the talk of Twitter on Tuesday night, as the stars shared the stage at the National Television Awards.

As their show scooped top prize in the Live Magazine Show category, Ruth, who was seated behind Phillip and Holly Willoughby with her husband and co-presenter Eamonn Holmes, made her way to the stage at London’s O2 Arena.

And viewers couldn’t help but point out the ‘frosty’ and ‘awkward’ interaction between the TV personalities, following reports that Ruth filed a formal complaint with ITV bosses in December about Phil. 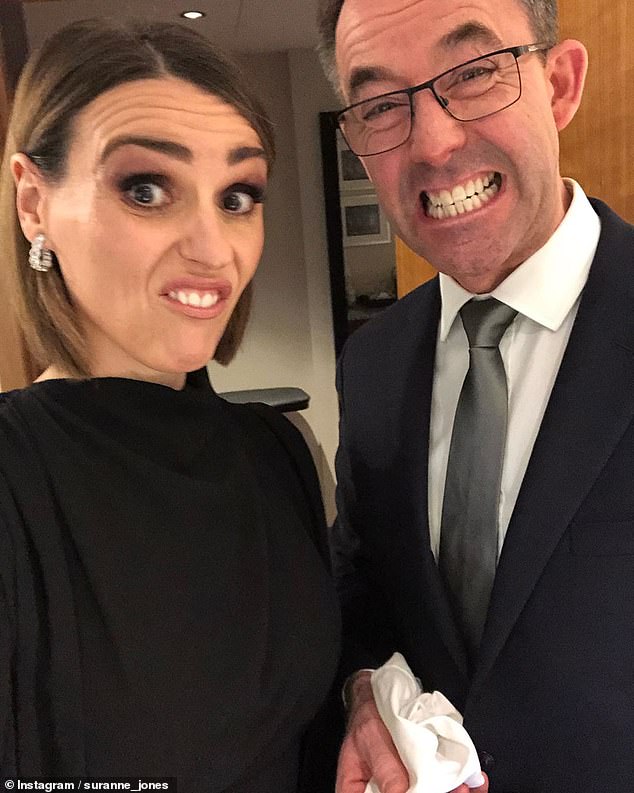 Acknowledging that the alleged feud is said to have been caused by Phil cutting off Ruth during a live segment handover, one viewer wrote on Twitter: ‘Absolutely SCREAMING at Phillip thanking Eamonn and Ruth and FINALLY alerting them speak after ten years. HR department at ITV found rotting.’

Last month, Phillip was accused of creating a ‘toxic atmosphere’ for his This Morning co-stars, with allegations of ongoing spats with Holly and stand-in hosts Ruth and her husband Eamonn.

It is claimed eight different ITV presenters have broken their silence regarding Phillip’s attitude, while Ruth is thought to have made a formal complaint to ITV’s new head of daytime TV Emma Gormley.

It followed an incident in April which saw Phillip interrupt Ruth while she was presenting a preview of Loose Women during This Morning. 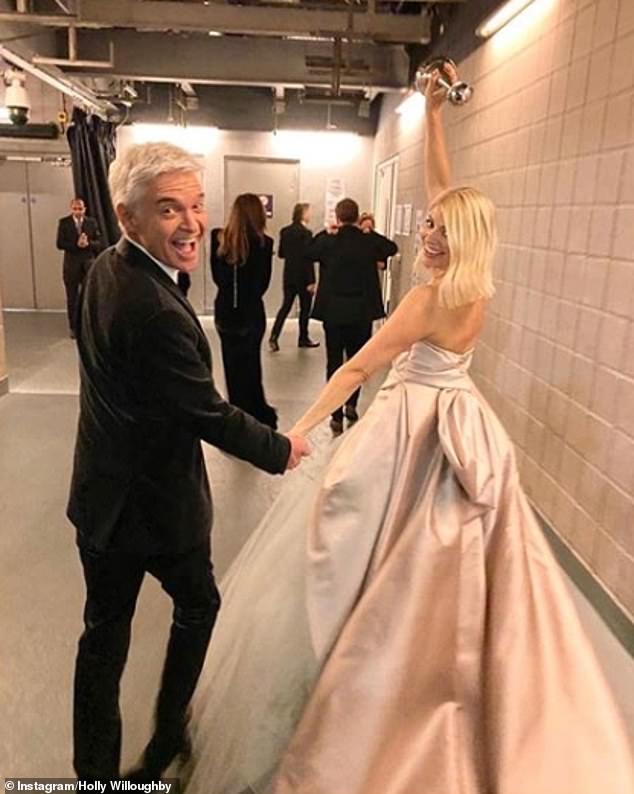 Success story: Holly Willoughby shared an Instagram of her holding hands with Phillip Schofield as they celebrated their NTA win by holding the award aloft 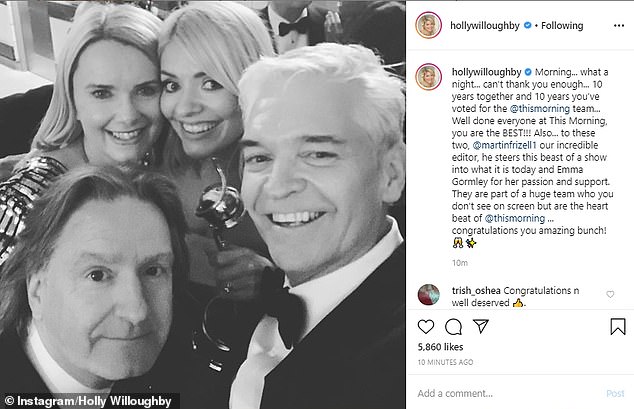 Fun: Holly also posed up with the This Morning team as she revelled in the win

An ITV source told The Sun: ‘For so long people have been silenced because they are scared for their job. If they speak out publicly about the atmosphere they fear there could be repercussions.’

Hitting back at the reports, a spokesperson for ITV said: ‘It’s deeply disappointing and unfair for Phillip to be the target of this sort of malicious gossip.

‘Phillip is a much respected broadcaster and colleague and this is absolutely not a description of This Morning that we recognise.

‘Holly and Phil are great friends both on and off screen and are popular among viewers and colleagues alike.’

Phil also slammed the rumours as he discussed the ‘lovely team’ during the Dancing On Ice launch.

The TV star said: ‘Can you imagine a feud between us ever happening? It’s not as if we have to defend anything.

‘Everyone who knows us, I mean, everyone at This Morning was like, “What the hell?” The atmosphere in our studio is so wonderful, there’s such a lovely team. Everyone is lovely.’

Suranne, who was nominated for Best Drama Performance for Gentleman Jack, struck a playful pose backstage with husband Laurence Akers, as they both bared their teeth,

She wrote: ‘Taking it all very seriously.’

Holly Willoughby shared an Instagram of her holding hands with Phillip Schofield as they celebrated their NTA win by holding the award aloft.

She captioned the snap: ‘This may be my favourite photo of me and @schofe ever!’

Ant McPartlin and Declan Donnelly made history at the National Television Awards on Tuesday as they won the Best Presenter Award for the nineteenth year in a row.

This Morning was also a big winner of the night, with Holly Willoughby, 38, and Phillip Schofield, 57, rejoicing with glee as they kept their decade long reign as Best Daytime Show.

The This Morning win, however, came with a tinge of behind-the-scenes scandal, as presenters Holly and Phil accepted the gong next to Ruth Langsford and Eamonn Holmes, who are said to be in the midst of a major feud with Phil.

Fellow nominees Bradley Walsh, Graham Norton, Holly and Phillip jokingly rolled their eyes as iconic TV duo Ant and Dec, both 44, took to the stage at the O2 Arena to receive their Best Presenter accolade.

Drag Race UK’s Michelle Visage presented the award to Ant and Dec, who told the audience they were ‘grateful and humble’ to continue their reign as Best Presenter.

Ant said: ‘On our way in we had the chat, like we normally do, about this year being the year we don’t win it and we were like “look it’s been a great run and we’re very lucky to do what we do” and then you go and do this again. Thank you.’

Dec added: ‘It never gets easier sat there. If anything you feel more and more sick every year.

‘Thank you to so many people – to our management, to all of the support we continually get from ITV, to everybody who works on all of our shows who make us look good, but most of all everybody who took the time to vote.’

Ant made his TV comeback last January after taking a break from presenting for most of 2018 following his drink-drive arrest in March.

The Geordie star was convicted of drink-driving, given an £86,000 fine and a 20 month driving ban following a three-car smash in March and later checked into rehab.

In August 2018, Ant revealed he was taking a break from presenting with co-host Dec to focus on recovering from his painkiller addiction, months after his drink-driving charge in April.

The presenter previously credited Anne-Marie as being ‘his rock’ as he battled with drug and alcohol addiction and took time away from the spotlight.

As well as scooping the prize for Best Presenters, Ant and Dec were also presented the Bruce Forsyth Entertainment Award for I’m A Celebrity – which they dedicated to those who have battled the bush fires in Australia.

They were joined on stage by the jungle class of 2019, with reigning Queen Of The Jungle Jacqueline Jossa dubbing the duo ‘the nicest guys in television’.

Another big winner on the night was Jesy Nelson, who broke down in tears when she scooped a trophy in the Factual category for her documentary Odd One Out.

The Little Mix star admitted she was ‘overwhelmed’ as she accepted the top prize for her heart-wrenching film, which focused on the bullying and trolling she endured since rising to fame.

And as her proud boyfriend Chris Hughes looked on from the front row of the star-studded audience, Jesy, 28, wept while thanking him for boosting her confidence. The singer said: ‘I’m so sorry, this is so overwhelming. I’m such a baby! Thank you so much.’

After thanking the producer and director and her mother, she turned her attention to Chris, as she gushed: ‘I want to thank Chris, my boyfriend for bringing me up every day and making me feel confident.’

She continued: ‘I want to thank every person that voted. You have no idea what this means to me, to us. I don’t think we expected this reaction when we made it…

‘I’m so grateful that such a negative experience in my life turned into such a positive one.’

Hosts Tess Daly and Claudia Winkleman hugged as they graciously took to the stage with the Strictly cast after winning Best Talent Show.

The Impact Award was bestowed upon sitcom Gavin & Stacey, which returned this Christmas for a one-off special, attracting 18million viewers.

Jesy Nelson: Odd One Out [WINNER]

Paul O’ Grady: For The Love of Dogs

The Great British Bake Off [WINNER]

Bella Thorne displays 'bruises all over her body' in workout gear

How to make a Christmas bauble wreath

Deliveroo is doing 25% orders for Black Friday – and it includes Subway, Prezzo and Byron