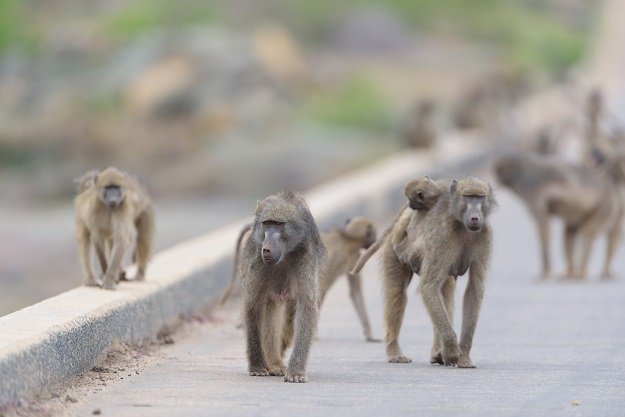 The NSPCA no longer supports using paintball guns on primates.

The National Council of Societies for the Prevention of Cruelty to Animals (NSPCA) has withdrawn its support for the use of paintball guns to shoot primates, after a juvenile baboon was killed in Simon’s Town.

The City of Cape Town maintains the use of paintball markers assists in keeping baboons out of harm’s way by diverting them from urban areas.

However, the NSPCA has rejected the method after a juvenile male baboon was found dead in the garden of a Simon’s Town resident.

Following an autopsy, a veterinarian confirmed the cause of death was a pellet wound to the chest.

“Just because a practice was conducted years ago does not mean it should be continued today, especially when there may be alternative methods that can be used to achieve the same outcome,” the animal welfare group stressed.

“There are also no comparable deterrent practices against which anyone can measure the effectiveness of paintball marking,” it added.

The City has expressed concern, saying the killing of the juvenile male baboon from the Waterfall Troop demonstrates why keeping baboons out of urban areas is crucial.

“Urban areas are not safe for baboons and, as such, we want to inform residents that a juvenile male baboon was killed with a pellet gun in Simon’s Town last week.

READ  Dishing the dirt on an early man cave

“Keeping baboons out of urban areas reduces their risk of death and injury by other human induced means, such as car accidents, or unlawful killings, and attacks by dogs,” the City said.

The City’s mayoral committee member for spatial planning and environment, Marian Nieuwoudt, said: “Seeing that the NSPCA does not recommend alternative aversion tools that are proven to be effective, it is unclear how baboons can be encouraged not to enter urban areas in future.”

She said the NSPCA’s decision to withdraw the use of paintball markers, as a scientifically proven and humane aversion tool in keeping baboons out of the urban areas, came as a surprise to the City.

“On 29 April, the City requested clarity about the NSPCA’s decision on the use of paintball markers and the reasons for this decision, but neither has been provided to date,” said Nieuwoudt.

She said the baboons are at a greater risk of death and injury if rangers can’t use paintball markers to keep them out of urban areas.

“The NSPCA’s decision places the City and other stakeholders in a difficult position.”

Nieuwoudt said the City’s Urban Baboon Programme is undertaken in terms of a three-year contract, aligned to the various permits and approvals, which were issued by relevant authorities, and with the support of the NSPCA, for the humane use of paintball markers.

In response, the animal welfare organisation said it had taken note of the legal threats which the City of Cape Town made against the NSPCA, and they would defend their decision, should the need arise.

However, the City said it never threatened the NSPCA with legal action, but in fact advised the organisation that it is at risk of litigation as a consequence of not consulting stakeholders prior to their decision.

“The NSPCA’s decision will have an impact on the terms and conditions of the City’s contract with the service provider. The contract will have to be reviewed in order for the City to comply,” Nieuwoudt added.

Nature Conservation Corporation Environmental Services said it will be following up with CapeNature and the residents of Simon’s Town regarding the death of the juvenile baboon.

Eyewitnesses, or anyone with knowledge about the incident, are encouraged to contact CapeNature’s Conservation Services on 082 773 4278.

Genomics-informed decisions can help save species from extinction