Some even compared the painting to “a wax figure from Madame Tussauds”.

One Twitter user, Lord Peckham, penned: “Looks like it’s been shopped onto the background, awful expressions, just altogether awful, but then their choice of photography illustrating their children is equally awful, such a shame.”

Mattdeedee1 was divided over the portrait, praising Kate’s portrayal, but not William’s, as he tweeted: “splendid rendition of Kate… Wills looks a bit too much of a geezer…”

Eyes On Fox agreed: “Not sure the artist is fond of William.” 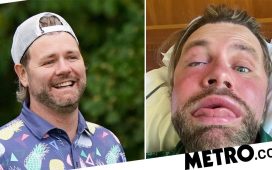