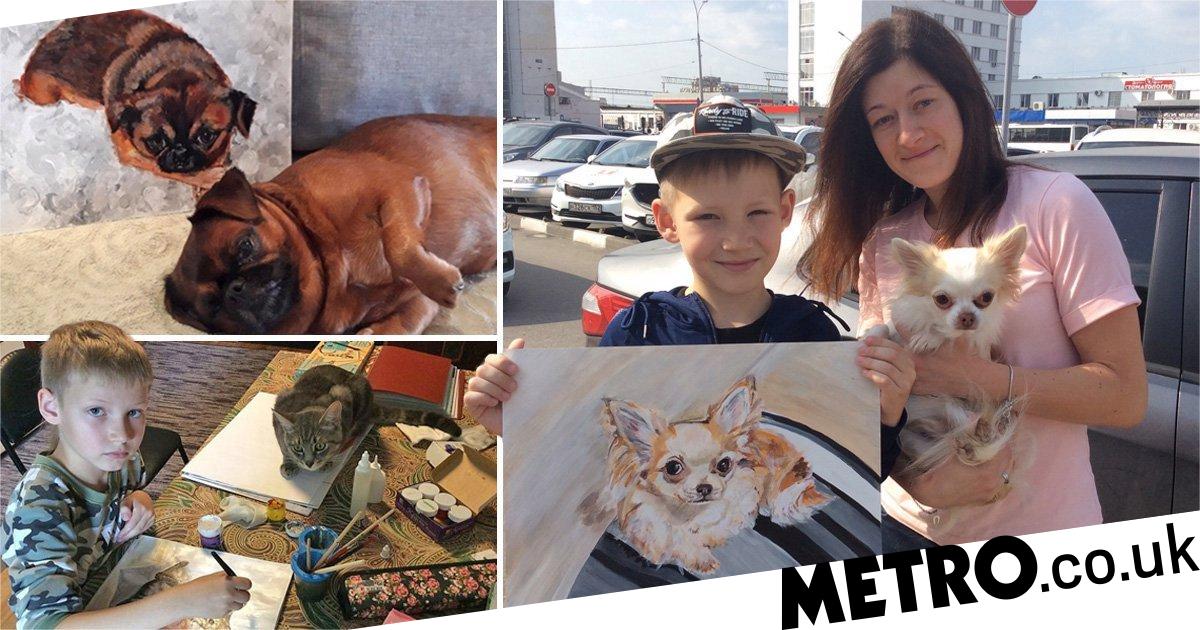 A little boy, who makes stunning animal portraits, is not only super talented but is also a young philanthropist.

Pavel Abramov, from the city of Arzamas in Russia, creates exquisite paintings of his pets and other cats and dogs and sells the works in exchange for resources for animal shelters.

The little boy started the project with the help of his mum Ekaterina a year ago.

The whole thing started when one of his pets died. Since then, he could no longer ignore the problem of stray animals in the streets.

He decided to pick up the paintbrush and help in any way he could.

Since he began, he’s sold his art for cat and dog food, medicine, skin products, and tinned goods.

With the help of his parents, Pavel has shared his work on Russian social media site VK.

Images of Pavel’s latest paintings and the animals he’s helped are shared on the site, with the title ‘What can a small volunteer do?’

On the website, it reads: ‘This is the way of a small, indifferent person who wants to be useful and to bring good to the world, to lead others.

‘He wants to show by his example that even a small person can be of great benefit if he really wants to.’

The project works by pet owners commissioning Pavel to draw their beloved animals.

He works out a deal with the owners who may agree to donate grams of buckwheat, bandages and medicine, offal, and other treats for little doggos and kitties.

And it’s not a straight-up transaction either. Pavel spends time getting to know the animals he draws and speaking to the owners about how they met.

It helps the youngster capture the essence of the doted upon pet.

He then takes the donations to the only animal shelter in Arzamas where Pavel is the youngest volunteer. The shelter currently houses more than 100 dogs.

Each one has benefitted from Pavel’s paintings.

Since news of his art has spread online, people are also interested in buying the works. If you want to see more of Pavel’s art, take a look at his VK profile and enjoy.

Here are a few more of his brilliant creations:

MORE: Woman spray paints, dresses up and throws parties for her five dogs

MORE: Little boy with Down’s Syndrome and a breathing condition models for Primark

MORE: Pilot dresses up as Batman to fly rescue animals to their new homes

READ  Brandy the dog looks rather proud as owner discovers inky pawprints all over house
Share on FacebookShare on TwitterShare on PinterestShare on Reddit
newsgrooveOctober 21, 2019

Small dogs: why are tiny hounds more aggressive than big ones?