Nina Wadia, 52, became the first celebrity to be eliminated from this year’s ‘Strictly Come Dancing’. The former EastEnders star’s exit from the popular BBC celebrity dancing programme was confirmed earlier this month. Nina and her professional partner Neil Jones lost out in the dance-off to Coronation Street actress Katie McGlynn and her partner Gorka Marquez. Nina told Rylan Clark-Neal on Strictly after show, ‘It Takes Two’, that she was “gutted” to become the first famous face to leave the competition.

While Nina’s tango may not have enamoured the Strictly judges, the star is not short of TV work.

The actress stars in new comedy thriller, ‘The Outlaws’, the first episode of which is broadcast on BBC One tonight.

The show revolves around a group of people doing community service by renovating a derelict building in Bristol.

The programme is the brainchild of comedian Stephen Merchant, who co-wrote and also stars in the new series.

JUST IN: ‘Been warned’ Meghan and Harry keeping away from UK after PR disaster, says Lady C

It also stars legendary American actor, Christopher Walken, who is known for films including ‘Pulp Fiction’ and ‘The Deer Hunter’.

Nina has her own legendary status in the UK for her portrayal of the gossip-loving matriarch Zainab Khan – previously Masood – in EastEnders.

Nina left Albert Square in 2013 after originally joining the EastEnders cast back in 2007.

Zainab’s return to the much-loved soap was put to Nina by Eamonn Holmes and Ruth Langsford during a throwback interview on ‘This Morning’ in 2017.

During the hosts’ chat with Nina, the ex-EastEnders star revealed that BBC bosses had carved out a role for her but that she had turned the offer down as she had other commitments.

Nina joined the ‘Champions’ cast in 2017, according to Deadline, although the series was later cancelled by NBC after a single season.

Speaking about her role in the show to Eamonn and Ruth, Nina said: “I play a Persian nail salon owner who is an absolute piece of work, I love her.”

Nina was asked by the hosts about balancing her family life with her acting career.

She said: “I didn’t think it through… I genuinely don’t know what I’m going to do with my family, my life or anything.”

During the interview, Nina also spoke about her role in the 2017 film ‘Finding Fatimah’.

She plays the character Khadija, a mother who is on a dating app under the alias, ‘The Brown Widow’.

Episode one of the ‘The Outlaws’ airs on BBC One from 9pm-10pm tonight. 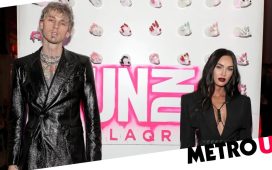