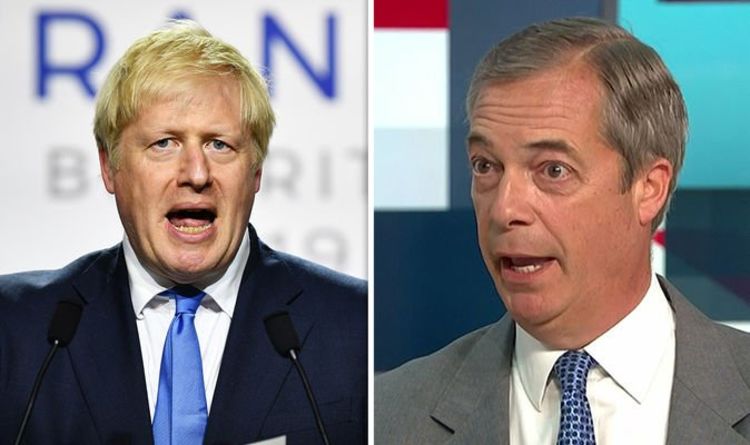 Nigel Farage has said he would put “country before party” and team up with Prime Minister Boris Johnson if the Tories committed to delivering a no deal Brexit. Mr Johnson has repeatedly said he will deliver Brexit by the end of October this year with or without a deal, but has so far failed to achieve concessions from the Brussels bloc. Opposition parties, including Labour leader Jeremy Corbyn, have said they will do everything in their power to block a no deal Brexit in the Commons, potentially pushing the UK towards a general election in October.

But, Brexit Party leader Nigel Farage has explained the circumstances in which he would work with the Prime Minister to get Brexit over the line.

Mr Farage responded to a question about the Prime Minister backing a no deal Brexit – in which the Brexit Party leader said he would support the move.

He hinted he would be willing to stand down candidates in certain seats, to ensure an alliance between the Brexit Party and Conservatives in that circumstance.

Mr Farage also claimed an alliance of that kind would be “unstoppable” and allow Britain to leave the EU without a deal.

He said: “The Conservative Party are part of the Remain establishment. They are under new leadership, they are singing a different song. We don’t yet know whether they are genuine or not.

“If the Conservative Party were to stand with Boris Johnson as leader saying that, here’s the important thing, they cannot win without the support of the Brexit Party.”

“What we will not do is stand aside and watch Brexit be betrayed for a second time.”

If the Tories backed a no deal as their main policy, Mr Farage added: “Our support and the Conservatives support together would be unstoppable, and Boris Johnson would win a very big majority.”

Labour will hold cross-party talks on Tuesday with MPs who want to block a no deal Brexit, with Liberal Democrat leader Jo Swinson attending.

The Prime Minister has said the British people were tired of Brexit being on the front pages of newspapers and that Brexit had to be implemented on October 31.

He said: “I think that it’s the job of everybody in Parliament to get this thing done, I think it’s what the people want.

“I also think by the way it’s what our friends and partners on the other side of the Channel want. They want this thing done, they want it over.”