NHS changes guidance on Down's syndrome after accused of 'scaremongering'

Mothers of children with Down’s have hailed the NHS for toning down the language in its guidance on the syndrome.

Parents had blasted the advice on the website for its ‘endless lists of problems, risks and red flags’. They heaped pressure on the NHS to change the page.

Campaigners have now thanked for the NHS for amending the advice, which wasn’t due to be revised until April.

Caroline White, an outspoken campaigner whose son Seb, 11, has Down’s and is a model for M&S, said it has now been ‘thoughtfully written’.

Her original tweet praising the move was liked by British actress Sally Phillips, whose 15-year-old son has Down’s. 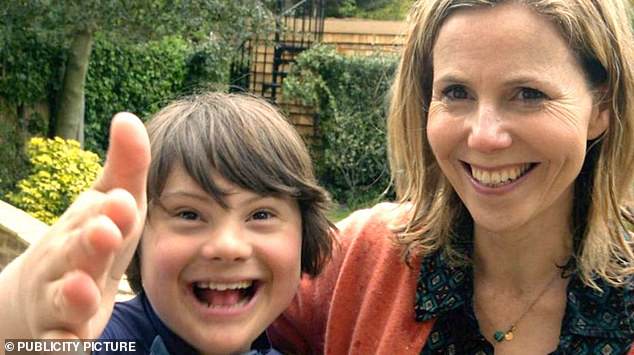 Mothers of children with the syndrome, including actress Sally Phillips (pictured with son Olly, 15), had accused the NHS of pressuring pregnant women into aborting children with Down’s 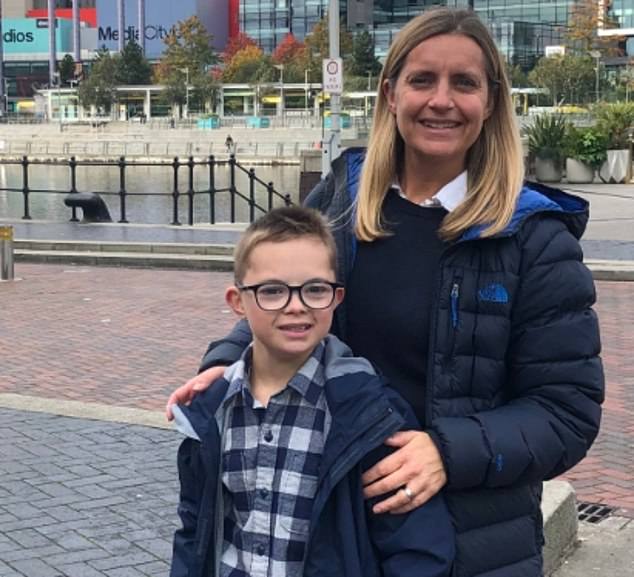 Caroline White, an outspoken campaigner whose son Seb (pictured together) has Down’s and is a model for M&S, praised the revision on Twitter

The NHS website now includes a bold yellow box which says: ‘Important. It’s your choice whether or not to have any screening tests’

She told MailOnline: ‘Myself, and many other members of the Down’s syndrome community, are absolutely thrilled with the updated information.

‘The words are balanced, impartial, non-judgmental and thoughtfully written. It is so refreshing not to be immediately presented with a list of every single “problem” or “challenge” that you may (or most likely not) face.

‘A link to real lived experience is perfect, as well as reminding the reader that people with Downs syndrome are individuals, shaped by their families and experience, just like anyone.

‘When my son was born 11 years ago, I was presented with a very bleak future of unknowns and it made me see him as “Down’s syndrome” instead of the beautiful baby he still was. It was very dehumanising.’

In its new guidance, the NHS makes a point of highlighting the unique, positive traits that shape children with the syndrome. 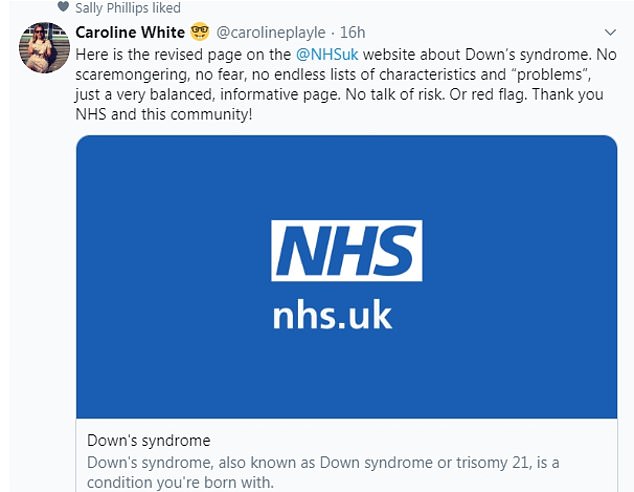 She thanked the NHS for removing its ‘scaremongering’, ‘endless lists of problems’, risks and red flags. The tweet was liked and retweeted by Sally Phillips

It says: ‘People with Down’s syndrome will have some level of learning disability. This means they’ll have a range of abilities.

‘But, like everyone, people with Down’s syndrome have their own personalities, things they like and dislike and things that make them who they are.’

Prior to the change, however, the advice designated a large chunk of the page to listing the negative health conditions linked with Down’s syndrome.

It warned that heart conditions, hearing and vision problems, thyroid conditions and infections, such as pneumonia, were all more common in children with Down’s.

The advice also told parents their child ‘may be checked by a paediatrician more often to help them stay in good health’.

Another key area which was revamped in the tweak was its portion on screening for Down’s syndrome during pregnancy.

The page now has a bold yellow box with the words: ‘Important. It’s your choice whether or not to have any screening tests.’

Whereas previously, the guidance said: ‘If these tests show that your baby has Down’s syndrome, you and your baby’s other parent will be offered counselling so you can talk about what this means.

WHAT IS DOWN’S SYNDROME?

Down’s syndrome is a genetic condition that typically causes some degree of learning disability and certain physical characteristics.

Screening tests can uncover Down’s syndrome during pregnancy but are not completely accurate.

It is caused by an extra chromosome in a baby’s cell due to a genetic change in the sperm or egg.

The risk increases according to the age of the mother.

A 20-year-old woman has around a one in 1,500 chance of having a baby with Down’s syndrome.

There is no evidence women can reduce their risk.

Down’s syndrome does not have a cure.

People with Down’s syndrome are more at risk of health complications such as heart disorders, hearing problems, thyroid issues and recurrent infections.

‘You may also be offered an appointment to meet a doctor or other health professional who works with children with Down’s syndrome.’

A screening for Down’s syndrome is offered to mothers-to-be at around 11 to 14 weeks.

While the tests cannot tell for certain if the baby has the syndrome, they can reveal how likely it is.

Parents then, if they wish, can have further tests to find out for certain if their baby has Down’s syndrome, which affects around 40,000 people in the UK.

Around 1,000 babies with Down’s syndrome are born in Britain every year. Around nine out of ten British women have abortions after being given an early diagnosis for Down’s.

Carol Boys, chief executive of the Down’s Syndrome Association, said: ‘We were delighted to have been working with NHS Digital over the last few months to update their information about Down’s syndrome.

‘We put a tremendous amount of work into making sure the new resources are balanced, accurate and use the correct terminology.

‘We have been very encouraged by the way in which NHS Digital has taken advice and consulted with us, and others across the community.

‘They have spoken to individuals with Down’s syndrome and their families, and we feel the new resource captures the ‘lived experience’ very effectively and will undoubtedly be well used by anyone looking for good quality, up-to-date and balanced information.

‘We are also pleased to be referenced as an organisation that can provide additional information, advocacy and support at all stages of life.’

Actress Sally Phillips has been raising awareness about Down’s since the birth of her son Olly, 15, and in 2016 released a documentary called A World Without Down’s Syndrome?

The Miranda star tearfully accused the NHS of pressuring pregnant women into having an abortion if they are carrying a baby with Down’s syndrome in June.

In an emotional speech, she told hundreds of world-leading obstetricians in London that ‘eugenic thinking’ has seeped into the NHS and people with Down’s were being treated like a ‘population of toads that must be managed’.

Around nine out of ten British women have abortions after being given a diagnosis for Down’s, which leads to some degree of learning disability and delayed development.

Miss Phillips, 50, who starred in Bridget Jones’s Diary and the BBC sitcom Miranda, said a simple blood test to detect the condition was gradually being introduced by the NHS and had led to a rise in abortions.