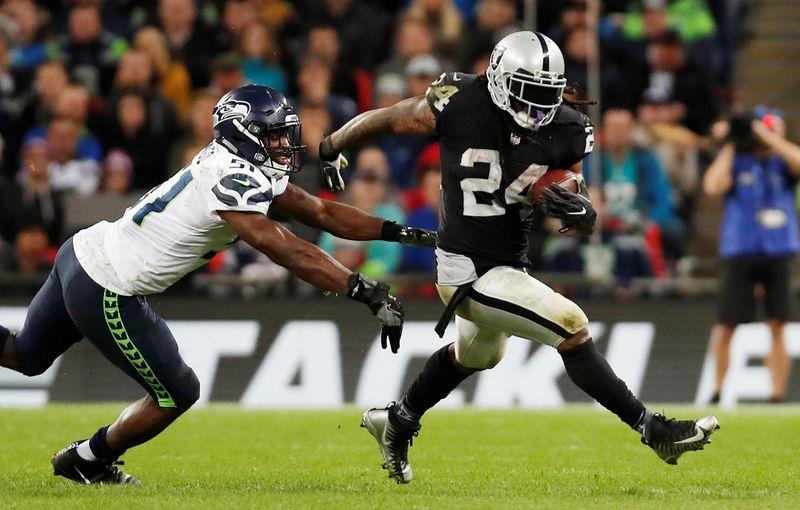 (Reuters) – With a divisional title on the line in a battle between two longtime NFL rivals, Sunday’s clash between the San Francisco 49ers and the Seattle Seahawks had seemingly reached the height of anticipation and excitement.

But then 33-year-old running back Marshawn Lynch signed a one-year deal with his longtime Seahawks after many thought he was done with the sport, in the process setting the internet ablaze as fans rejoiced at his return.

One of just 31 players to rush for 10,000 yards in his career, Lynch became a fan favorite during his time with the Seahawks, earning the nickname “Beastmode” from his unstoppable on-field performances and vibrant persona.

His return to Seattle after signing a one-year deal with the team on Monday to patch up its injury-rattled squad has dominated headlines and stolen some of the spotlight away from an otherwise critical fight for NFC West supremacy.

“Super excited just to have Marshawn back, Beastmode, he’s been great,” said quarterback Russell Wilson, who praised his team mate’s physical preparedness despite not playing all season.

“He’s got some special things he can do,” Wilson added.

“He’s a living legend, an icon here in the city and across the NFL,” linebacker KJ Wright told reporters.

The five-time Pro Bowler returns to Seattle after leaving in 2016, then signing on for a two-season pitstop with his hometown Oakland Raiders.

Lynch made clear he plans to make an impact during Sunday’s grudge match, selling on his website apparel emblazoned with the motto “Unfinished Business” in the team’s classic blue and green — although the veteran remained notoriously tight-lipped about his plans.

Lynch told reporters “Happy holidays, merry New Year” at a re-signing news conference on Tuesday before walking away, years after famously attending the Super Bowl XLIX media day, only to tell reporters “I’m here so I won’t get fined.”

Head coach Pete Carroll told a news conference on Tuesday that Lynch had taken a “very serious” approach to his return.

“He brings a lot to the table,” said Carroll. “When you get to add somebody like that to your team, it only helps and enhances the mentality we cherish already.”