New York man, 52, walks again after learning back pain was a rare form of HEART DISEASE


A New York City father-of-two learned that his back pain and loss of movement was actually from a genetic heart condition and not nerve problems.

Rick Weber, 52, was an active cyclist for years but, in 2016, he began feeling pain in his back and legs.

Doctors repeatedly misdiagnosed him and attributed his condition to back problems and neurological issues.

The pain got so bad that Weber went from using a cane to eventually being confined to a wheelchair.

Finally, three years after his pain first began, doctors noticed a build-up of an abnormal protein in his nerves and, specifically, his heart.

It turns out that Weber was actually suffering from a condition known as cardiac amyloidosis (‘stiff heart syndrome’), which occurs when these abnormal protein deposits replace normal heart muscle.

The organ becomes stiff and is unable to pump blood properly, which is the early stages of heart failure.

Now that he’s on the correct medication to treat the condition, Weber is finally walking again and is planning to celebrate first Father’s Day in years during which he finally feels healthy once more. 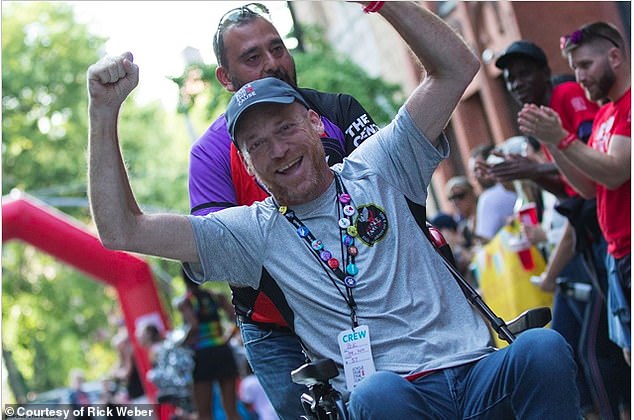 Rick Weber, 52, from New York City, discovered the back pain that left him a wheelchair was due to a genetic heart condition. Pictured: Weber in a wheelchair in September 2019 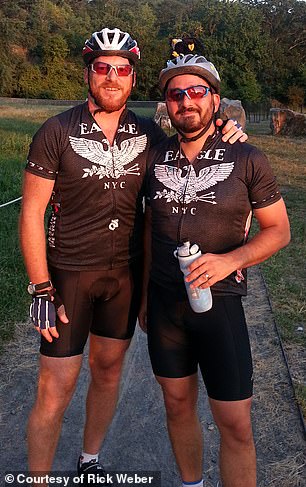 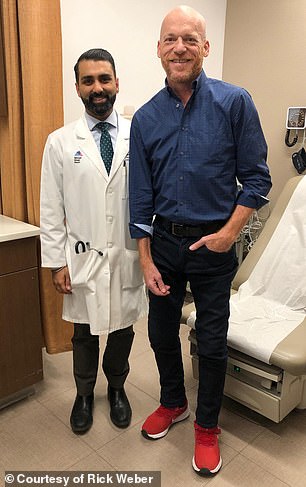 Weber was avid cyclist who often bicycled from Boston to New York in charity races. In 2016, he began experiencing pain in his back with various doctors telling him it was neuropathy, pinched nerves and spinal stenosis. Pictured; Weber participating in the Northeast AIDS Bike Ride, left; and Weber with Dr Sumeet Mitter at Mount Sinai on March 5, 2020, right

Weber told DailyMail.com that, for many years, he was an avid long-distance cyclist and a part-time spinning instructor.

He participated in many a charity ride, including the Northeast AIDS Ride, a three-day, 275-mile bike ride from Boston to New York.

His only injury came in his 20s, during which he suffered a herniated disc, but surgery quickly amended the issue.

Then, in 2016, he started feeling pain in his back as well as numbness and tingling in his feet.

Weber, who was diagnosed as HIV-positive in 2004, went to a neurologist who told him he had neuropathy due to HIV.

‘I go back to my primary doctor and he’s like: “No, no you don’t There are not neuropathy symptoms from HIV,”‘ he said.

One doctor told him he had pinched nerves in his back and legs while another said he had spinal stenosis, or nerve issues.

A second neurologist said he had crushed discs in his spinal cord.

Over the course of two years, Weber underwent two back surgeries and multiple physical therapy sessions. But he still had the exact same problem. 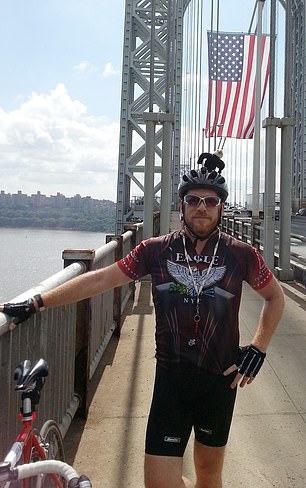 Two back surgeries and multiple rounds of physical therapy didn’t help. Pictured: Weber participating in the Northeast AIDS Bike Ride before his illness

When he walked his daughter, Marie, down the aisle at her wedding in September 2018, he was using a cane.

Eventually, the pain began to be so bad that he started using a wheelchair. He had to take an Uber to a CVS Pharmacy two blocks away from his home because it hurt too much to walk.

In one year, he was spending $600 per month on transportation.

‘I had pain all the time,’ Weber said.

‘All you know is hurts to move and it hurts to sleep. And you ask: “What can I do to stop the pain?”

Finally, in November 2018, he went to a third neurologist, who suspected that Weber was suffering from cardiac amyloidosis.

This is a condition that occurs when plaques of a protein byproduct known as amyloids build up in the heart muscle.

The heart becomes stiff and is unable to pump blood, effectively putting someone in the early stages of heart failure.

A biopsy detected amyloids in his ankles, both of his wrists and his heart. 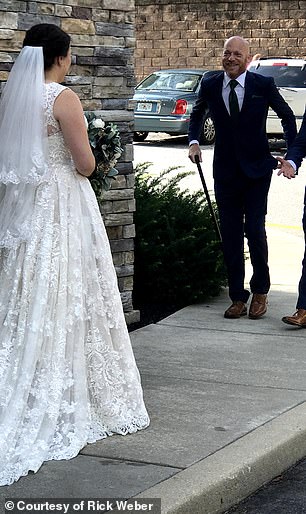 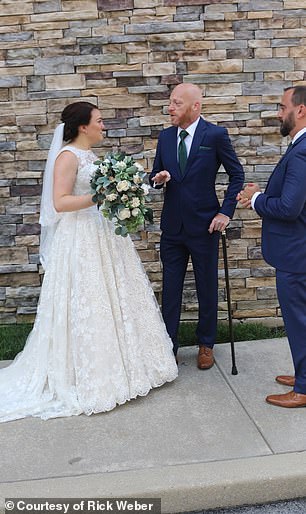 By September 2018, at his daughter’s wedding (left and right), he was using a cane and sometimes a wheelchair. In November 2018, a third neurologist finally discovered Weber’s back pain was caused by a heart condition called cardiac amyloidosis

Cardiac amyloidosis occurs when protein byproducts are deposited in the heart and it’s unable to properly circulate blood. Pictured: Weber walking his daughter down the aisle, September 2018

‘He has a mutation that led to system amyloidosis,’ Dr Sumeet Mitter, director of the cardiac amyloidosis program at The Mount Sinai Hospital in New York, told DailyMail.com

‘There’s a protein made by the liver. Either with age or due to a genetic mutation, it breaks downs and forms deposits in different organs.’

‘At the time I met Rick, he was pretty much stuck in a wheelchair. He had multiple spinal procedures, he was starting to retain some fluid,’ Dr Mitter said.

‘Basically his heart couldn’t circulate the blood as efficiently as someone who didn’t have this process.’

Because amyloidosis is rare, it is often not diagnosed until someone is in the late stages of heart failure, sometimes even in need of a transplant.

Weber was put on a drug called Onpattro, a medication that silences production of this protein. If patients can’t produce the protein, it can’t deposit in the nerves or in the heart.

After several months of taking the drug, Weber went on his ‘first vacation in years’ with his family to Québec, Canada. 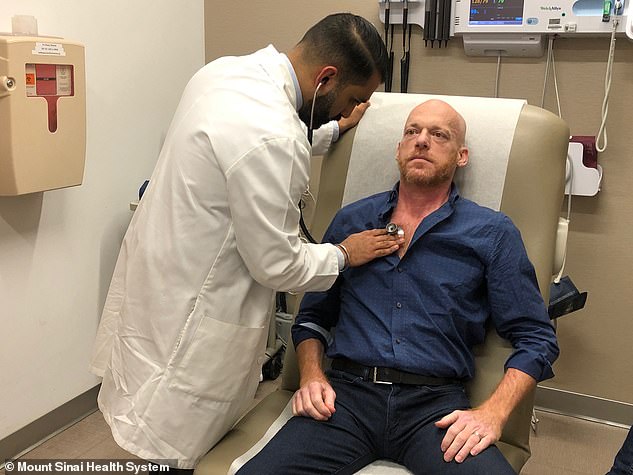 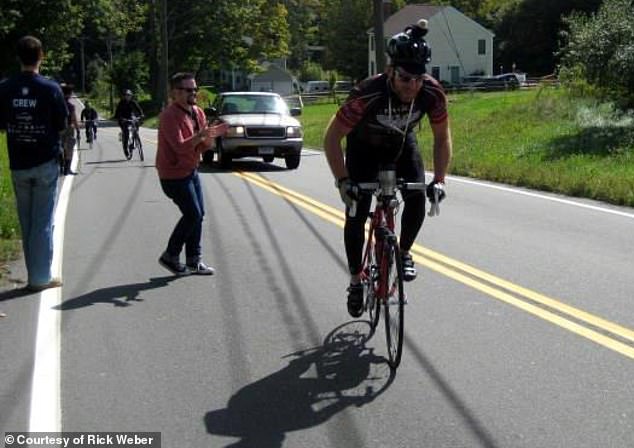 The father-of-two his spending his first Father’s Day in years feeling healthy and wants to eventually cycle again. Pictured: Weber participating in the Northeast AIDS Bike Ride before his illness

‘I took my wheelchair, but there’s snow and ice on the ground in Montréal. You can’t be pushed around in a wheelchair,’ he said.

A couple of weeks later, Weber visited Dr Mitter and took his first steps down the hallway in front of him. The physician was shocked.

‘I never would have thought that after starting therapy…before the pandemic, I was going to see him walking down a hallway,’ Dr Mitter said.

‘It’s just phenomenal. For someone who was athletic and riding a bicycle to being in a wheelchair and now walking down a hallway, it blew my mind

It’s one of the few times I teared up as a physician. I’m just so happy for him.’

Weber, who just learned he is going to be a grandfather, said his next goal is to get back cycling again so he’s continuing physical therapy and exercising in a pool at his home in Fire Island, New York.

He said he hopes his story teaches other people that they are their own best advocates and to push for a diagnosis.

‘You have to believe in yourself, you have to trust yourself and your body,’ Weber said.

‘You know your body better than the doctor knows your body. You have the right to believe that your body is telling you something and you have to listen to it and you can’t give up until you have a diagnosis.’ 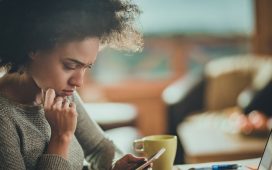 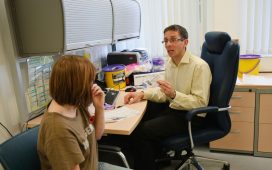 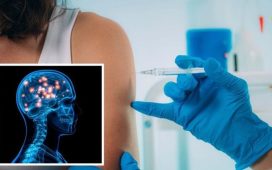 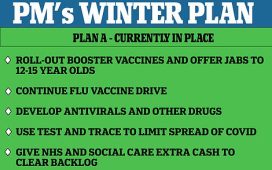 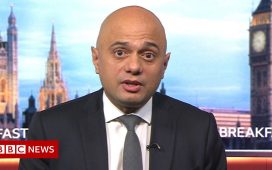 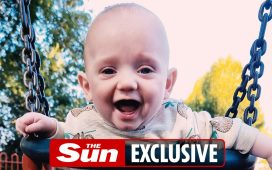